On The Way Out - Soon

Well, we are at the airport, waiting on our flight to Japan.  We've been here about 6 hours now and we have 6-8 hours or so to go until we can check in for our flight.  Then another 7-8 hours until we are actually in the air... or so the schedule goes, as far as we know.  Thankfully, there is a USO at this airport.  It is my first experience with them (Jeff has had quite a bit of USO encounters over his career) and I've been pleasantly surprised at how nice our HOURS stuck at the airport are going. 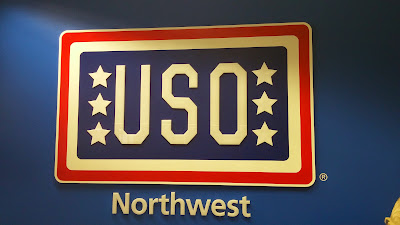 It has been a crazy trip even just getting to the airport.  We had to make a detour of 400 miles or so on our drive from South Dakota to the Seattle airport, to get our pets cleared to travel.  (long story)

I am SO eager to finally get to where we are going, get in our new house, and start getting settled in to where we will be living for the next four years.  It's been very hard not being able to get into much of a creative mode for weeks now, but I have been stitching some: 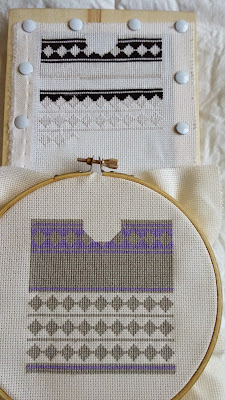 I've even finished a saddle pad, one that I had started a few weeks or so ago: 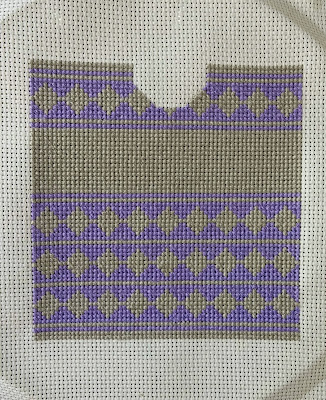 I really do like this new pattern and I've already started another one, the same pattern, in red and gold.

For some reason I seem to have stalled out on the very first one (black and white) and I did pack it away in one of (many) boxes we sent to ourselves, because I wasn't sure what airport security would think of the tons of thumb tacks in my laser cut frame - ha!  As it is, I'm hoping what I had researched about being allowed to bring an embroidery needle on a plane is correct.  I've read that it is okay to do now, but if not, I'm prepared to toss the needle I have with me.  I do hope I'll be able to take it, so that I might do some stitching on the plane. 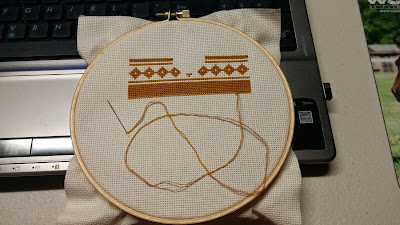 Another thing I've been doing, to partially satisfy the creative bug, is get back into Pinterest.  It's been a little while since I've been sucked in there.  I've been finding a lot of pins for my Craft Storage board (dreaming of setting up my new Studio!) and also a ton of tutorials on making Miniature things.  That one is mostly geared toward possible model horse applications... Mostly for photo showing ideas.  I'm planning to get (back) into photo showing while we are overseas, since I'm highly doubtful there are any live shows over there.  (but hey, maybe I'm wrong... or maybe I'll start some...??)

I suppose that's enough rambling for now.  I'm hoping to get back to regular blogging as soon as we are in our new home - and have an Internet connection.  I have a TON of things I could blog about that have happened over the past few weeks: trips we've gone on, along with hundreds of pictures I've taken along the way.  I figure I can always share some of that until our household goods arrive and I can start MAKING STUFF once again.  :)