A book that made quite an impression on me when I was a teenager was called, Solo: The Story of an African Wild Dog. 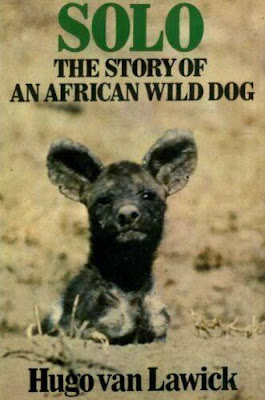 Book cover image from an eBay listing.
I discovered it, as I did many books, at the local library.  I grew up watching all sorts of nature documentaries and loving all sorts of animals.  The African Wild Dog, Cape Hunting Dog, Painted Dog, dog of many names, was always a favorite.

That book came back to my mind when Breyer announced the latest model horse in their Wild Animal series last month.  Named "Kalahari", he is the Marwari mold, with a pattern inspired by the African Wild Dog.  I've entered for all of the lottery style models and had only been drawn once before.

I was SO happy to have been drawn from the waitlist for Kalahari. 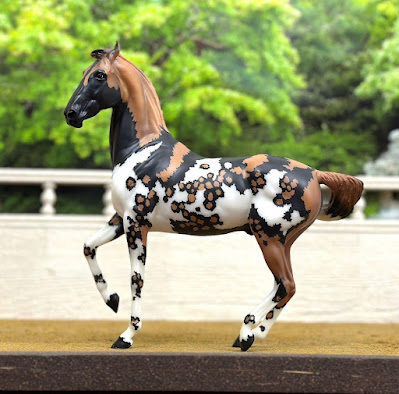 I think he is SUPER cool.  This is also the first picture taken at the latest version of my photo setup.  The footing and background I've used before, but this was done with new lighting and a new camera.  I think I'll be able to get some really nice pictures here.

Posted by Horse Tender at 7:53 PM No comments:

Lately, I've been working on a big painting project that is not model horse related.  I've been painting many sheets of OSB to put walls on the chicken coops and Bo's house that have now been framed and have roofs put on. 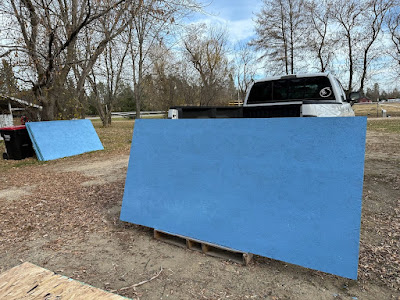 I debated what color to paint them.  Typical farm colors are red with white trim, but was the color of everything on the farm in North Dakota and I didn't want to do that again.  I decided to go with another color I've seen used before, a sort of grey/blue.  The color I chose is called "Blue Persia".  It's more blue than grey, especially in photos, I've noticed.

The people at the local hardware store teased me a bit, saying my chickens must be spoiled when I mentioned what it was for.  Why?  I suppose maybe it's not usual for someone to buy custom mix of paint for a chicken coop.  Or maybe it was the fancy name of the paint, haha.

I have about a dozen sheets painted.  It takes me an hour to do each one.  I'm only doing one coat, but putting it on thick enough, and in all different directions, to get down into all the fibers of the OSB.

For reference, here are the structures they will be going on.  The two chicken coops: 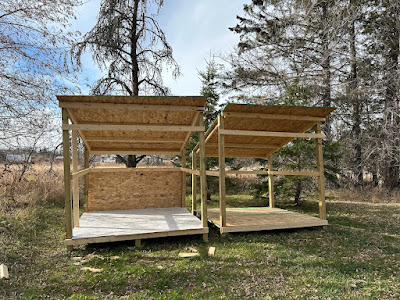 (if they look crooked - particularly the one on the left - it's because they are.  That one, for sure, is built on very uneven ground)

Here's Bo's house, just before the roof was laid on: 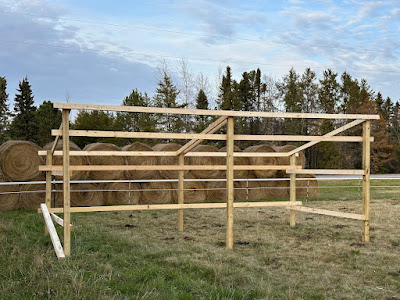 And here's Bo, "helping" with the roof project: 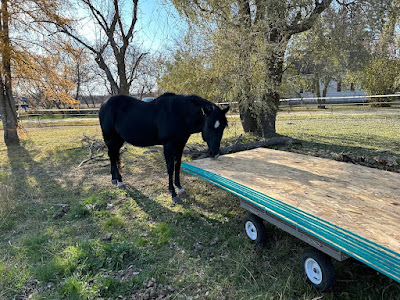 I've had a lot more (real) help in the form of the new relationship I mentioned a few posts ago.  Very shortly after moving to Minnesota - and while NOT looking for a relationship... one found me.  I could go on about him quite a bit and I may, if there's any interest in that - ha!  For now, I'll say that he has helped me a great deal in tackling my decision paralysis and getting these started (and with so many more things).

The hope is to make more progress on construction this week.  I'm almost out of paint, I'd bought two gallons.  I actually have another gallon of a very similar color I had bought for laser projects.  I may just use that...

Or go back and get another gallon of bougie Blue Persia.

A suggestion was made that I write about my animals, which I don't think I had done in a while - even before my latest blog hiatus.  So, here they are!

First up is Bo, he is a 2001 APHA stallion.  He's solid black, "a Paint that ain't" and is, by far, the best horse I've ever had or worked with.  I first saw him and agreed to buy him when he was only 1 month old.  We've been together for a long time and have had many, many adventures together. 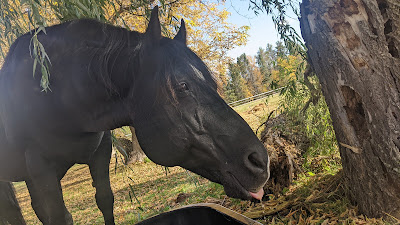 Next is Tealight, my kitty.  I adopted her from a shelter in South Dakota about 12 years ago, when she was about 2 years old.  She went with me to Japan and back.  She's a little world traveling former street cat.  She is very sweet, super soft, and always knows when I'm upset.  One of her nicknames is "Empathy Cat". 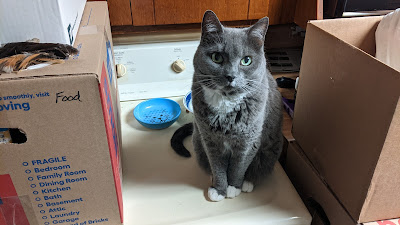 Then there's Jabba.  He is a tiger salamander I've had for probably 13 years and I estimate he was 2-3 years old (or older?) when I got him.  I joke that he is the world's oldest salamander.  He got his name because when I first got him I was overfeeding him and he became quite..  Jabba-like.  He is a super cool, chill little dude. 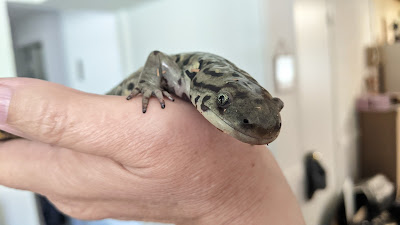 The most recent addition to my menagerie are my chickens.  I have a bunch of them.  I had way more, but split up my flock when I sold my farm in North Dakota and moved to Minnesota.  Here's a quick look at where most of them are right now, in my back yard. 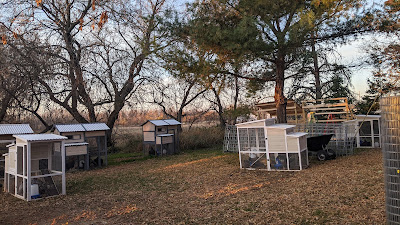 Most of my chickens are rare or unusual breeds, here is my group of French Black Copper Marans, hanging out in the yard.  Everyone mostly stays penned up here, because this place is on a very busy highway.  Also there are a lot more predator concerns here. 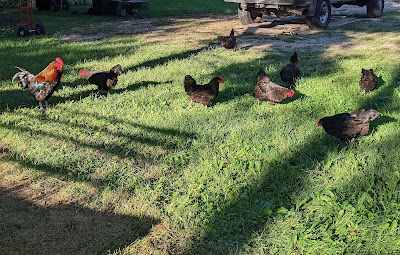 One of my favorite breeds are the Polish, with their silly hairdos.  Here's a recent conversation at the water cooler once morning. 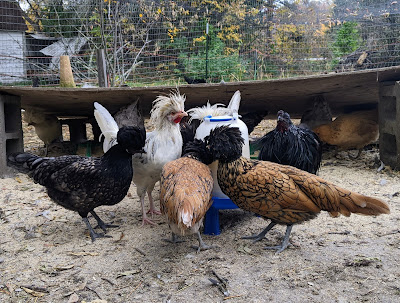 Here are the most recent additions to my flock.  I ordered a bunch of rare breed chicks from a breeder and they arrived just a few days ago.  Baby chicks are one of the cutest things ever.  I'm very excited about these wee poof balls. 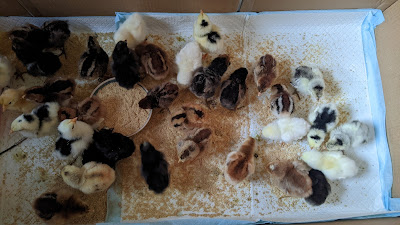 While not my pets, I have absolutely loved how much wildlife there is here in my new home (even if that means more predator concerns for the chickens).  One thing I've seen a TON of, right here in my yard, are frogs and toads, many of them very little.  This is probably the smallest and cutest one I had found. 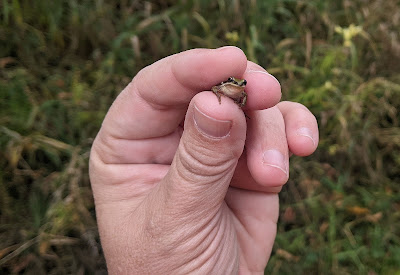 I hope you enjoyed meeting my little zoo!

I don't even know where to start.

Yep, I fell off the blog train and laid in the ditch for months, but I'm..  back?

SO much has happened.  Divorce, a massive move, saying goodbye to one big dream, taking many more on the road with me, crying, swearing, hopelessness, followed by more happiness than I ever thought possible, and the cherry on top: an unexpected, incredible new relationship.

Rather than dig into all of that (maybe later), let's move forward, shall we?  Perhaps at the speed of a FLYING trot. 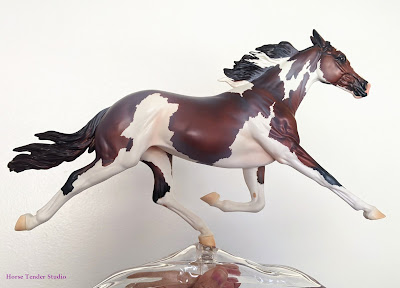 Constantia, the newest Breyer Premier Club horse, arrived here at my new home today.  She is, in a word: EPIC.

I'm very impressed with both of them.  When I was a kid getting started with Breyer horses, I couldn't even imagine OF Breyers looking like either of these.

That being said, I've decided to take the leap into being an artist who customizes the new hotness, so stay tuned for custom horses on both of these molds.  I have a few of each mold on the way, or already here.  I will pick the best for my OF collection (though I still try to say I'm not an OF collector, they can also be tack models!) and then start prepping the others.

For Zafirah, I plan to do an appaloosa colored Half Arabian repaint on one, undecided on the other.  I'm leaning toward a resculpt on the second one, still not sure on color.

For Constantia, I will do a liver chestnut repaint on one, undecided on the other.  If I was REALLY brave, I'd attempt a dapple grey.  Or a portrait of Greyhound ( I would looove to do that).  I'm not sure I'm that brave yet.

It's good to be "back", I certainly have a LOT to share.  To narrow it down I thought it'd be fun to ask you, my dear, patient readers:

Well, hey, I haven't blogged about her - or anything - since I started prep work.  Is anyone surprised?  I'm not, haha...

Reporting to you, Live from Denver, the day after BreyerWest, to say that my NaMoPaiMo horse is done! 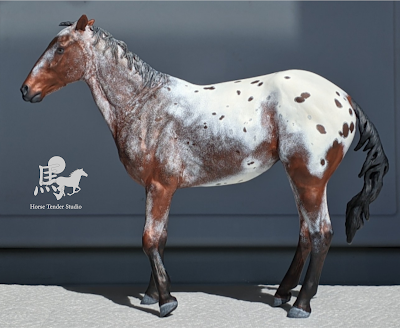 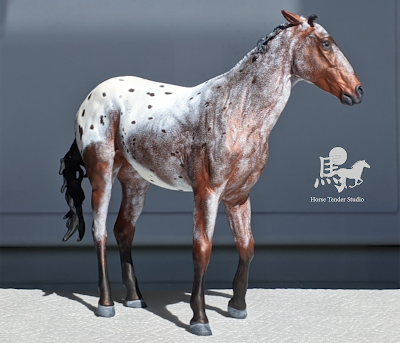 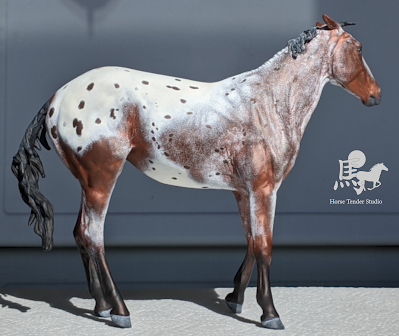 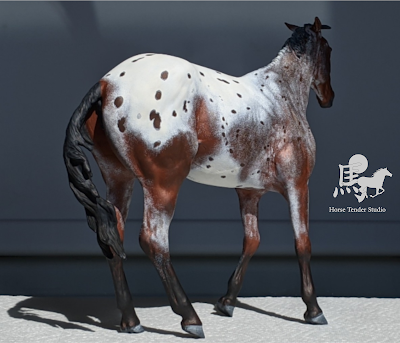 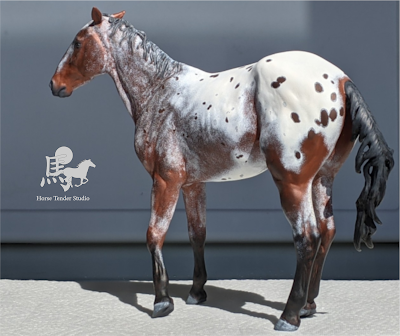 She does not have an official name yet, but I'm thinking Ordinary Life, maybe "Ordie" for short.  Subject to change, I'm still ruminating on that.  There's a story behind it, to be expected, but that's a story for another day.

I'm happy she is done and even more: happy that I'm happy with her.

I do have in progress pictures from along the way and would like to share them to show her progression, hopefully soon.  For now though, I'm exhausted and hungry.  Next up: either take a nap or finally eating something.

Today I did a bit of prep work on my NaMoPaiMo horse.  She was in primer, from a few days ago. 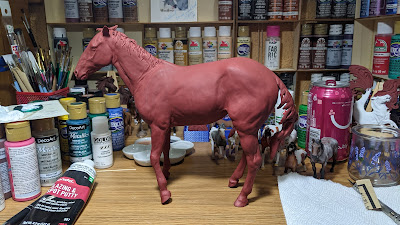 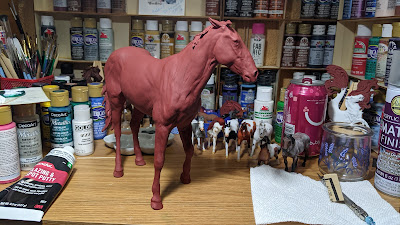 I did a little scraping with a carbide scraper and a bunch of sanding with fine sandpaper.  Also, I roughed up the areas around a few sunken seams that need to be filled.  I'll use the Bondo spot putty for that and plan to put that on tomorrow.
Here's how she looked after prep session 2 or 3 of...? 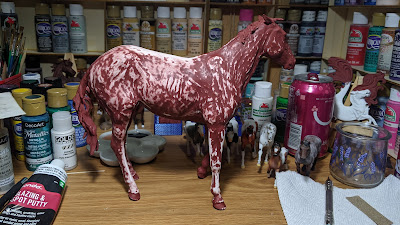 She looks like she's already done with my nonsense.
Posted by Horse Tender at 10:07 PM 3 comments: 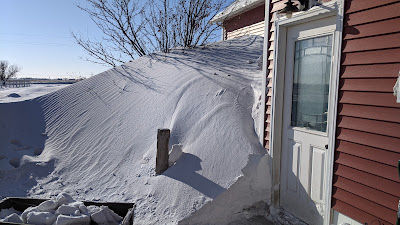 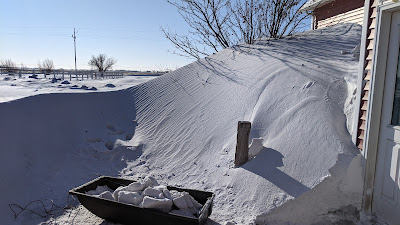 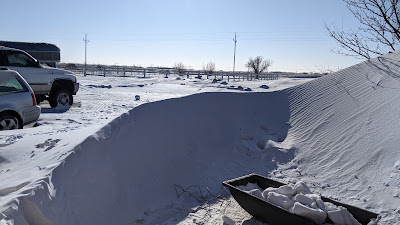 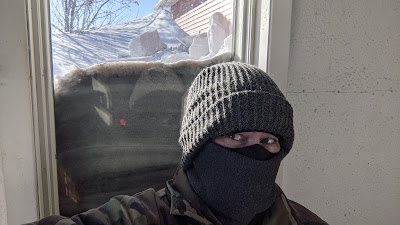