Back towards the end of January, I did a post on my goals for the year.  I thought that I'd revisit that list, see how I'm doing, and decide what to work on for the last two months of the year.  (yes, it is flying by, isn't it?)

Here's the list of goals I had set and my notes on where I'm at with them now:


--- Keep up my blogging momentum
I've done pretty well with this I think, overseas move and all!  I was able to do daily posts for a few months before the move and thing were a little sporadic over the summer.  But I'm on track to finish strong for the year.  Hoping to do daily, or near daily posts this month and for December.


--- Organize my collection of horses
Well... not so good here, especially since my OF collection is all still (safely) packed away.  I need to finish figuring out my earthquake proofing before they come out.

Recently I did see this post on Rachel Fail's blog about organizing her show string and it got me excited about some options to organize my herd.


--- Finish my Rio Rondo saddle and build more tack
Hmm...  not so good here either.  I did get some parts of it out not too long ago to show a local crafty person, when I was trying to explain more about model horse stuff.  That did make me want to get back to work on it.  I'm hopeful that maybe I will finish it this year.  Added bonus: I now have pounce wheels to do the stitch marks before I put it all together.  Maybe, sometimes, procrastinating is not so awful...  ;)


--- Make progress on the Stagecoach
The stagecoach has not even seen the light of day since arriving in Japan.  The box is sitting on a shelf in the studio, waiting for me to get back to work.


--- Create several new custom horses
I did finish 5 new horses for the show that I went to back in early March... although it dawns on me now that I don't think I ever properly photographed them afterwards.  It appears that I did do a tiny post about them the night before the show, but I never did take those pictures.

Here's a picture of the table in the motel room when I was working on them, and others.  ;) 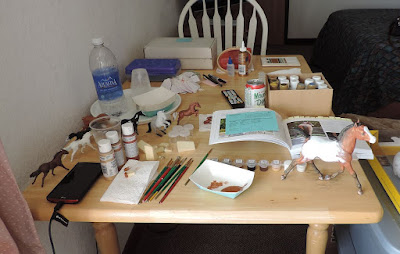 --- Attend a couple of live shows
I did this!  One at the end of February and another one (or two) - a double show, in early March.


--- Thin out my crafting stash
Nor did I really do this.  I did get rid of some stuff, but once I found out I would have my own studio room again, I, uh, sorta just brought everything else with me.  This is something I should still probably do, since I just don't have time to make ALL the things that I'd like to.


--- Get all finished work posted
Eh, not so much.  However, I did finally get some of my cross-stitch saddle pads listed on Etsy for the very first time.


--- Do more giveaways/donations
I did donate a couple of saddle pads to be raffle prizes at one of the live shows.  Also, I'm cooking up some more giveaways right now to finish out the year.

Okay, so that's the recap!  I think I'm doing okay overall, but it was good to go over this list again and ponder the things that I had wanted to get done.  I'm hoping to finish out the year on a high note, having gotten even more of these goals crossed off the list.