I've talked a bit about the "horse club" which ended up being two horse clubs - a general riding/Yabusame club and a seperate club with a focus on English style riding and jumping.

As of late July/early August there is a third club in the area, brand new.  It is the Misawa Horse Park and is closest of all, only about 10 miles away!  They are another general riding/Yabusame club and are being built from the ground up.  Right now they have four horses, or as most might think, based on size: three ponies and one horse.

Back in early August, a Japanese friend arranged for me to visit the park, right after they initially opened.  She served as my translator for setting up the visit and while we were there.  I was offered a ride on one of their horses and most happily accepted.

I rode "Mulan", probably considered a pony by height, but very stocky.  She is a sweetheart. 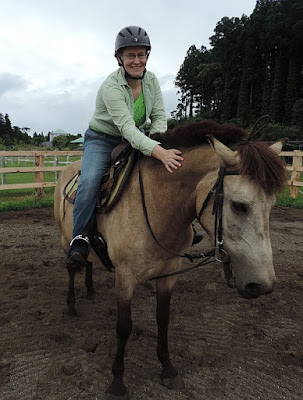 She is also a Yabusame horse and came to the Misawa club from the other Yabusame club.

I was introduced to all four of the horses at the Misawa club, but could only remember one other name, in addition to Mulan.  That was Judy.  Easy to remember, since Judy is the name of my sweet dressage instructor and friend back in South Dakota.  Judy is the one "horse" at the park.

This past Monday, my Japanese friend made arrangements for us to have another visit.  I haven't been feeling well the past couple of weeks (the past couple of months if I'm being totally honest), but I hoped a visit to the horses would cheer me up, even on a gloomy, rainy day.

When we got there, the horses were all out in the big pen, eating their breakfasts.  I would have been okay to just watch them and take pictures, but the girl working there asked when horse I wanted to see.  I said any of them would be fine.  She went out and came back with: 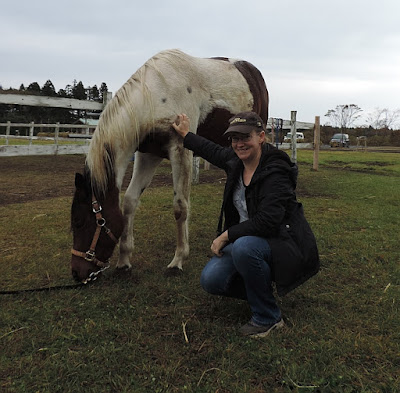 Our entire visit was Judy munching grass while I petted her and inhaled the wet horse smell. 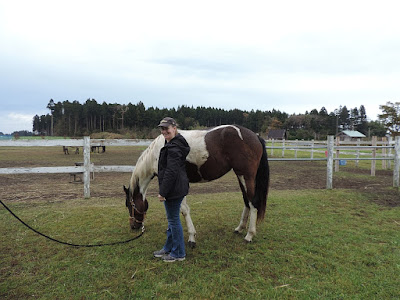 I also took lots of pictures of her.

She had a really pretty halter on, with what appeared to be tooled leather and painted pink flowers.

Unfortunately I didn't get a good picture of it. 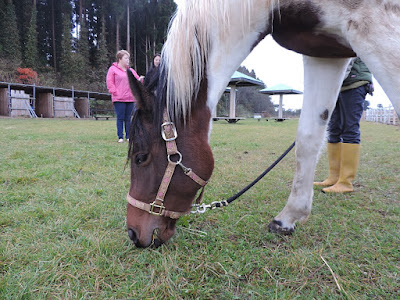 I did get a bunch of pictures of her. Including some closeups.  Pinto horses are such a wealth of interesting markings. 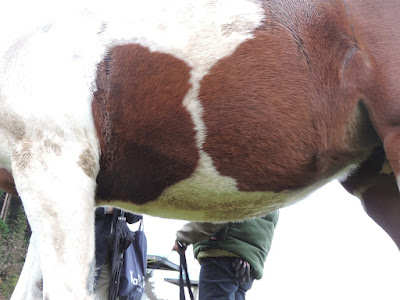 We didn't stay long; it was a cold, rainy day and I didn't want to interrupt the goings on there (though Judy didn't seem to mind having some grass instead of hay).  We did make arrangements for my next visit - this coming Saturday!  I am supposed to meet with another Japanese woman who is taking Yabusame lessons there and speaks English.  I'm looking forward to maybe making another horse friend here and being around the horses again.