Part three of my look at the Strong Horse Iron Pull event that we went to.  You can find part one here and part two here.  In this one, I'm going to show off the horses, followed by a post for the ponies.

The day started with the BIG horses. 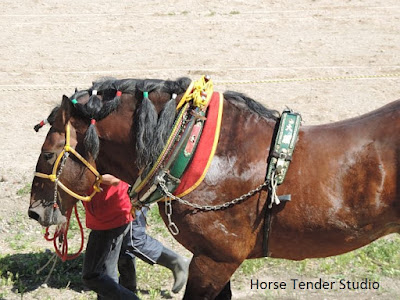 After several races with the heavyweights, a lighter type of horse came out. 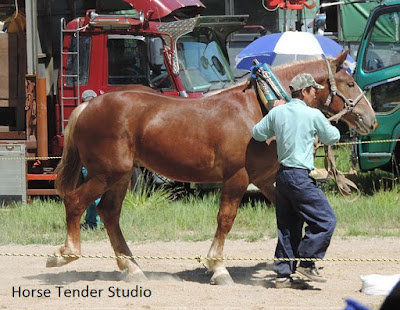 Most of the horses were quiet and well behaved. 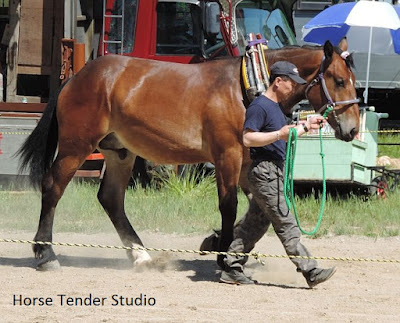 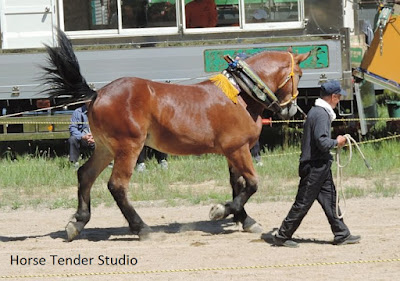 That one, in particular, was very spirited. 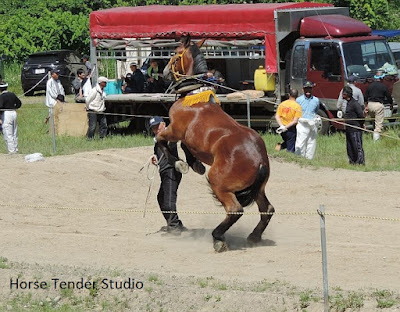 They even took him well off to the side to finish harnessing him up before his turn to race.  Most horses were harnessed up in or right in front of the starting area, but not this one. 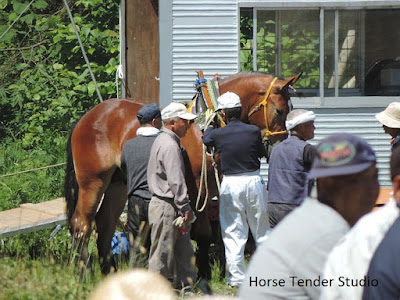 An interesting thing was that, as far as I could tell, all of the horses were stallions.

We decided at one point to go walk around to the other side of the track and see if we could get a closer look at some of the horses.  We also saw a few small ponies over there, in amongst the trucks, so we were curious about them too.

On the way, we walked past the finish line and saw a race coming to an end.  I took a few pictures and realized that the person leading the horse is also helping them pull!  I had seen the end of the lead rope being wrapped around the pull chains at the start of each race and wasn't sure why they did that - maybe to keep the horses or people from tripping on it?  Possibly...  but it appears that the lead person can pull with the horse too. 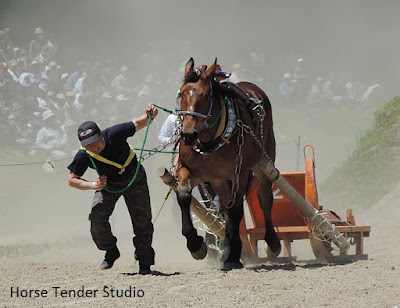 Continuing around, toward the "backside", we passed this huge guy. 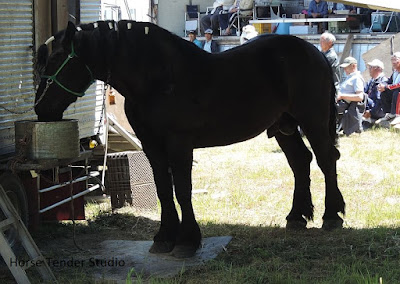 We stood and watched him for a bit, he was trying to make sure his feed bucket was completely empty.  He reminded us of another black horse we know...  (my Bo boy) 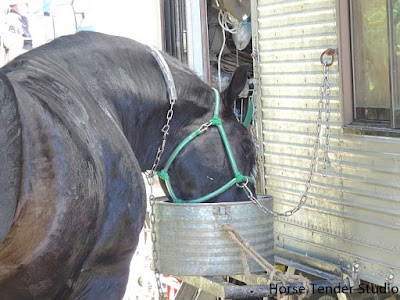 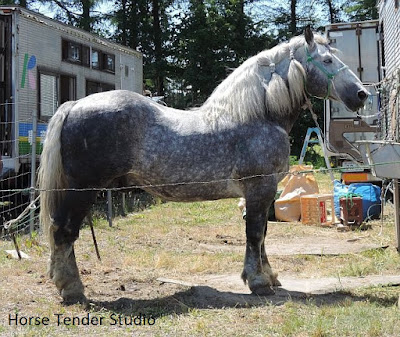 He was so impressive.  I took a ton of pictures of him, just standing there.  I noticed there were other people taking pictures, every time we passed by.  I wonder if he was some sort of celebrity here, or if everyone else was just in awe of him for his size and coloring like I was.  It's hard to say. 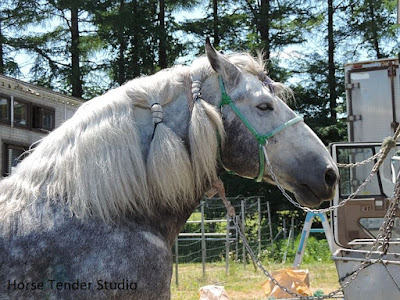 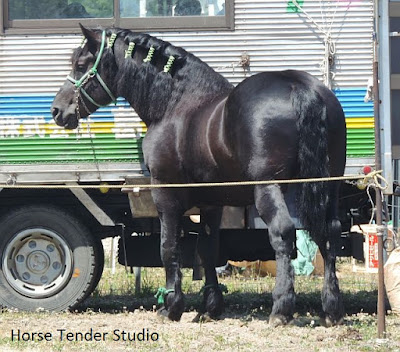 A close encounter with one of the big ones.  We'd made it around to where all of the trucks were parked, when this big guy passed by. 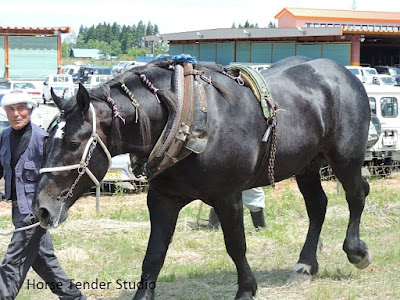 This horse's coloring was quite beautiful and I took a bunch of pictures of him too.  He was enjoying a snack of fresh green stuff that was given to him.  (he ended up being quite a handful once they got him out onto the track!) 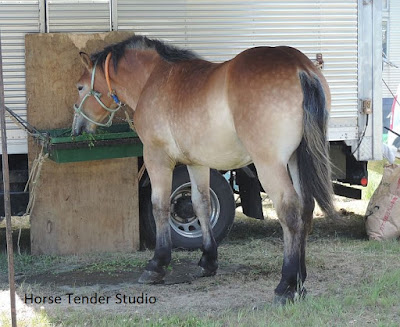 We had gotten a glimpse of another dapple grey and Jeff found him again, off behind a truck on the outskirts of the area. 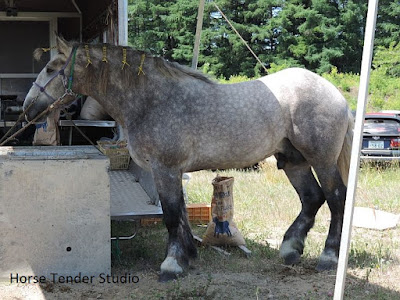 He was a big, beautiful boy too. 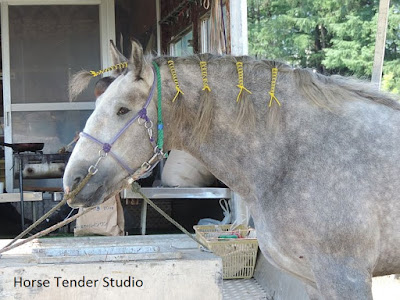 A demonstration of why many of the horses were standing on rubber mats, this one was not: 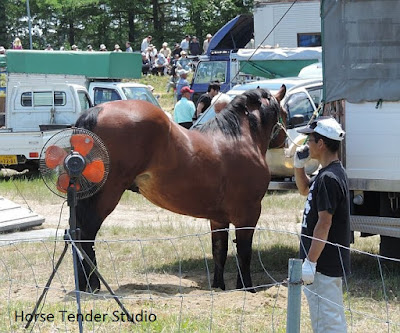 Another one parading on the track before his run. 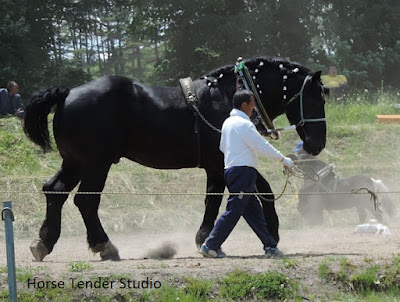 His opponent was this stunning dark grey. 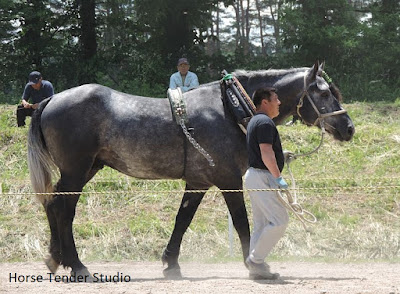 We returned to the viewing area and I took another picture of the dark grey after his run, on his walk back to his truck. 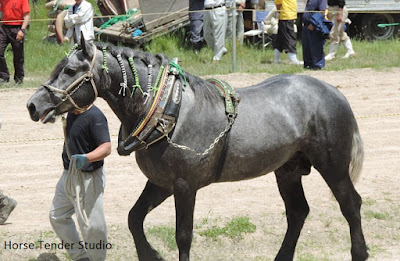 Off in the distance at one point was this handsome fellow. 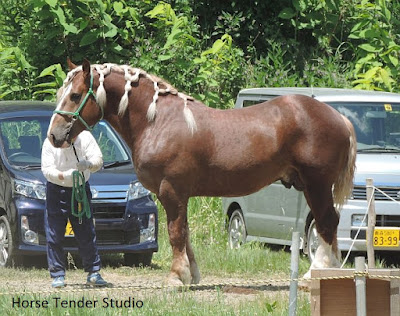 The second dapple grey we saw off to one side in the back was walked around quite a bit before he was harnessed for his run.  He turned out to be quite a (large!) handful.  As he was walked back and forth in front of the viewing area, he did a few impressive rears, but sadly I didn't manage to capture any of them 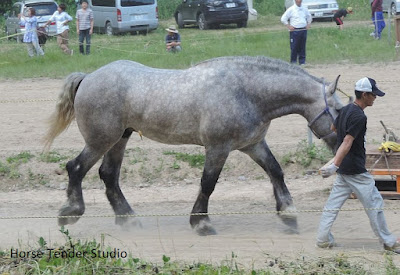 Oh my, look at this bay. 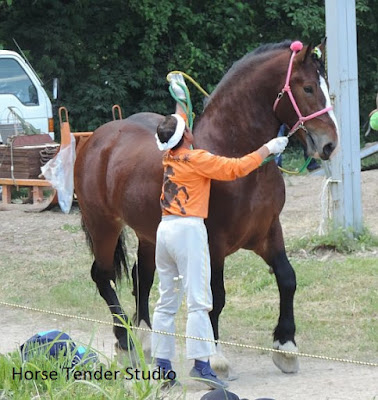 He was a bit of a handful too, he thought very highly of himself I think (and rightly so!) but he managed to stay fairly composed. 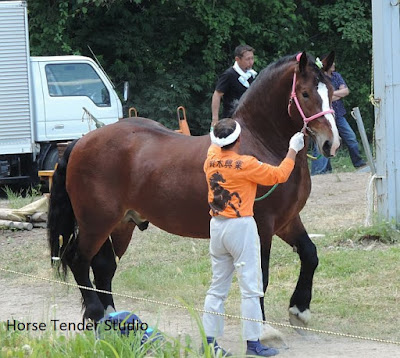 "Regal" was the word that came to mind, watching him parade around. 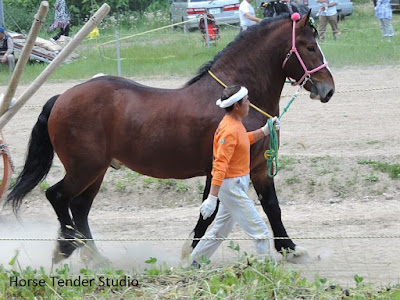 There was an intermission/lunch break (during which I, with the help of my phone, learned that American Pharoah had won the Belmont and the Triple Crown just hours before).  As we wandered to the market area to buy some lunch, I couldn't help myself, I had to take more pictures of this guy (along with several other people). 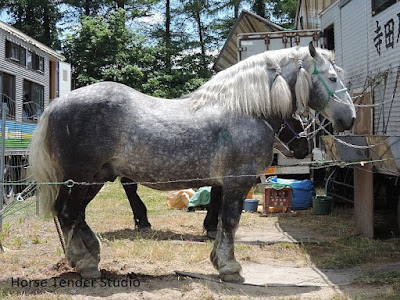 After the intermission, the other grey was on the track, harnessed up. 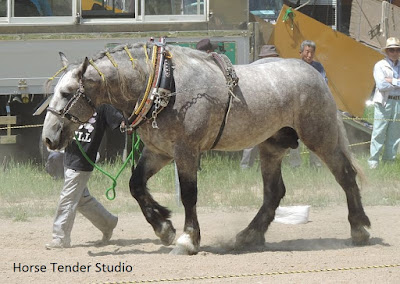 As was the Regal bay.  He had so much presence. 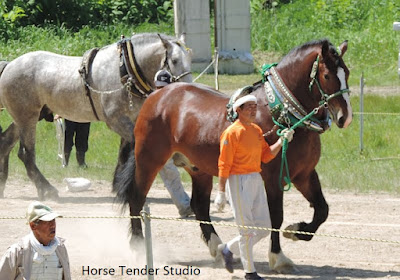 Those two raced each other and it was... interesting.  The grey had several false starts and then one big one where he charged out of the starting area, dragging the sled well out of it.  A bunch of men tried to push the sled back into line, but they couldn't budge it.  Finally, a front end loader was brought over and it was used to drag the sled back into line.  Then they raced!  Mr. Regal won their match by quite a margin.  I don't have any pictures, because I had decided to film the whole thing.

The last horse I took a ton of pictures of was the pretty one who had been eating fresh greens.  Then brought him out and walked him around for quite a while.  I think he was the feistiest one that we saw, he was quite a troublemaker.  This is probably my favorite picture of his shenanigans. 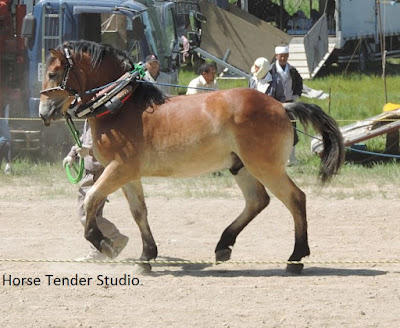 He raced by himself, against the clock I'm assuming, like some of the others did.  He pulled a very light sled and seemed to do well, but the most fun was watching his antics before his race.

I hope you enjoyed a look at some of the "Strong Horses" of the day.  Next up will be the ponies I keep promising.  Trust me, they are worth the wait, haha.