All Work and No Play, Sorta

Yesterday I spent the entire day in crazy work mode, unpacking a ton of boxes, doing more dishes, laundry, organizing the trash and recycling for trash day, etc. etc.  I was exhausted by the end of the day and had declared that today I would spend the entire day in the studio, making stuff!

Well...  I did spend the day in the studio alright, but it was work, work, work in here too.  Basically, I wanted to see if I could find a few more of my supplies before I went into making stuff mode.  Then I decided I'd go ahead and unpack most of the boxes, to see what all I have to find new places for.  That lead to another day of unpacking.

However, it was fun, because I did find more treasure.

I was happy to see that Lionesse survived her ocean crossing! 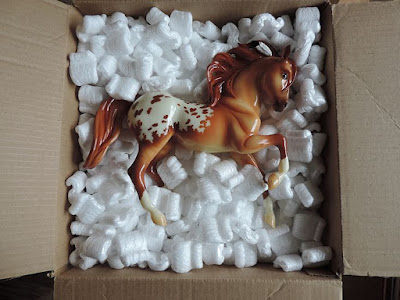 I dusted her off and let her stretch her legs for a minute or two. 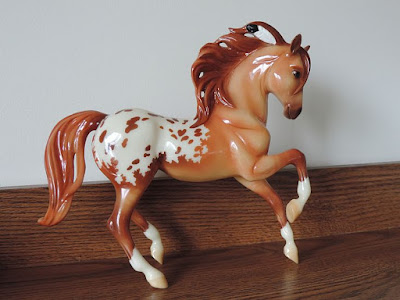 Then, sadly, it was back into the box with her - that's still the safest place to be until I get a quake proof home for her.  She's actually been living in that box since I won her; I've been too afraid to display her, in case something bad happens.  But I do think she's pretty and I'd love to have her out where I can see her.  (I say, now that I'm living in a highly active earthquake area...)

Another good find was the first sighting of some of my bodies. 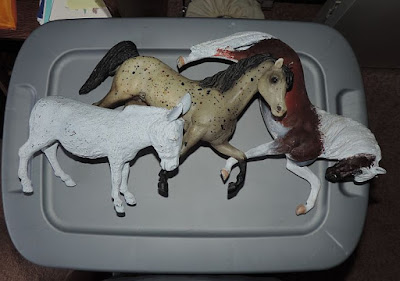 I took them out and put them on a shelf - it's not too big a deal if they tip over.  I also found most of my Stablemate bodies, my heat gun, and my trusty old Dremel.  Except for primer, paint, and sealer (which sadly I was not allowed to bring...), I'm almost ready to start working on custom models again!

Tomorrow I may do some more unpacking in the studio.  I unpacked everything today except the "figurines" (horses) and I think I might take a peek in those boxes tomorrow.  Other than that, tomorrow...