Day 7 of the Copperfox 10 day Challenge is to share your favorite piece in your model horse collection.

This is a tough one.  Especially since it includes horses, and tack.

There are sentimental favorite horses, such as childhood favorite OFs, and a few of my old custom models.  I've also got new favorites too, like: Darkness Falls (classic Black Stallion), Lionesse and my Copperfox Welsh Cob.

For tack, I could say: my old duct tape tack, for fun, or my first ever "real" piece of tack: the first leather halter.  Or how about my still in progress first (leather) western saddle or fancy Arabian costume.  Ack!  There are too many choices, even just in the tack department - and I'm really only getting started there.

I have to admit though, when I first read the words: "favorite model horse", the horse that popped into my mind was this guy: 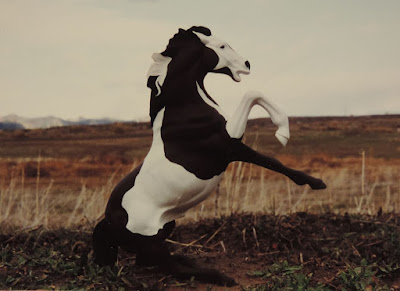 His name is Reckless, after the Bryan Adams album.  He was one of my very first custom horses.  In fact, he might have been the very first one.  I don't remember how old I was when I painted him, but I think I was around 14 or 15. 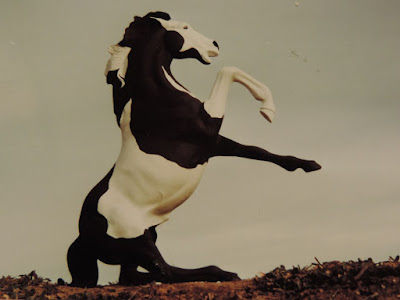 I found the model at a flea market (along with a few other Hartlands)  At the time, I didn't even know what they were, they were cheap horse-shaped objects and that was enough for me to buy them. 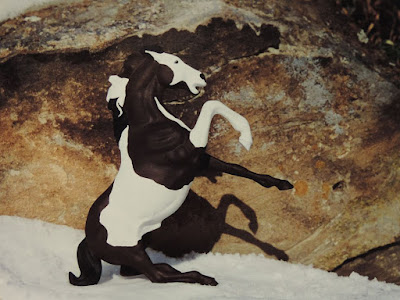 I ended up giving this one a wild paint job and eventually managed to take some cool outdoor pictures of him. 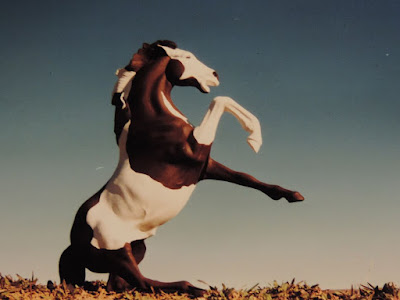 He was almost always photographed from the off side, but I do have a headstudy from his near side. 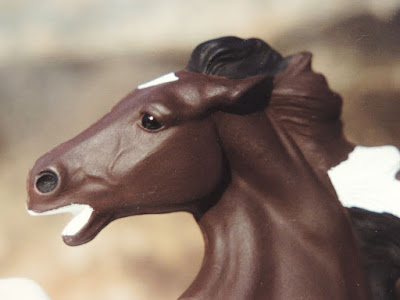 He was a multi-Champion photo show horse, back in the day.  (the pictures in this post are his old show pictures) 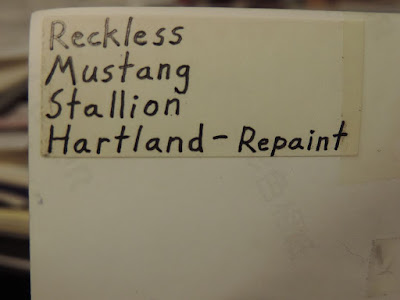 A few judges even sent notes back with the results, saying how "cool" he was.  Sadly my old photo show records were destroyed in the same flood that took my childhood horse books.  Some of the old pictures have water damage, but mercifully most of them survived. 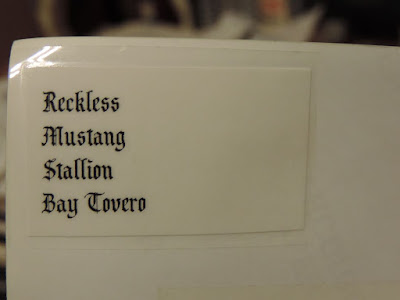 I still have him.  At some point I had spruced him up a bit, adding detailed eyes, and giving him a fresh paint job, same pattern - new paint on top of it.

He was never LSQ, because I didn't know much at the time about correcting mold flaws.  Once my customizing skills had advanced, I often considered doing an overhaul of Reckless, but I could never quite bring myself to do it.  I had also thought about doing a new and improved version of him, basically his coloring (or close enough) on a better model.  Maybe I'll still do that someday...

The back of one of his old show pics.  I'm assuming it was my note for some sort of favorite model class.


Yeah, that about says it all.  It looks like maybe he was the first.

I do have a lot of favorites, but old Reckless has to be number one.