Wild Horses in Japan - Herd One

I had originally thought I'd do one post about them, but I took SO many pictures that I thought I'd break it up into the two herds that we saw.  This will be about the first one.


Back when I first found out that we were moving to Japan, my very first question was, "Will I be able to see horses there?"

I had done a bit of searching right away and the first thing I learned was that there are wild horses far to the north, on the main island.  I read a bit about them here:

From that article, it seemed they were actually about as "wild" as the burros in Custer State Park.  Those are quite comfortable with people and will beg for treats.

The Cape is a place I've wanted to visit ever since we arrived here and this past Saturday, we went up there.  It's about a 2 hour drive north from where we are living.

As soon as we passed through the gate going into the area, we saw a herd of horses, all different colors.  There was no easy place to pull over once through the gate, so I told Jeff that we could go on up to the lighthouse and see what was up there, then come back for the horses.  Jeff was surprised, haha.  My thinking was that gated area has certain hours and I didn't want us to run out of time to see other things and possibly other hoses, when it seemed there was a herd right by the gate that we could walk in to see after we got our car safely back out of the gate in time.  The gate locks for vehicles, but people are still allowed to walk through.

So we drove on up to the lighthouse area, where we saw this sign. 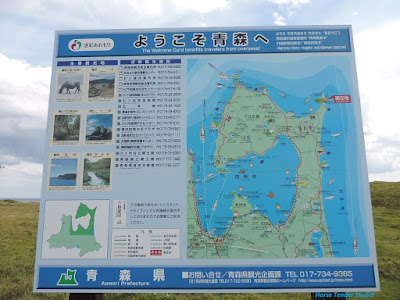 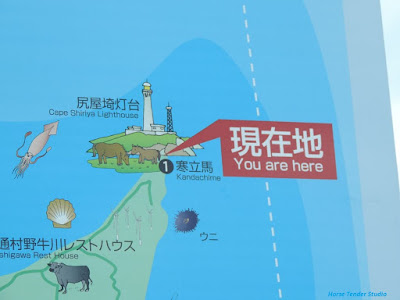 First, we headed for the beach.  It was quite a bit different from the sandy beaches we've seen closer to our new home. 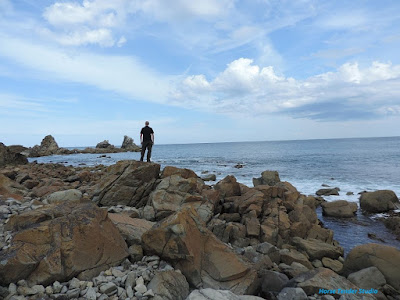 A view of the lighthouse.  There was a lot of kelp washed up on the shore here. 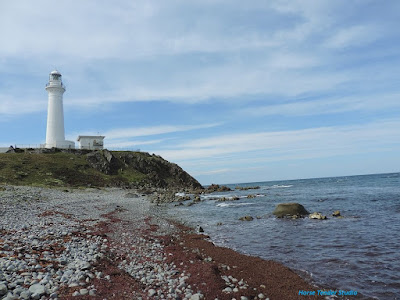 We left the shore and headed a bit inland to explore the forest.

Is it weird that I was excited to see these everywhere? 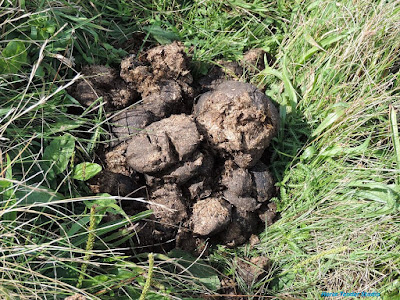 We walked around in the forest for a little while, on this beautiful, almost grown over path. 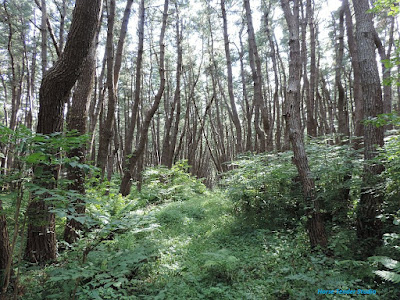 Then we got back in the car and headed further down the road.  Just around a bend we saw, horses! 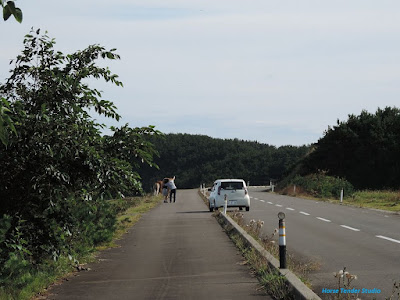 We got out of the car and started walking after the horses.  That's when we noticed this, out in the ocean; a torii gate on top of an island. 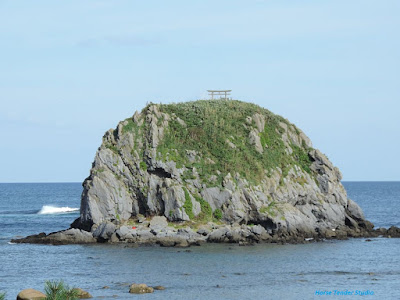 Back to the horses.  As we got closer I saw that they had a foal with them! 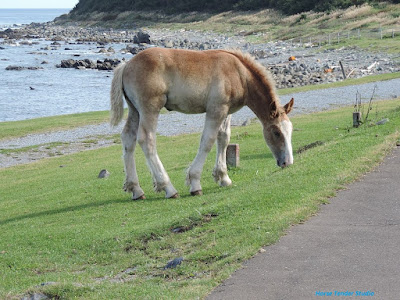 I'm not sure where I got the idea, but I thought that the horses up on the Cape would be small. 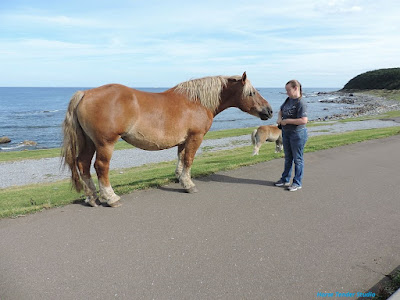 I spent quite a while with this sweet girl.  I gave her some carrots, but even after I ran out, she was content to stand and let me love on her and talk to her.  I also took a ton of pictures of her, from all angles and she just stood there.  She was such a sweetheart. 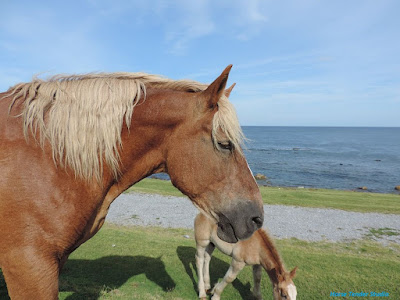 The flies were pestering her, so itchy! 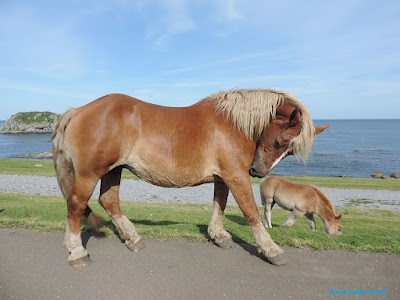 Hey, those road reflector posts are great for scratching! 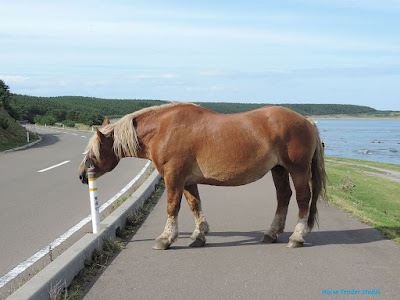 She seemed to know all about how to use them to get to some itchy spots.  I was surprised that the post didn't break off! 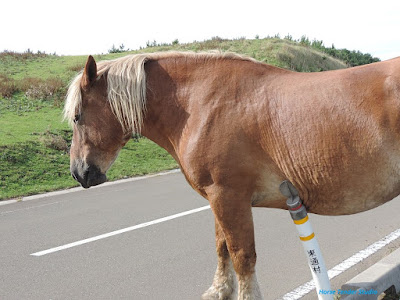 The second of the three mares was this one.  She didn't seem very interested in me.  She took a carrot, but then kept on grazing.  Look at that belly! 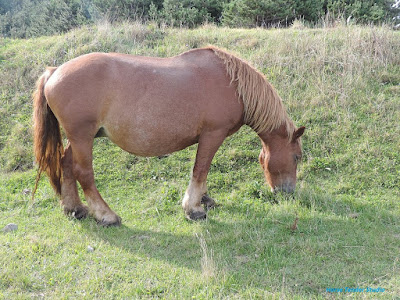 The third mare was this pretty girl. 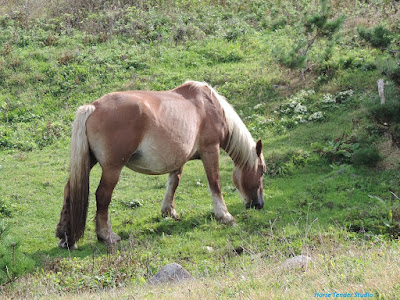 She was grazing in a beautiful spot, with a small stream flowing through. 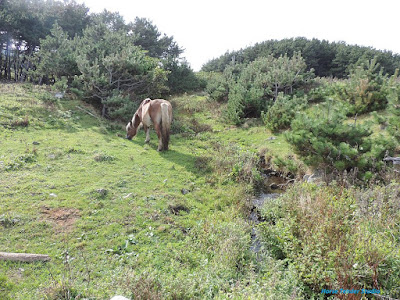 She wasn't too interested in me until she realized I had carrots.  She took a few, but then went back to grazing.  She moved closer to the shore while I sat and took a ton of pictures of her and even a peaceful video clip of her munching away with waves coming in in the background. 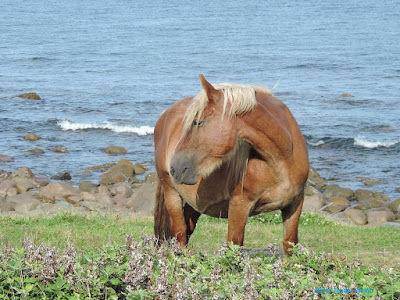 Jeff had wandered off up the beach while I was staring at horses and it was her who let me know he was coming back.  He had found treasure!  She went to see what it was. 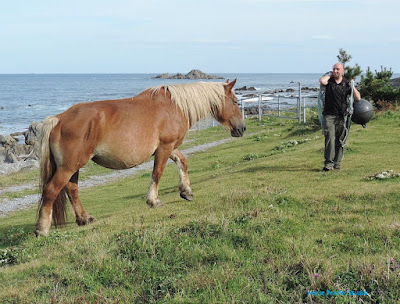 He had found two large fishing floats tied together, a plastic one, but also a big glass float in a beautiful net! 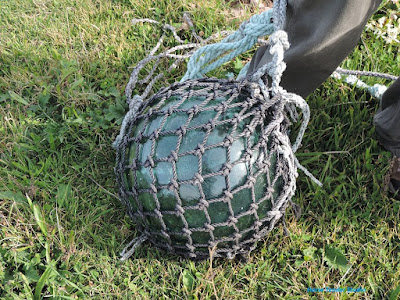 After depositing his find in the grass, he said hello to this pretty girl. 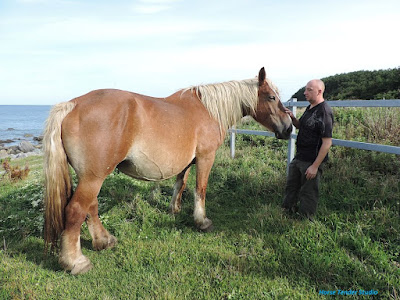 It was then we noticed the foal headed straight for us. 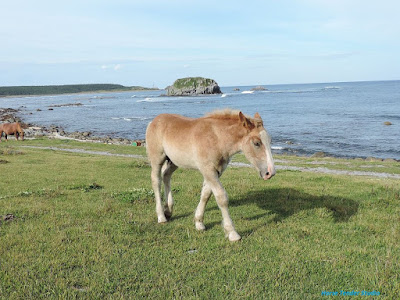 He seemed on a mission. 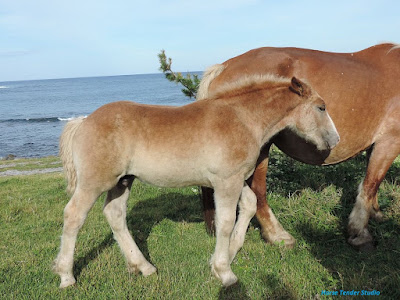 He marched right up to the mare, went under her neck, and... 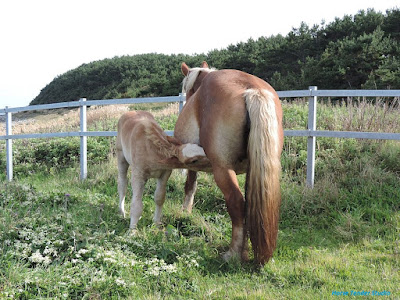 I had assumed that the first mare was his mom, since they were hanging out together for quite a while.  I actually wondered if the other two mares might be pregnant, with those huge bellies that they had, but I guess I was wrong!

Jeff picked up his beach haul and we headed back to the car. 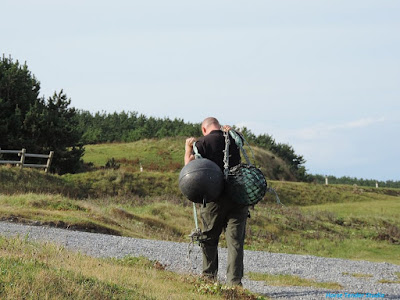 I took a few last pictures of these mares and their colt. 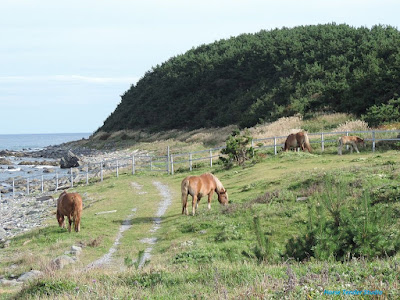 When I last saw him, he'd flopped down for a post meal nap. 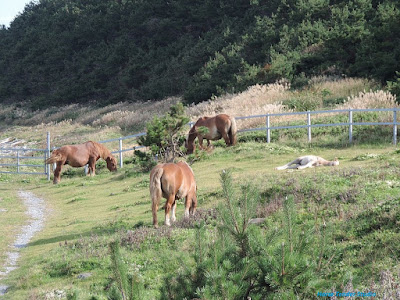 Next up will be a look at the second herd (actually the first group we saw, by the gate into the area).