This past Sunday, we made the trek down to the Zao Fox Village.  It is a place that I had been wanting to see for a long time, ever since first hearing about it a few years ago.  I wasn't sure I would ever be able to see it, since it was located in Japan.  But..  here we are!

It is about a 5 hour drive south of where we live.  Most of that journey is on the toll roads, before turning off onto a narrow road that climbs up, up, up, into the mountains. 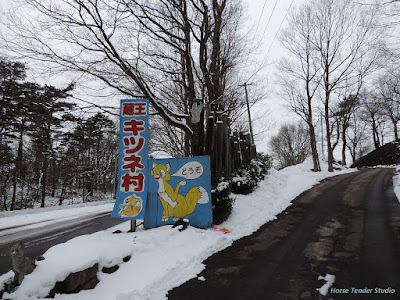 Here is the entrance into the building which houses the admission area, as well as a gift shop. 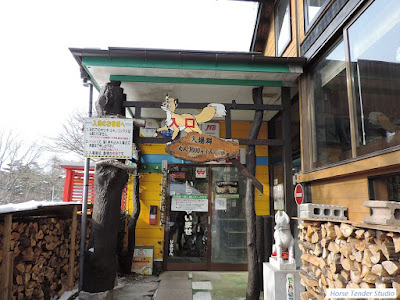 Inside, we paid our admission fee (1,000 yen or about $8.00 US), and were given a sheet of rules.  Then we walked out of the building and this is the first fox that we saw. 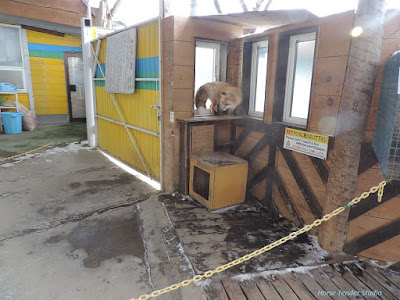 There were a few foxes in this first area, all on leashes. 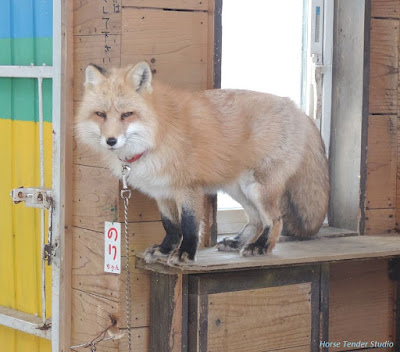 Nearby was a tarped off area with a sign stating that it was the fox holding waiting area.  The inside of the area was heated, which was nice since it was very cold that day.  We waited for a little while as others had their turn holding foxes.  It seemed that they switch foxes every couple of people.  They had different colors, marble, silver, and red, but I was happy to see that mine would be a red fox.

We learned from watching the people before us that everyone who wants to hold a fox has to put on a green jacket.  Then when it's your turn, you sit on the bench and put the blanket on your lap. 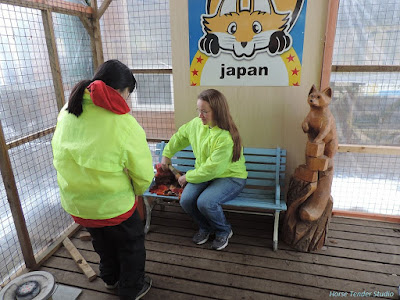 Then they hand you a fox! 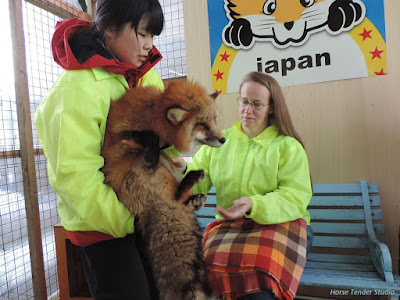 Helping get him settled in my lap.  He was very calm. 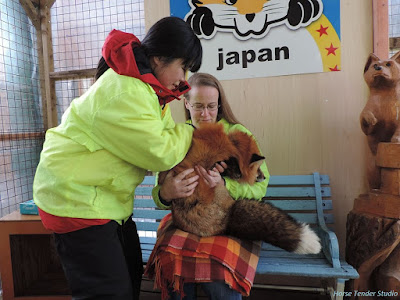 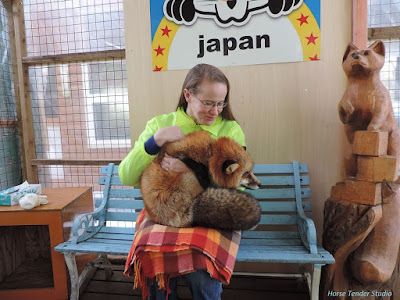 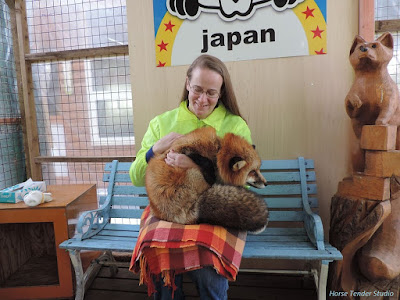 He was very soft. 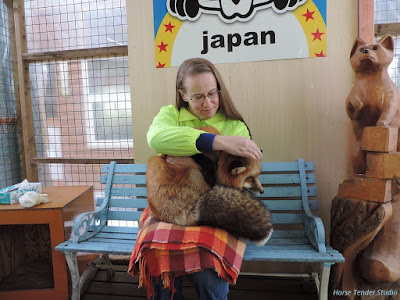 I tried to make the most of the experience, curious what his ears felt like, his tail, his leg, and paw.  At one point Jeff reached out and was petting him too.  He didn't seem concerned about all the attention. 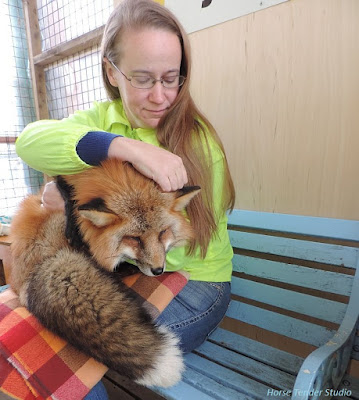 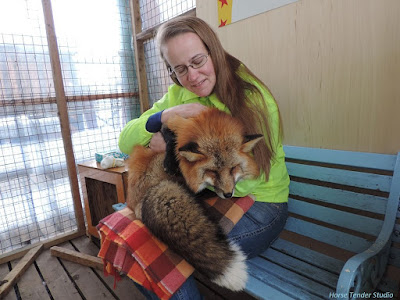 Jeff moved down in front of him and said "No, he's awake..." 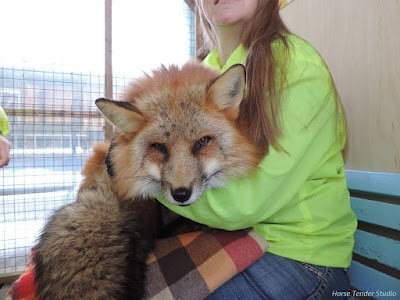 A minute later, "Now it looks like he's asleep." 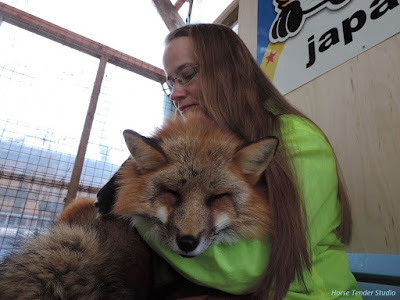 I really wanted to snuggle with him, he was SO soft, but I didn't want to make him uncomfortable.  So this was as close as I got to burying my face in his super soft fur.  ;) 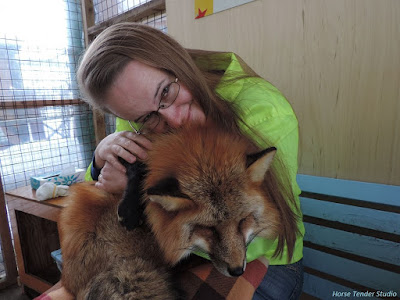 After I handed him back and thanked him, and the girl working there, for the experience, we wandered on down the path, informed by this sign that some other critters were ahead. 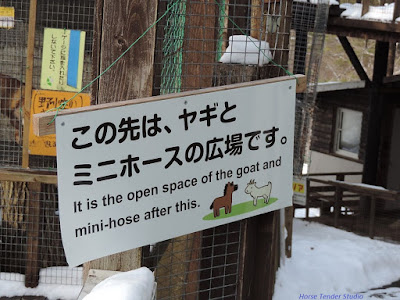 I'm not sure what a mini hose is, but if there are horses around - of any size - leave it to me to find them! 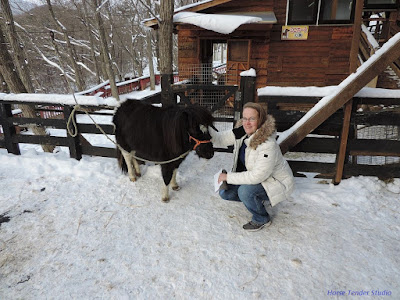 And leave it to Jeff to find a whacky warning sign. 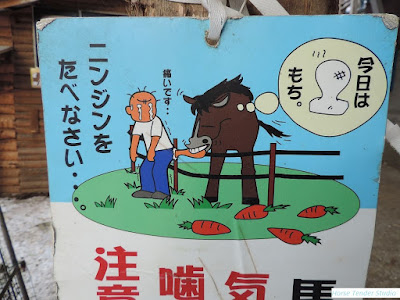 There were also some colorful signs advising you not to pet or try and hand feed the foxes. There were several foxes in cages in the first area, including this beautiful silver fox. 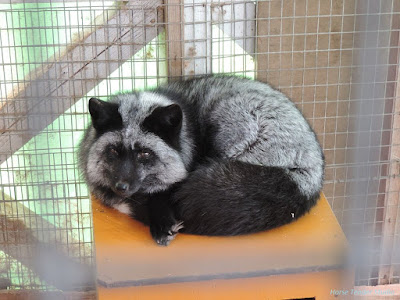 After looking at the goats, mini horses, and some of the caged foxes, we made our way into the part that everyone talks about - the open fox enclosure. 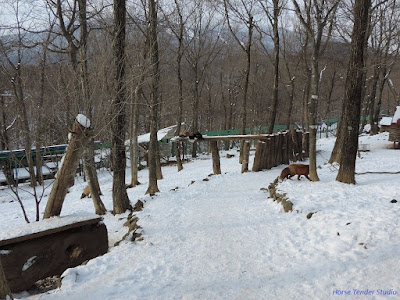 Many of the foxes were curled up sleeping. 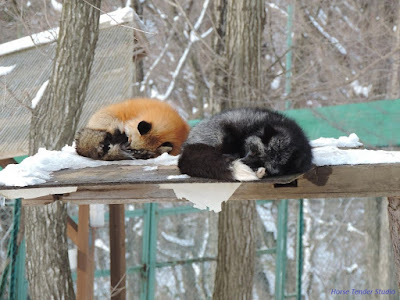 The highlight of the open enclosure is the "feeding platform".  From up there you can toss down food to the foxes.  They sell little bags of food up there for 100 yen a bag (about 80 cents USD).  Feeding the foxes is not allowed anywhere else in the park. 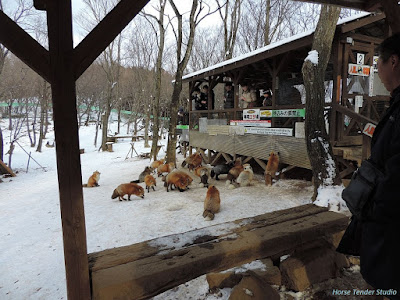 Here's a view from the platform. 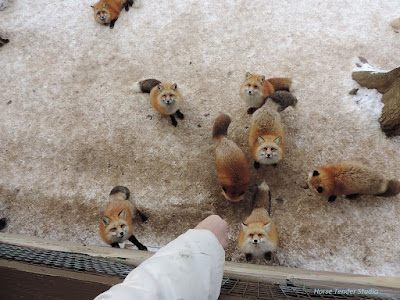 Jeff took several pictures of me feeding the foxes.  It was a really neat experience and it turns out many of them are quite skilled at catching the little bits of food. 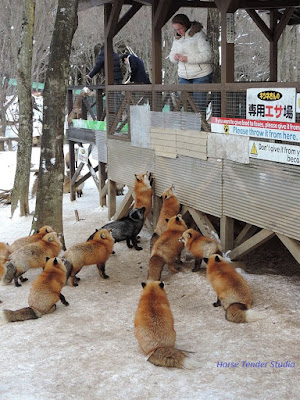 Most of the foxes were red, with a few silvers, and a couple like this.  I wonder if they are a cross between silver and red?  This particular little fox was my favorite.  She (?) was small, but seemed to be a character.  As it turned out, she was highly skilled at performing flying leaps to snatch food out of the air. 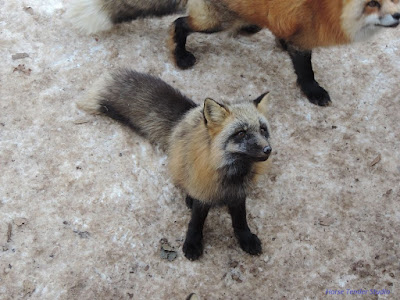 Here is a silver fox.  He (?) was actually quite a bully and kept beating up on the others.  We noticed it appeared that he only had one ear. 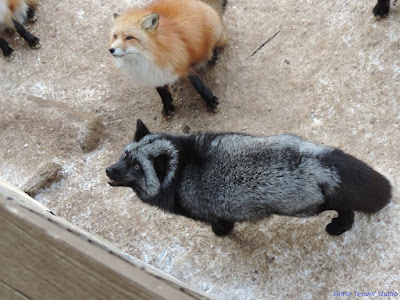 Jeff said this one looked like an orange creamsicle. 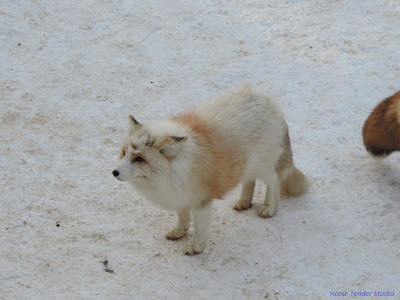 In the background of this picture you can see the film crew that was wandering around the whole time we were there.  They filmed us several times as we moved through the park and while I was holding the fox I was being filmed the whole time.  After we left the feeding platform, they approached us and asked if they could ask a few questions.  We gave a quick interview, telling where we lived, how we came down that day, what country we are from, and what we thought of the park. 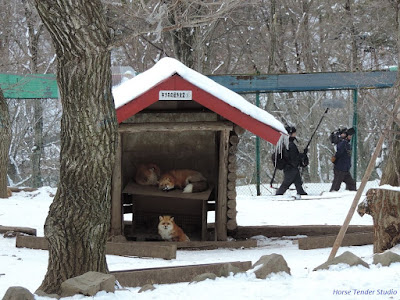 As always, I took MANY more pictures (a couple hundred altogether) plus we took several video clips.  I'd like to share them later on in a future post.

On the way out of course we had to check out the gift shop.  Much to Jeff's dismay at times, I'm quite the gift shop junkie.  I don't usually buy much, if anything, but I like to look at all of the neat and unique things for sale.  (I did end up buying a few things at this one... some baby fox postcards, some cute stickers, and an adorable tote bag)

I'm so glad that we were able to go to the Fox Village and I'm already looking forward to another trip there during our stay in Japan!