What Have I Gotten Myself Into?? And... Pie.

Being married to a military man, I always knew there was a possibility of ending up living overseas.  I also always knew that if I did find myself overseas, I wanted to make the most of it: learn the language, learn about the culture, really do all I can to fully experience life in another place.  Big thoughts for me who, despite having traveled all over the United States, had never been in another country in my teens/adult life - and NEVER over the ocean.  (I lived in Mexico as a little girl for a brief time, but that's another story for another day - or not...)

Anyway, when Jeff told me we were going to Japan, my number one request was that he get me the Rosetta Stone program.  He did, and I did a few lessons on it before we left the States, but that was it.  My intention was to return to it once we'd gotten here, but so far I haven't done much with it - yet.

Once we arrived here, I found out about a "Survival Japanese" class that is offered for free on base.  I went to several of these and learned a lot, but I still wanted more.  There are various Japanese/English conversation clubs around the area, but I felt like I was stuck between not knowing enough to have a conversation, and knowing too much for the bare bones survival classes.  So that's where I sat for a while.

I feel frustrated when I'm out and about and can't say much of anything to the local people - especially since they are all so nice!  However studying on my own just wasn't happening.  As much as I've been wanting to learn more, I find myself doing other things and not really applying myself...

Well, as of this week, I am back in college - studying Japanese!  We found out that one of the stateside colleges offering classes here (University of Maryland) has an "Elementary Japanese" class.  They also have Japanese II and actually a whole certificate in "Asian studies" that can be earned.  I'm not sure I'll do all of that, but I decided to go for the language class(es) at least.  Jeff said that while he was in Germany, he took a college course on German and it was a big help.

To make a longer story short - I'm now scared about what I've gotten myself into!  My first class was Tuesday night where I learned that, to pass, I'll need to be able to read two (of the three) Japanese writing styles AND write in one of them...  all at the end of a 7 week class.  We learned 20 of the symbols we'll need to write on Tuesday.  We will be learning the same tonight and again tomorrow, then a quiz on all of them.

Here's some of what I've been working on: writing practice and making my own flash cards.  There is a LOT more of this in my future: 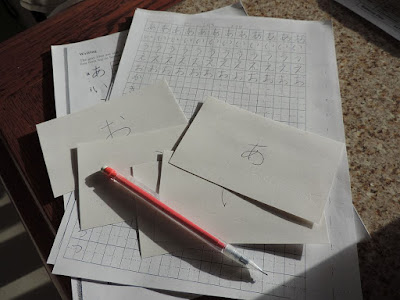 Last night, thanks to Jeff's idea, I found a really neat app for my phone to help me with all of this.  From using it last night and this morning, I've learned that my recall and writing skills need a lot more help, but I'm actually doing better at recognition than I thought.  Of course that's all for just the first 15 characters.

I really hope I can do well in this class.  I have to say that I really like the instructor, she seems wonderful.  She is very smart and funny, and I can already tell that I will be learning a lot from her - even extra things not covered in the syllabus.  She has been describing the differences between Japanese and English, not just in sounds, but in meaning, history, culture.  Even if I completely fail trying to learn SO much reading/writing/speaking in such a short time (hopefully that doesn't happen!), I think this class will be fascinating.


In other non-stressed-out-learning-a-new-language news, I made this yesterday: 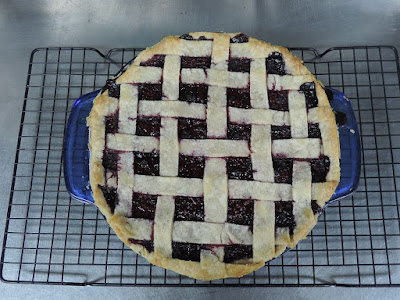 A lot of firsts there: my first ever berry pie and first solo lattice top attempt.  (Jeff and I made one together a long time ago)  The crusts were made from scratch and turned out "perfect", according to Jeff.  He's actually the real cook/baker in our relationship - I can follow recipes, he can just throw stuff together and make magic food - but he said he'd like me to make him a berry pie and I went for it.  It was two hours of prep and 45 minutes in the oven, several hours cooling.  We ate it with from scratch whipped cream and vanilla ice cream (that was from the store).  It was yummy!