Last night I received a couple of book in the mail that I had ordered, including this one: 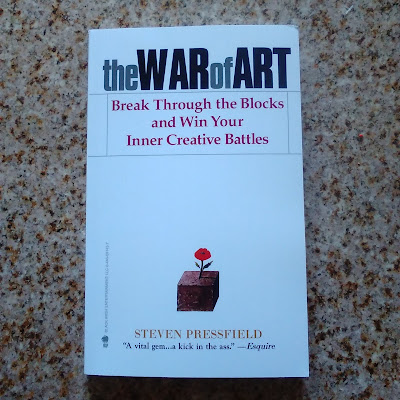 It was recommended by Khrysalis Studios on her Facebook page; it sounded very interesting and I felt it was something I needed to read.

Between last night and this morning, I've read the first section, which deals with "Resistance" - the force that keeps us from following our dreams.  I can relate to many of the ways that the author describes Resistance and how it works to block us.

I want to devour the rest of the book, particularly the next section: "Combating Resistance", but at the moment I'm inspired to tackle an "excuse" that I've been using for far too long...  That would be the ever present mess in my studio.  I get stuck in these loops where I don't want to make stuff, because the studio still isn't set up the way I want it to be, but I don't want to take the time to clean up and organize the studio because...  I want to make stuff.

There are MANY other blocks that stop me from creating things, but that one seems like an important one to handle.  It also helps that Jeff is actually out of town right now, so if I need to make an even bigger mess to get things sorted out - like, oh, say, dragging things out into the hallway over the next few days - I can.  (haha)

Anyhow, I've decided that for right now I'm going to split the difference between cleaning and creating.  I'm going to wade in there with the intention of "organizing" and clean up for a set period of time, then I get to make some stuff.  Or, if I find I am enjoying the clean up, I'll work at it for longer.  Either way, it should be a win-win.

Pardon me, while I ride off into battle...