Back in March, we took my boy Bo to Arizona where he'll be staying during our time here in Japan.  Well, we took him halfway, before our truck broke down and my friend had to come the rest of the way to get my trailer, Bo, and her three horses we had picked up for her.  The whole thing turned into a giant mess, but in the end everyone arrived in AZ safely.

I had taken a ton of pictures (it's what I do..) and I had meant to share some of them on here.  However, life got even crazier with the move fast approaching, and I was pretty depressed about saying goodbye to my boy.  So the pictures never did get shared.  I found myself looking through them today and I thought I'd share them now!

An interesting thing about where Bo ended up is that his old flame, Leah, is there too.  Once upon a time they had two foals together and Leah has always been his first love.  He had the chance to make googly eyes at her shortly after his arrival, but she was NOT interested. 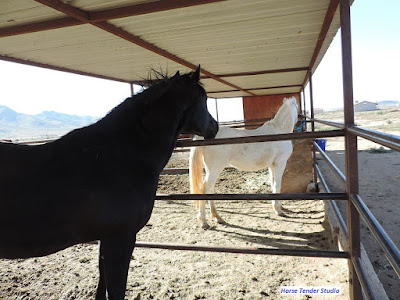 We turned him out while we shuffled horses around, and he got to check things out. 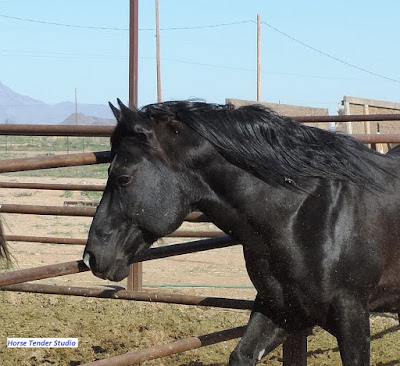 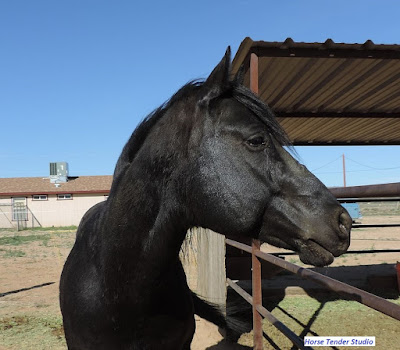 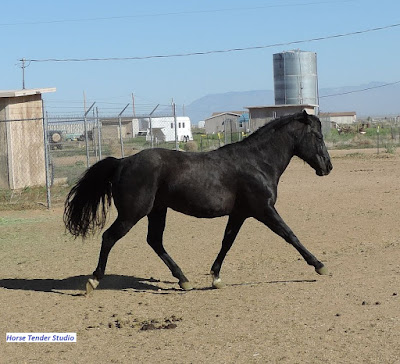 Bo says hello to Pink, Leah's filly by another stallion.  I wonder if they remember each other.  I used to turn little Pink out with Bo right after she was weaned, so that she would have some horsey company.  He's always been so kind to babies. 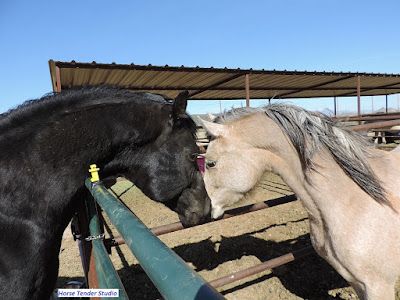 Sort of an artsy shot of Bo doing what I call his "stud prance".  Again, showing off for all of the new horses. 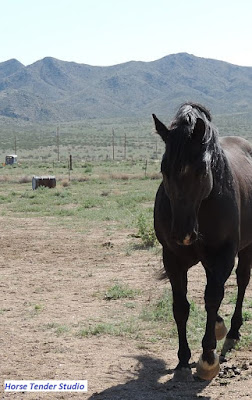 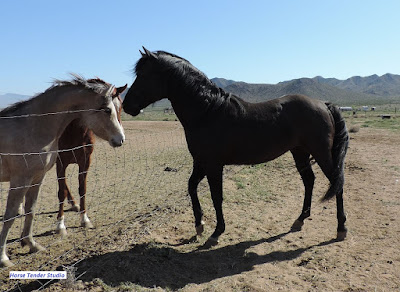 A new favorite picture of my boy. 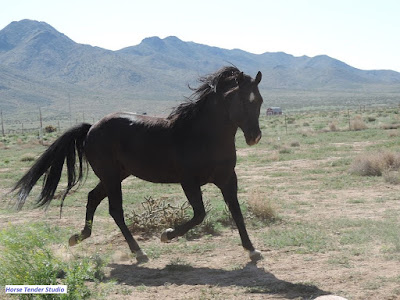 Later on, I had gone in the house for a while.  When I looked outside, this is usually what I saw: Bo staring right at the back door where I'd gone in. 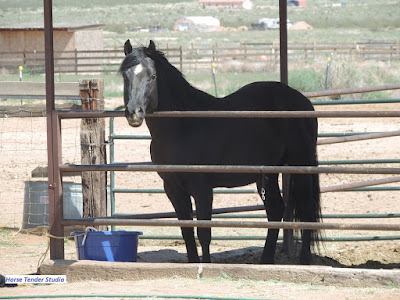 At one point during our time there, I decided to take him out for a ride in the desert.  We had done a lot of desert riding during our years in the same desert, the Mohave, only a few hours west of here.  When Bo was 2 years old, he was shipped from South Dakota, where he was born, to southern California.  We spent the next several years there.  That's where he was started under saddle and where we did a LOT of riding.  However, this was our first time out and about in the desert in around 7 years. 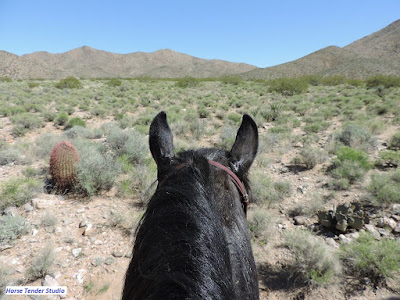 It was a beautiful day, only one cloud in the sky. 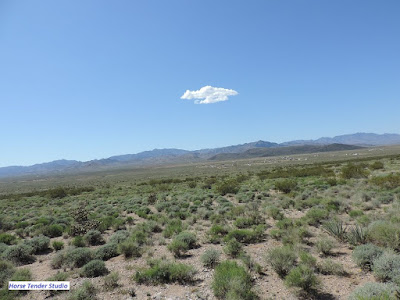 There were wildflowers everywhere along our ride.  Here the trail, really just a wash, was sprinkled with tiny yellow flowers. 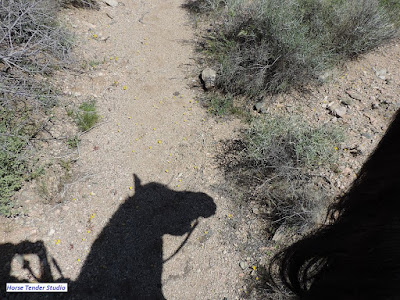 A very welcome sighting for me was the Indian Paintbrush.  This has always been my absolute favorite wildflower.  I remember my Granddad introducing them to me when I was a little girl.  He always thought they were beautiful and so do I. 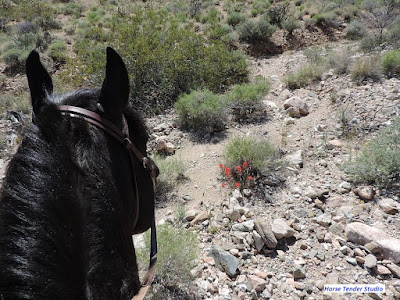 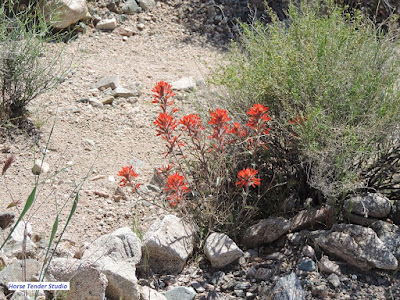 We didn't quite make it to our goal, the top of the mountain at the end of the valley.  The terrain suddenly became quite steep and we were both sweaty and getting tired; it was hotter here than South Dakota in  March!  So I stepped down at the top of our ride and we had a bit of a rest. 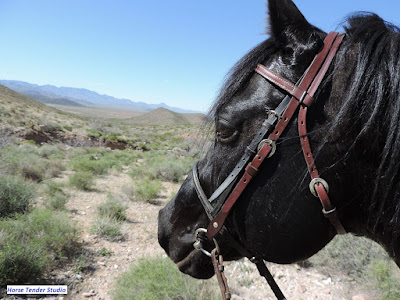 After a rest, and a good shake, we were ready to head back. 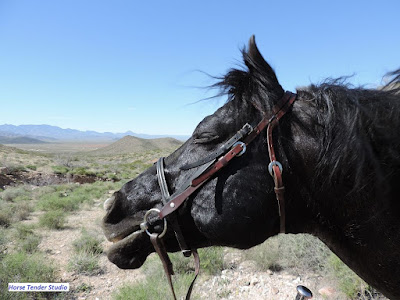 We took a slightly different path coming down the valley and once we hit the flat again, we found ourselves in a field of yellow-orange flowers.  Poppies I think? 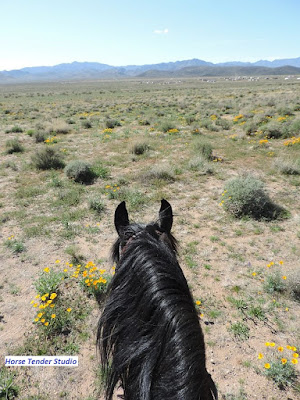 They were everywhere in this spot. 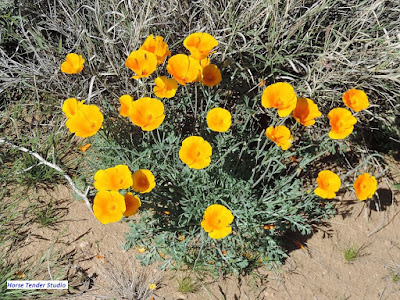 That night there was a beautiful desert sunset. 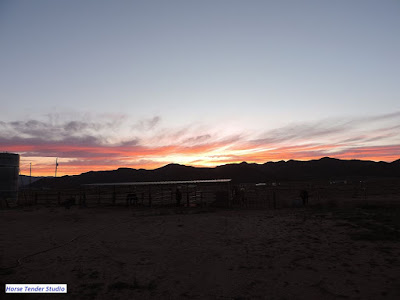 It was so pretty.  That's Bo, down at the bottom of the picture. 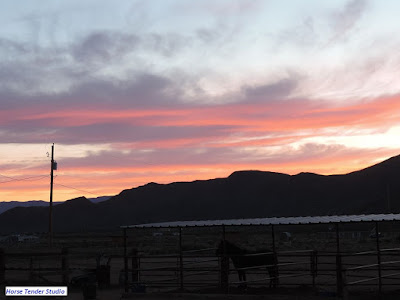 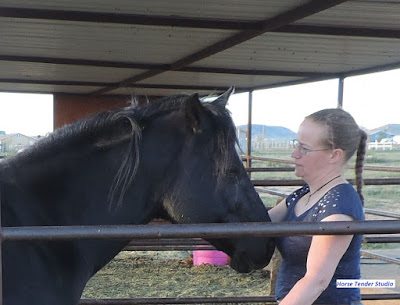 I didn't want to go, but eventually we left. 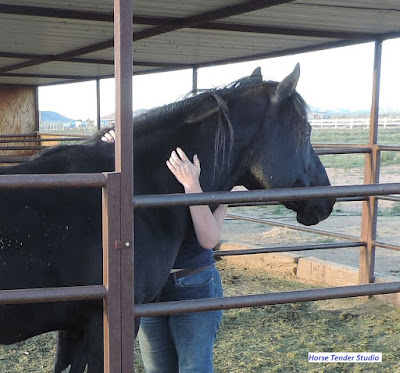 I have missed my boy terribly ever since we left Arizona and the next four years seem like far too long a wait to see him again.  I'm hoping to at least be able to visit in between now and then.  Until we see each other again, I'll picture him like this, watching and waiting for me. 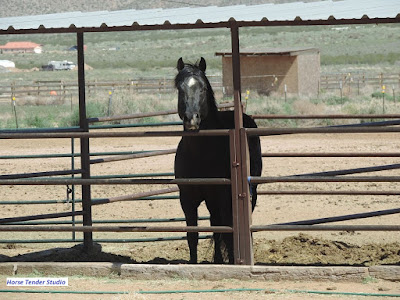