Back at the airport in Seattle, I started drawing up a new pattern for a saddle pad.  It was about 6am and we were sitting at the gate, waiting to board the plane that would take us to Japan, after having been away all the previous day and through the night.  I daresay the paper pattern I sketched out for this pad was NOT the neatest one I've ever done - ha!

I started stitching on it in early June, after I finished the "Prettiest Ever" pad.  (that one I had started stitching during our overnight at the airport)  I was able to decipher my punch drunk pattern and off I went, stitching away.

This one has probably taken me the longest out of any that I've made.  I think it might be the most intricate, as far as the number of lines, dots, color changes, and so on - which should be a good thing, but I sort of found myself losing interest in it off and on.  Ah, the creative journey can be a bumpy one, eh?

Also, more recently, I had run out of one of the colors and I was sure I had more, but..  where??

Last night, I confirmed that I did have more of the color I'd run out of - thanks to my nifty, organized floss collection - and I FINALLY finished the stripey saddle pad. 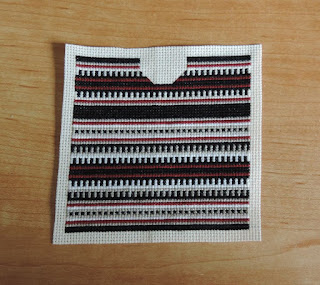