A couple of weeks ago, I made a great buy, acquiring a ton of embroidery floss and beads.


For most of last week, I was sorting and winding the floss.

They'd been given to me stuffed into a few plastic grocery bags, inside the big tote.


She'd mentioned that she had tried to sort them by color.  There were a few dividers in the bags, made up of newspaper, and plastic sheets.

What did I do first?


I couldn't help myself, I thought it'd be fun to see ALL of them, jumbled in a mix of pretty colors, before the great organization project got underway.

After making the "pile", I stuffed them all back into a bag and then had fun sorting them by color type. 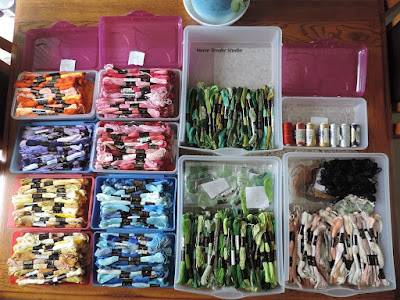 Once that was done, I counted the contents of each container.

Because I apparently love numbers (I have an Accounting degree after all), I just had to know how many skeins of floss I'd ended up with.  The woman had said in her ad that it was "300+ skeins".  "Plus", indeed.  The grand total?  935 skeins.  Making them about 3 cents each.

Next up, was to figure out exactly how I was going to make my new floss hoard useable.

I decided to further sort each color group by number and wind one of each number onto bobbins.

That brings us to this: the results from a week of floss sorting, bobbin making, and floss winding. 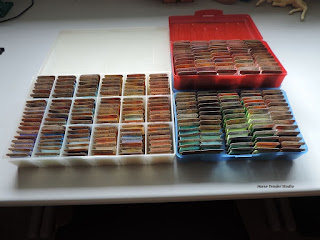 Further in the number category (more useless information?) the whole lot of 935 ended up including 250 individual colors.  Some had only one skein, but most had at least two, some as many as a dozen or more.

Next up, I'll be integrating them into my current containers.  I use a few of the bead boxes pictured to the left of the above picture.

Me thinks I'll have to order at least a few more of these bead boxes... Sadly, they aren't available here.  At least not the same ones and I'd like to keep them all matching.

Next up will be going through the beads.  However this week I've been busy getting ready for the next vendor show here, which is this coming Saturday!!

Posted by Horse Tender at 4:00 AM No comments:

I just couldn't wait to share this, though, alas, no pictures yet.

Tonight we had a couple of friends, Holly and John, over.  Right after they got here, Holly told me that someone on the local "Yard Sale" Facebook page was selling a bunch of beads.  I was somewhat interested, then she added that they were also selling a bunch of embroidery floss.  THAT got my attention.  Yes, yes, though I already have a lot of it, I'm always on the lookout for more.  I contacted the seller, the beads and floss were still available.  So Holly and I left Jeff and John to visit while we set out on a quick little expedition into town (we also stopped and picked up chips and dip and ice cream for the night).

I am SO excited with what I ended up buying!  The woman handed me a big, heavy tote bag, crammed full of other bags, containers, etc.  When we got back to the house, I did a quick investigation of most of the contents.  She'd said there were over 300 skeins of floss and I don't doubt it.  We're talking bags and bags of the stuff.  I really, reeeally wanted to start sorting it all, but didn't want to cover the kitchen table in the middle of our little get together this evening.  Tomorrow I think I'll dig into it all.  (yay!)

The beads are nice too; there are all sorts of sizes and shapes, also a lot of beading wire and string, some tools, jewelry findings, etc, etc!

I plan to share some pictures soon.  Maybe tomorrow.  ;)  I usually try not to do picture-less posts, but I couldn't wait to share!  :D
Posted by Horse Tender at 7:33 AM 1 comment:

"C'mon over!" I told a friend yesterday, "I'll be here, just crafting and staring at Max."


Such is how I've been spending my days the past week.  "Max Watch" hasn't been as intense as it was the first couple of days; we've settled into a routine and I'm (fairly) confident that he won't expire on my watch... 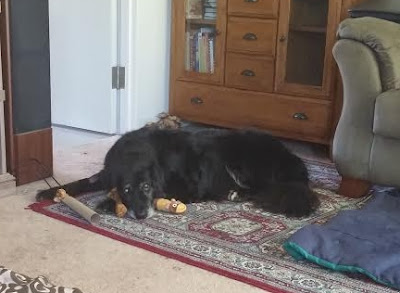 I've been trying to make the most of spending my days on the couch, with one eye on him.  Been watching a lot of Netflix and YouTube videos.  I've also been cross-stitching - a TON.

I finished another saddle pad. 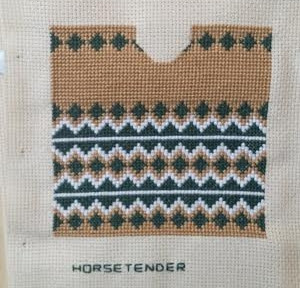 And in typical fashion, immediately loaded my frame to start on the next one.  This will be the same as the one above, with the green and tan colors reversed. 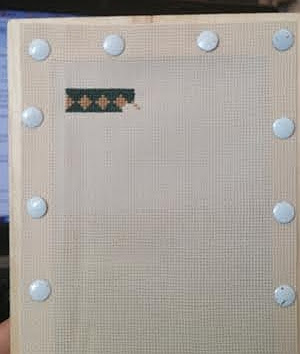 I've also been working away on what will be my first Arabian costume, featuring cross-stitched panels.  I embarked on this particular project a couple of months ago.  Each panel has taken a ridiculous amount of hours to complete!

Here's how everything looked at the start of the weekend: 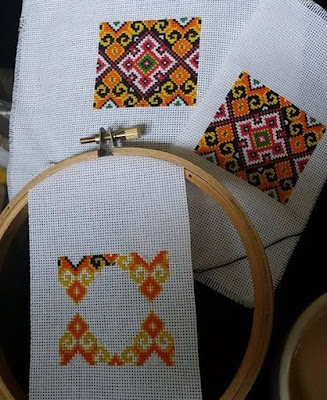 I finished the third panel... 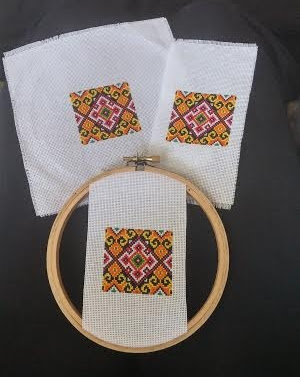 Then had to reload the first piece into the hoop and expand it for the rear panel of the costume - the part that will lay behind the saddle.

Here's how that piece looks today. 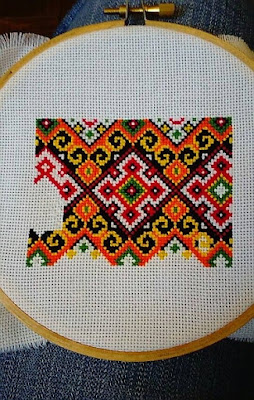 Hopefully this whole thing will be pretty cool when it's done!

Last week I was getting a lot done.

I was continuing work on, and trying to wrap up, the Great Studio Overhaul. 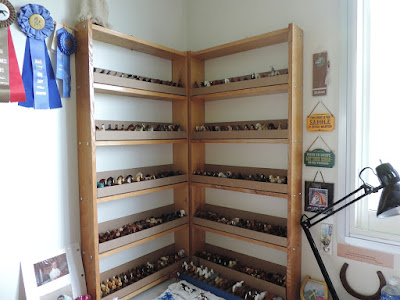 I was working on several mini tack projects. 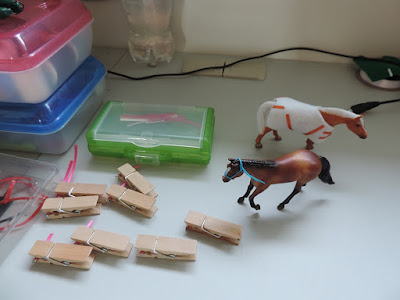 I was also finally unpacking resins and thinking I wanted to start doing a bit of prep work on the raw copies.  (Sort of a big deal, since prepping is typically my least favorite task.  I like to jump on it when, for whatever reason, I actually want to do it.) 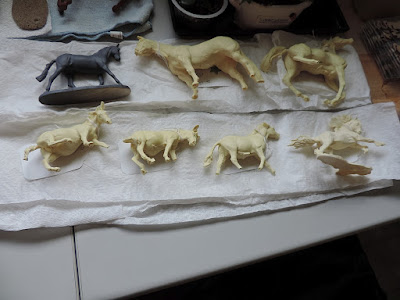 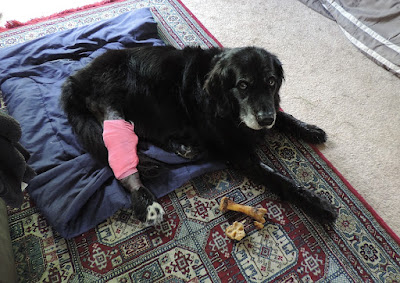 We left for a camping trip over 4th of July weekend, but before we got there, Jeff and Max were involved in an accident.  That's the best way I can put it.  Afterwards, we both just knew Max was dying, but amazingly he came out of the whole thing with "only" a broken leg.  Still a problem, given that he is 12 years old and a large dog (Newfoundland mix) who was already starting to have some trouble getting around...

We had rushed him to a local Japanese vet that was highly recommended by other people stationed here.  He was left there for the night.  It was a night we spent trying to decide: surgery or euthanasia.   Jeff and I both called friends and family members that night and the next morning, needing to talk about what happened and what we should do.  Jeff's dad told us we should do whatever we think Max would want.  Jeff said that would be to spend as much time with Jeff as he can.  They've been together since Max was a little puppy.  My friend who is watching Bo back in the States had me in tears when she said this about Max, "I know he's old, but... He's not done yet.  He proved that by trying to go with you when you left him at the vet."

I had told her about that.  He did.  After we saw the x-ray and said goodbye to him (for the night) he tried to scramble up off the exam table and come with us as we left the room, floppy back leg and all. 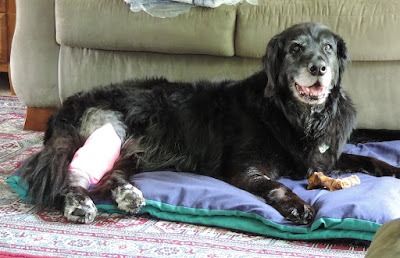 He continues to amaze us.

As for Jeff and I, we are both okay, though possibly dealing with a bit of post traumatic-like symptoms - Jeff from being in it and me from seeing it happen.  Jeff came out of the whole thing with a nasty limp over the first couple of days, but, typical man (?), wouldn't go to the hospital.  I don't have much room to talk, I've been historically horrible and going to get myself checked out after bad stuff happens.  Thankfully he's almost back to normal already.  For me, I'm finding out that I might not be cut out to be a nurse.  Jeff had to go back to work the morning after we brought Max home, post-surgery.  I've spent the last couple of days watching Max like a hawk, trying to do everything I can possibly think of to keep him comfortable whenever he gets antsy or whines.  I've also been living in an almost constant state of stress and worry.  I know neither of those things do any good, but they've been my constant companions.  As a result, my nerves are shot.  This has certainly given me a new appreciation of what caregivers must go through.  Jeff tells me I need to relax, Max is not going to keel over, he's already been through the worst and survived.  He is a tough old man.