This is "old news" to some of my readers, but it's the first time I've felt up to blogging about it and I thought a follow-up to my previous triumphant, light-hearted post was warranted, before moving on.

About a month ago, I attempted a sweep of the performance division of a (fun) show with a Smoky.  The show was being held on Facebook.

Sometime after entering, I made the decision to deactive my Facebook.  I've talked here before about my struggles with depression.  Add on anxiety and an official diagnosis of ADHD, plus well... just, 2020, and I was in bad shape.  I needed a break from the "doom scrolling" and I was also feeling battered after breaking my silence about current events over the summer; then dealing with the fallout that came with using my voice for the first time, after reading so many others' opinions over the years.  I think that about covers the "why".

So, I shut down my Facebook.  It's still there, just on hold, hidden I think.  Unknowingly, when I did this, all of the Smoky pictures, and my other entries, vanished from the show - just before judging took place.  After all of that, I wasn't in the show.  I took the news..  really hard.  Embarrassingly hard.  It wasn't "just" a photo show or a fun hobby thing for me, it was so, so much more.

I wanted, needed, to be a part of something light-hearted and fun.  Sure, it was fun taking the pictures - but then to be "shut out" of the show, accidently, by my own decision in trying to do a good thing for my mental health, was... hard.  It was also, as I felt, probably my only legitimate chance to show Smoky in an entire performance division and not have it be a gag or a pile of throwaway entries.  It was a chance to show performance and not have the stress of trying to do everything perfectly or deal with a lack of proper equipment, set ups, props, and so on.

I really had gotten "in the zone".  I was speed building tack (namely western and english bridles for him) and coming up with crazy, fun ideas - as fast as I could finish the previous one.  I innovated, a great deal.  I'd get an idea: "Ohhh, that would be awesome!...  But how can I do it?"  and then I'd do it.  the clothesline, the out of focus romping (fleeing) dog in the foreground, those were just a couple of ideas I had no idea if I could do, until I did them.

Then, it felt like it was for nothing.  Not nothing, I have the pictures, I'd had fun, I'd learned things.  Those are what the rational brain says.  Irrationally (?), I was crushed.  I also beat myself up mercilessly for being so upset.  This whole situation is SO the definition of a "first world problem", of "privilege", yes, I knew that.  Still I felt broken, and felt broken for feeling broken, and so the spiral went.

Next up on the big photo show radar was The Field of Dolls Photo Show.  I had joined the FB group,  downloaded the show packet and class list, and had my eye on plans for it.  Then, when things went "bad", I didn't want to make any plans.  I was just done.  It's been quietly in the back of my mind all month but I still wasn't feeling up to even trying.

A few days ago, on a Skype call with my friend Anne, she mentioned that entries were due in a couple of days.  I, half jokingly, said maybe I'd try to throw something together.  In that same chat, she and I both marveled over Troubadour, the newest addition to my herd and, in her words, "a total dream horse".

Yesterday was the day, as Anne reported to me (being that I'm still off FB and out of the loop), entries would be accepted until the password was changed this morning.  I had other things loosely planned for the day, but I decided to "to see what I could come up with" intending to..  um, maybe "half ass" a few pictures and see how I felt.  At first I was not feeling it, but I kept going.

This led to a near full day of playing with supplies, tack, props, dolls, and speed building two more bridles - english and western - this time for the stunningly beautiful Troubadour.  A "real" performance horse, not my all time sentimental favorite who is "not" a performance horse.  It doesn't feel like an over exaggeration to say that yesterday was a battle.  I cried, more than once, and raged against an inner voice saying things like "why bother, you're wasting your time, this isn't going to go well either" and other lies that we sometimes tell ourselves.  I said okay, whatever - yeah, sometimes I almost believed it - but I kept going.

I tried to improvise with what I had and come up with stories.  It feels like a bit of a bad idea to share them all here now, so maybe in a future post.  For now, here's one picture that I took when testing out tack and setups.  Then I stopped, looked at this, and smiled. 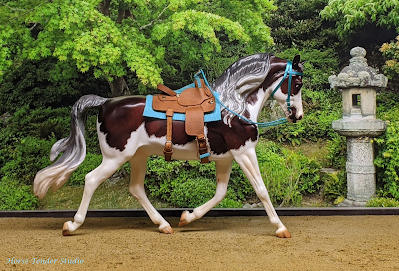 Oh, and the Smoky pics?  Well...  I came up with justifications to put one of them in each scene class in the "fun" division.

I don't want want to jinx anything, but... I think I'll be okay.