I Rode (Another) Horse!

Hopefully this will soon no longer be a monumental event to write about and I'll be riding far more often than once every 6 months or so...

Yesterday I finally made it to the riding club - or one of the riding clubs anyhow.  Last month, when Jeff and I had gone to the Yabusame display, I had met a woman named Angie, also here from the U.S., who rides at the club.

I saw her again at the Yabusame competition this past weekend (more on that later) and we had made plans to go to the club together yesterday.  So in morning I drove over to the neighboring city of Towada to meet her and we went to the barn!

The first horse I met was Suzaku, a gorgeous mealy bay. 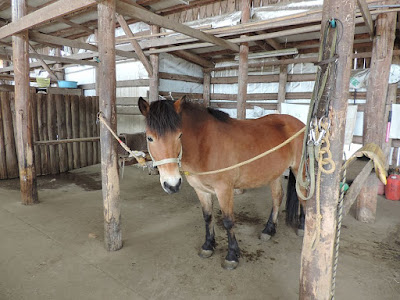 She is Angie's usual mount. 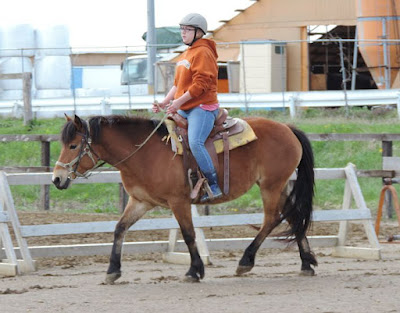 I love her coloring - so pretty! 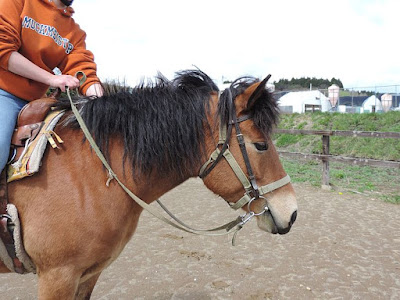 It turned out there was another American lady with us who was getting a riding lesson from Ayuko-san (I think Ayuko-san is the President of the club).  She was on a little palomino gelding named Tobey. 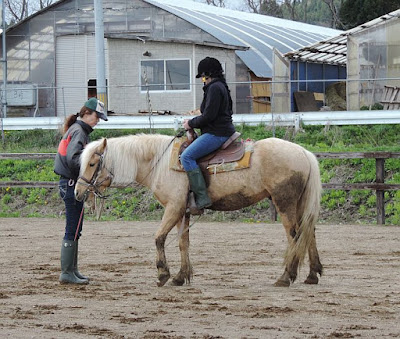 Angie ended up helping with the lesson, in part due to the language barrier.  She was trying to help explain posting to the trot.  Angie asked Ayuko-san if I could ride Suzaku while she helped from the ground.  The answer was yes!


I rode around the arena for a little while and actually ended up helping with the riding lesson too, serving as a "pace horse" for Tobey as we did laps around the arena.  By himself, Tobey ended up going too fast with his beginner rider, but with Suzaku in the lead, his rider was able to work on her riding and not just hanging on.  ;)  The riding lesson was a group effort in the end!

All smiles on Suzaku.  I don't think I could stop smiling.  Interesting note: The helmet is mine, I had brought it from the States (just in case) and had taken it with me yesterday...  just in case.  :D


Suzaku was fun to ride, she actually reminded me a LOT of my boy, Bo.  She was a real sweetheart, but seemed to have a bit of a dull streak.  I had to push her to keep her going.  She did listen though and was fun.  We just walked and trotted.  It felt really weird to be in a western saddle again, I had pretty much quit riding mine a couple of years ago.  Another "just in case" that I brought from the States is my dressage saddle.  I might be able to use it to ride in sometime.  That would be interesting.

I talked with Ayuko-san during and after the ride.  She was very nice.  I told her about Bo and showed her pictures of him on my phone.  She thought he was beautiful and said she really wants a black horse.  She was surprised to see the picture of me doing horse archery.  She asked if I would like to learn traditional Japanese horse archery (Yabusame).  I told her, "Yes, very much!"  Then she said... "I will teach you traditional Japanese horse archery."  (!!!!)  :D  I am so excited!

Angie goes to the club every Saturday.  I have my Bonsai classes every other Saturday, so I think the next time I'll go is in two weeks.  That seems like a long time, but it's certainly better than another 6 months between rides.  I'd like to go with Angie again at least once more to make sure I know how everything works, then I might be brave and start going on my own!

Tomorrow morning I'm off to meet with someone in a neighboring city who is going to take me to a horseback riding club!  I'm going to see where it is, check out the barn, the horses, and be introduced to the people there.
I've recently learned that there are TWO riding clubs in that city.  This club that I will get to see tomorrow is the Yabusame (horse archery) club.  That is their main focus.  The other club focuses on jumping and dressage; it was them that let me ride a horse on that magical day last October.  As of this past weekend, I have contact information for them too and know where they are located.  I'm hoping to get to go meet them (again?) soon.  But first, the horse archery horses - and people! 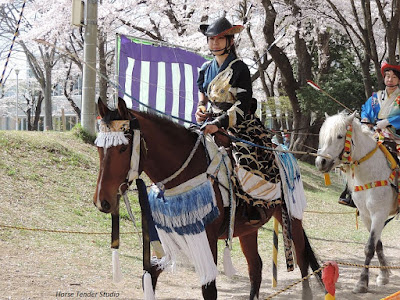 Then on Monday morning, I'll be going back up to see the wild horses at the lighthouse.  Recently I met a woman who is new here.  She is a fellow horse person and a photographer.  She's already hit the ground running and after just a month here has done a lot of traveling and taken a lot of pictures!  (I can relate)  She hadn't been to the lighthouse yet and was very excited to go when I offered to go with her up there.

So, out of the next three days, plans are for two of them to be full of horses.  I most certainly approve!!
Posted by Horse Tender at 7:55 AM No comments:

Somehow it has been a month since my last post.  Sorry about that.  I could come up with some excuses as to why I went from (mostly) daily posts to nothing, but really what it boils down to is depression.  This is a bad time of year for me, for several reasons.  It's a complicated thing, because...  I absolutely love spring; it is my favorite time of year.  To top that off, I'm finding that springtime in Japan is breathtaking.  It's hard to be depressed for long when you are surrounded by sights like this: 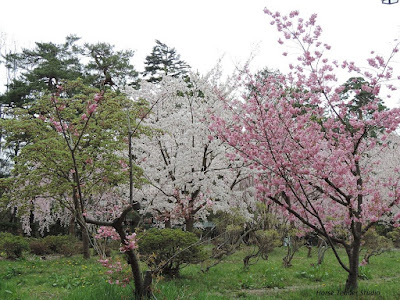 Stay tuned as I return to regular blogging, starting with this post.

I have been quietly working on several things in the studio.  In addition, Jeff and I have been doing a fair bit of traveling and I have been taking a LOT of pictures.  Horses!  Mounted Archery!  Cherry Blossoms!  I should have plenty to share.

Posted by Horse Tender at 8:43 AM No comments: