When I went to BreyerWest in March, I bought...  a lot of horses.  (more on all of them later)  The last three of them arrived yesterday.  I bought three Traditionals at one of the room sales, but asked if they could be shipped to me after I got home.  Space in the suitcases was at a premium!

Please excuse the messy desk picture, I still don't have a dedicated photo area and let's be honest, maybe I never will.  I didn't want that excuse to stop me from doing a post today. 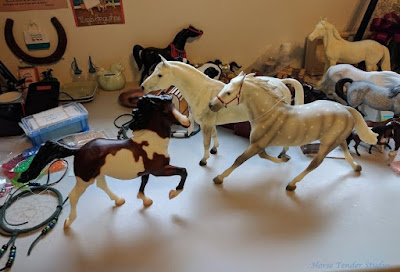 Posted by Horse Tender at 5:14 PM No comments:

Yesterday I began the daunting process of verifying just who all is qualified from my photo show string to go to the MEPSA Championship Show next month.  Last year I'd started showing with MEPSA just in time to go to the last Mini qualifier.  I had a few horses earn their way to the BIG show right away, but...  I didn't send them.  I reasoned that it wouldn't be "worth it" to send just a few pictures.  And then I kicked myself for months afterwards.  I swore that next time I would send whoever I had qualified.  I also swore that I would enter every single Mini Specialty qualifier for the next show year, and possibly a couple of others.

I'm proud to say that I did it!  As this show year comes to a close, I can report that I successfully entered all four Mini Specialties AND the Vintage Specialty as well.  There were a few others I'd hoped to enter, but it didn't happen.  No matter, I stuck to my original goal and followed through - which is sort of a big deal.  I'm all about making plans, but, uh...  yeah.

I started pouring over the spreadsheets of qualifiers and comparing them with my own results.  I decided that the best way, for me, to do this was...  low tech.

Bring on the scraps of note paper! 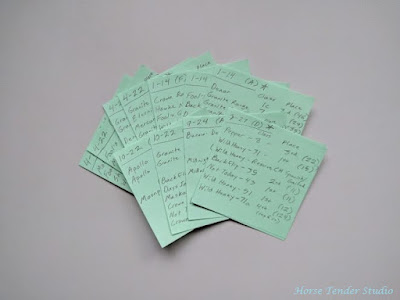 I scribbled down every qualified horse, the class they were in, placing, and how many were in it.  In MEPSA 1st-3rd gets a qualification, but if there are over 100 entries in a class, it's 1st-6th.

Wow, I have quite a few from my meager string that made it in.

This is one of my "sleepers" an ordinary horse that I had no grand ambitions for.  He went to the beach, got a few pictures taken, and off he went to the shows. 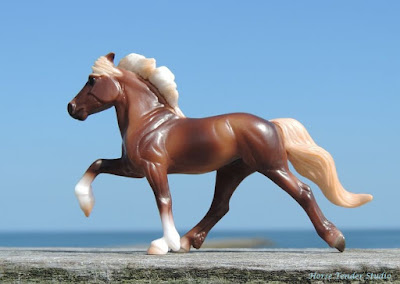 I named him Granite Range, he shows as an Icelandic stallion.  I can't even say where his name came from.  I decided I wanted to show him, he had to have a name, that's what he ended up with.  I wish he had some cool, meaningful story, but..  nope.  Isn't that the way it goes sometimes?

In three shows (he wasn't sent to the first one) he's been Champion Gender once and Reserve Champion Other Breeds twice.  He's qualified at every show, double and triple or more.

It amuses me that I have him only because I saw him in one of those mystery foals sets a couple of years ago and thought, "Huh, I don't have that mold yet."

Another sleeper is Backflip.  Oh, Backflip...  He's been mentioned in my blog before.  Some have heard his story, I'll quickly tell it again.  He is one of my old customs and he has never been a favorite, just something...  I don't know.  Despite that, in true pony style I suppose, he insists on doing well at the shows.  He's qualified in every Mini Specialty, in Pony stallion and/or British Pony class.

I just shake my head. 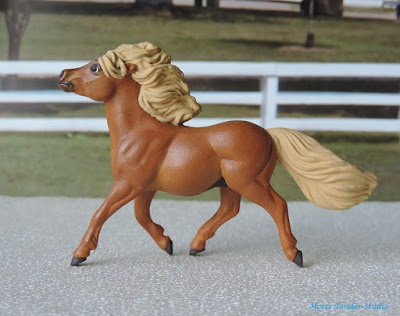 The last sleeper, of sorts, is Not Today.  She is named from Game of Thrones: "What do we say to the God of Death?  'Not today.'"  I like giving these sassy little ASBs equally sassy names.  She is another older work, though not as old as backflip.  I've always thought she was pretty, but not particularly a favorite.  She has qualified in the Black color class at every Mini Specialty for the show year. 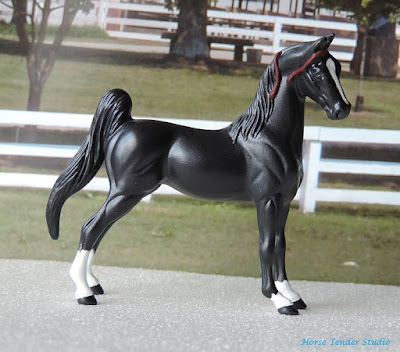 Those three will be joining other obvious favorites, like Wild Honey, and all of the other qualifiers in a "trailer" over to The Show very soon.  Just as soon as I make sure I know how to properly enter the thing and get all of my ducks (pictures) in a row.

I'm also looking ahead to the next show year, which starts in August.  I'm hoping to increase (double) the size of my show string.  Also, I'd like to branch out from the Mini Specialties and try to enter some of the regular shows and other specialties.

The biggest news for this post is that two (raw) copies of Sarah Rose's Mini Khemosabi resin landed here today!  They weathered the trip to Japan very nicely and are out stretching their legs in the studio. 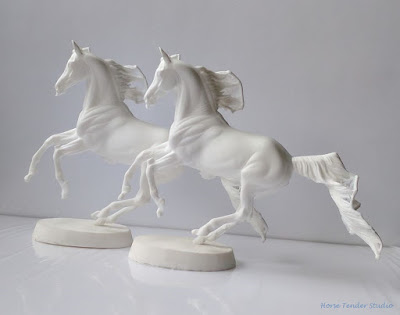 I've long admired her work and I'm so happy to finally have a couple of small pieces of it.  I think it is so cool that she has been making small versions of her highly popular Traditional scale resin horses.

That was one task I accomplished today: 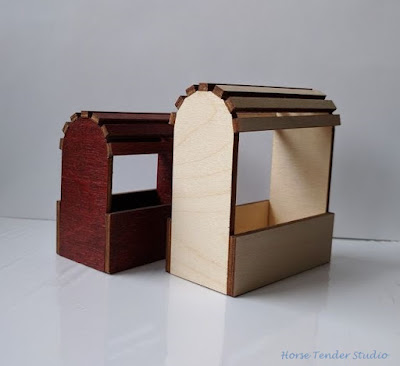 During my visit to my friend Jennifer last month, I discovered that my saddle stand design is a bit too small (mostly too short) for Western saddles (oops!)  Of course, I might know this if I ever finished my Rio Rondo saddle kit that I started...  years ago.  I did use what I have of it (lower skirt, fenders, and stirrups) to help decide just how much I needed to embiggen the design. 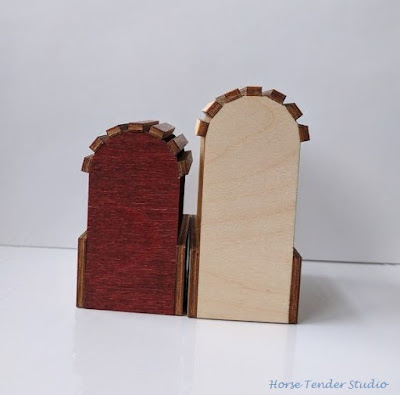 A bit of time in the software, a prepped board fed to the laser, some wood glue, and clamping later, I had a prototype for saddle stand version two - or what will be the Western saddle stand.  It is roughly 3/4" taller and almost 1/2" longer than the original version. 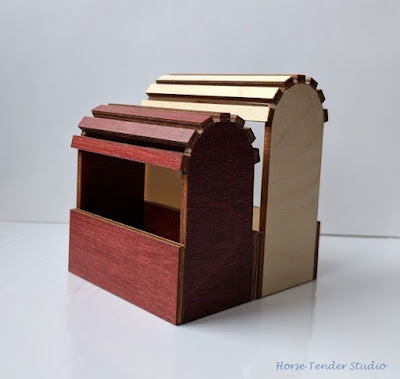 I had a request today for a saddle stand in a custom color scheme that I think will be very fun to make!

Also, I will be moving plans to experiment with the laser and leather (cutting out saddle pieces, anyone??) to the short term list.

Also, also...  Jeff declared today that he will be ordering a 3-D printer.  (eee!)  That's been on his list for some time now.  He had one on order during a Black Friday sale last year, but they oversold them and refunded his order.  He was quite sad, but it appears they are back in stock. 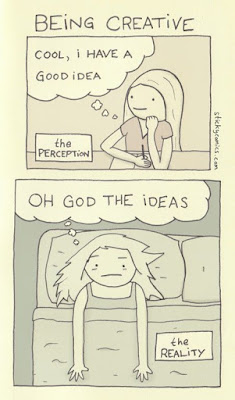 Posted by Horse Tender at 3:00 AM No comments:

Wow, so I really fell into a blogging slump.  I had hoped to post about the Epic Trip (as I have been referring to my 6 week adventure around the U.S.) as it was happening, but:

1) I highly underestimated how much the trip was going to take out of me, physically, mentally, and even emotionally.  I carried my laptop the whole way, but only took it out of my battered backpack a few times.

2) At several stops along the way there was no Internet, which meant no laptop connection, and blogging from my phone is not such a great thing.  I took a lot of pictures along the way and I'm hoping to do a series of posts about the trip - well after the fact now, but I'd still like to share.  I think I'm finally recovered from the jet lag - and the horrible cough that I brought back as a souvenir - so I'm ready to "get back on the (blog) horse".

With that in mind, here is a small edition of Motivation Monday to kick things off.  As always, I hope everyone has a great week.  Look for my first trip post tomorrow, or even later on today if I get froggy.  *wink* 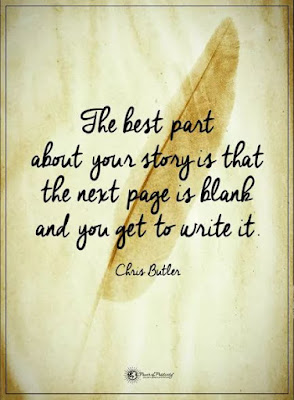 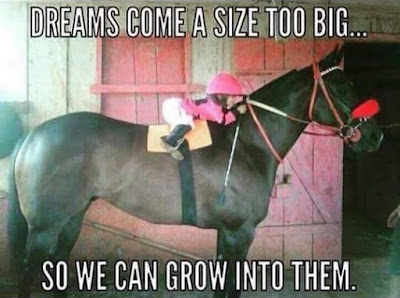 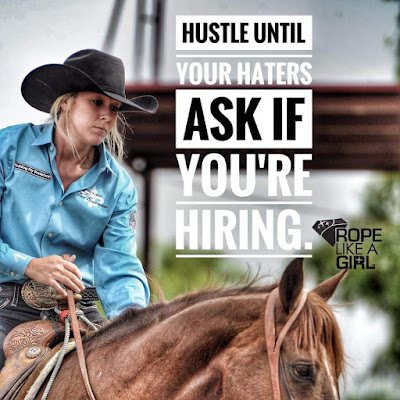 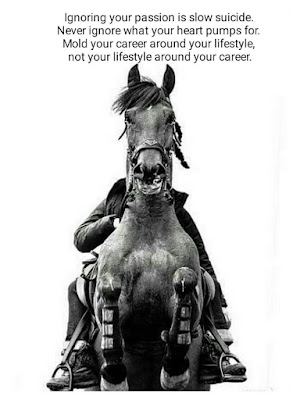 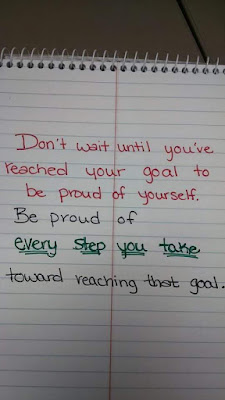 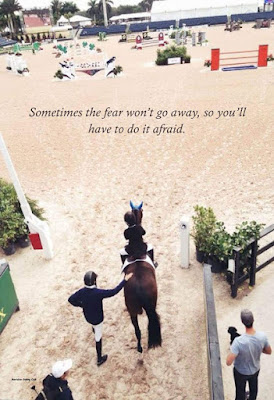 Posted by Horse Tender at 3:00 AM No comments: