BreyerWest - I'll be there!

I've been cooking up this announcement for a little while.


The original plan was a trip to the U.S. to visit family and friends (and Bo!!) in April.  Jeff mentioned that I might want to go a week earlier to have more time to visit.

I had already looked at the NAMHSA Live Show schedule, ya know, just to see if there might be any shows in any places I might be, in the time frame I might be there.  Much like I did when I ended up visiting Arkansas and discovering there was a live show (Mid-Ark) right there, right when I'd be there.  (yay!!)

The stars didn't seem like they would align this time.  However, I did see that BreyerWest was in Oregon, in late March.  Well, I'd be flying into Seattle, from Japan.  Hmmm.. close, but not enough.  Ah well.

Then came the idea of leaving earlier for the trip.  Hmmm..  How about if I leave a bit earlier still and...  maybe, you know... go to BreyerWest...?

I've spent the last few weeks juggling dates, hotels, planes, trains, and automobiles (no, really) and as of last night, the last puzzle piece is in place and, it's official.

Side note: I'll have some goodies to peruse in the room sales and Friday night Swap meet at the host hotel, here's one of the things I'm working on: 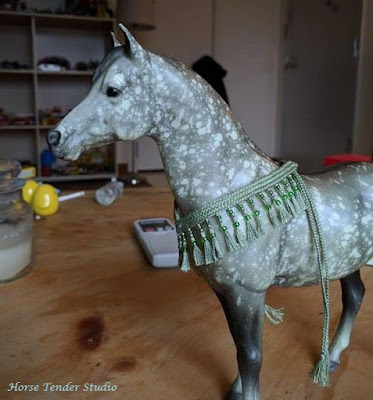 I've been slacking off on posting here for a little while now, but I've been busy behind the scenes.  I've been making some things and thinking, a lot.  When my blog goes quiet, it's almost always because I'm dealing with "stuff".  Mostly mental/emotional woes.  There's been a lot of that lately.  This post has been rattling around in my head all this month, but parts of it have gone on for years.  You might want to grab a beverage and a snack before we get started...


Anyone who has read my blog for a bit probably already knows that I've been struggling with... too much stuff.  That being: material things cluttering up my studio to the point where I actually do most of my work in the living room...  Ridiculous, yes.  Though partly that is because I enjoy binge watching on our big screen, I would like to be able to create more things in my, you know, creative space.

I'm also dealing with a lot of mental clutter as well.

For a while now, I've been thinking that a big cause behind both sources of clutter is that I just have too much to do.  Or rather, too much that I want to do.  For a looong time, I've joked that I'd have to live to be 300 to do all of the things that I wanted to do, as far as creative projects.  That may not even be an exaggeration.  That may not be enough time.

For the past few years, I've ranked my creative pursuits in my head:

1 - model horses (this is still a broad category, which includes: sculpting, painting, tack making, prop building, showing..  etc, etc...  I used to think that painting and sculpting ranked over tack and props, but I'm not sure on that - this could be a post all on it's own and may be in the future)

2 - paper crafts (hence my mountain of paper, card stock, a bajillion stamps, stickers, all sorts of gadgets and gizmos and paraphernalia)


I've gone around and around and around with this, for years.  I was recently talking to Jeff about all of it, again.  I told him I felt like NaMoPaiMo was an eye-opening experience.  I felt far more joy painting Antar and seeing his presentation set through to completion, than I think I've ever felt doing anything in category two or three above - or anything really, unless it be training real horses.

His response was somewhat surprising, but maybe it shouldn't have been.  He said that if he had total control, he would pull everything out of my studio room and only put the horse stuff back in there, get rid of everything else.  He's suggested for a while now that I do just that.  I thought about it and said that I'm thinking that's what I should do too.

Easier said than done, of course.

I did start on the process, not in so drastic a way, simply because I'm quite sure he doesn't want the rest of the house buried in my craft stuff while the Great Sort (number 683) occurs.  Instead, I pulled out all of my rubber stamp collection, piled it on my desks that I'd cleared off for my klast minute painting marathon on Antar, and went all KonMari on the mountain of stamps.  I considered each stamp in the pile, one at a time: "Does this spark joy?"  Yes, move to keep pile.  No, move to go away pile.

While a clean sweep does sound appealing in its own way, I don't think it's entirely realistic.  I DO have stamps and "other" craft things that spark joy.  I would still like to be able to make a greeting card or three when the mood strikes me, but I don't need enough supplies to open my own store.

Next comes the "getting rid of".  I know that I should probably just bundle it all up, drop it off at the thrift store, or put it in the front yard with a "FREE" sign (or throw it away), and be done.  That's what the experts would say.  However, that's hard for me, because I can't look at things that have value and not try to get at least some value back out of them.  Maybe it comes from growing up poor.  Maybe it comes from the fact that I don't feel secure in my life right now.  Maybe it's because some of these things (like stamps from my Granny) have sentimental value (that's the worst when it comes to getting rid of anything, I know).  Maybe it's all of it.

I was thinking that I should set a hard and fast deadline for myself.  Say, give myself a week to try and sell whatever is in the go away pile.  After that, it all gets donated or given/thrown away.

There is a deadline of sorts coming up, with scary speed.  In just over a week, I leave to go on my visit back to the U.S.  I'm trying to decide if it would be nice to come back to a cleared out studio (in other words: should I bust my butt over this next week - with all the other trip pressures looming - or not) or if it would be easier to go through it when I get back, with a fresh mind - after I've been out of THE MESS for 6 weeks or so.

What I do know is that a shift needs to happen and I'm feeling fully on board with it now.  This is thanks to Jennifer Buxton's idea of NaMoPaiMo and the realizations I had as a result, on what makes me happy.


I didn't really have any pictures to illustrate this post, but I think this one is appropriate.  I shared it on my Facebook page yesterday.  These little tassels make me a lot happier than a pile of rubber stamps do. 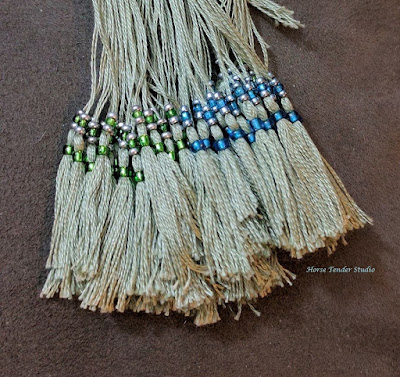