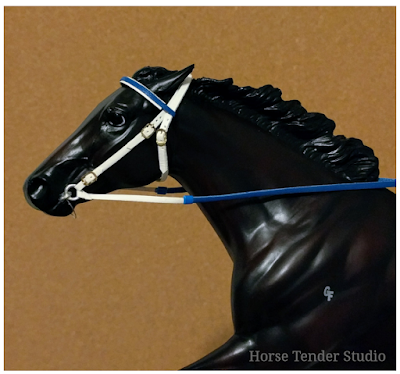 Followers of my vlog will know that I was given a model of Black Caviar while on our Australia trip (I don't think I've blogged about her yet...) and that I've been wanting to make a set of portrait tack for her for National Model Tack Month (April).

Tonight I finished assembling her bridle.  That just leaves the saddle.  I've got a couple of days left, should be fine!  Right...?

If I were a racehorse, my style would totally be that of a closer - cruising along in the early going, maybe even trailing the field, until that final turn.  It's about time to start the stretch drive!  I suppose I just did.

For now though, my supervisor seems to be making it clear that it is bedtime. 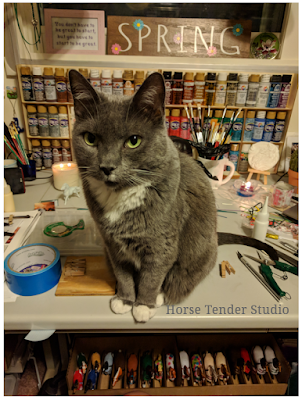 Tomorrow Jeff and I are planning to take a bit of a road trip over to Hirosaki for their 100th Anniversary Sakura Festival.  I'm really looking forward to it and hoping the sakura are still blooming there.

For the rest of the weekend, I have a huge, complicated laser order to finish up...  and a racing saddle to build.  ;-)

Yeah, I think all of my vlogs are "informal" - haha!  Anyhow, I decided to finally stop prepping stuff and do a nighttime video.  I'm hoping to do another one (in the daytime) in the next few days.

Also, this weekend is the Sakura (cherry blossom) Yabusame (traditional Japanese horseback archery) competition!  I will be taking a ton of video and pictures as usual and am hoping to do an actual vlog from there - if I can remember...  This whole video thing is still really new to me!

Without further ado, here's the latest video!  (the thumbnail is funny to me:  Look at Van Gogh!  Look at him!!)

I hope everyone is having a good start to the week!  :)
Posted by Horse Tender at 9:19 PM No comments:

Prep ALL The Things!!

Hang on, a quick note here: I'm sure you've seen an "ALL the things!" reference before.  What you might not know is the origin of it, or in particular the "crazed" artwork that often goes with it.  The source would be the hilarious blog, Hyperbole and a Half.  In particular:  "This is Why I'll Never be an Adult".  Many, MANY people have made their own "____ ALL the things!!" memes, with her artwork from that panel or an edited version, but often I don't see credit given, so I had to be sure and do it here.


Prepping is not something I enjoy.  To use a drastic custom horse for an example: I absolutely love the repositioning part, most of the sculpting, and the finish work.  But not so much the tedious (and oh so very necessary) prepping part in between.

I think my dislike of it is two fold.  One: I'm often impatient to get to the painting part, and two: I'm a perfectionist (ugh), so it feels like a job that is never really done.  I just have to find that elusive "good enough" stopping point.  (which is why deadlines are helpful - I can't pick away at a horse for years if I've only got a week...  or a day...  to paint it!)  ;-)

For some reason, since the Australia trip, I've been on a massive prepping spree.  I've been scraping, sanding, and primering (priming?  eh, you know what I mean) a big heard of OF SMs, skiving enough leather lace to outfit a whole herd in all sorts of strap goods, and finally sorting and prepping my collection of tack making hardware.  I pulled all of the Rio Rondo stuff off of the parts trees, sorted it into some GREAT new container boxes that I've found, and have been working my way through it all, filing off the burs. 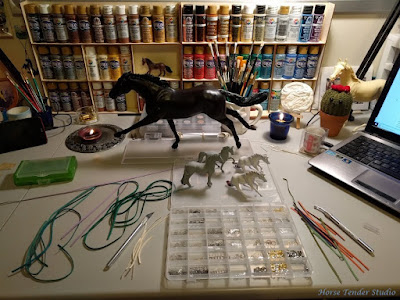 I'm trying to make the most of the odd desire to prep things, even though I think it might stem from a bit of anxiety that I'm having about my National Tack Month Project.  That is to make a set of racing tack for Black Caviar.  It's something I've never done before, but hey, that's the point of a challenge, right?

I may also have a PILE of other tack by the time the month is up.

After all, once I switch out of prep mode, I'll have a bunch of prepped stuff to make things with!

Posted by Horse Tender at 4:08 AM No comments:

Spring is my favorite time of year.  I love watching the trees and flowers wake up after winter and color the world around me once more.  In Japan, it also means the season of Sakura (cherry blossoms).  Right now there are buds on the trees and I'm so eager to see the Sakura again.  We have been here for almost three years already and, without a doubt, Sakura season is my favorite.

Things have been... complicated since I last posted.  We are still dealing with a big Max-sized hole in, everything.  I had underestimated how hard it would be after he was gone.  I thought that since we knew - for a few months - his time was running out, it would make his absence easier to handle.  I was so very wrong.

In happier news: A week ago, we returned from a two week trip to Australia - a lifelong dream for me.  My feelings since the trip have been all over the place.  We had an absolutely AMAZING time, it ended up being so much more than just a "vacation".  In a lot of ways I felt like I was catapulted out of the rut I've been in for years.  I'm striving to make the most of that and hopefully not slide back down into it.  I have plenty to share about that trip and hopefully I will soon.

I guess the point of this post is just to say "hello", I'm still here, still working, still pushing forward, still hopeful, and very much looking forward to the Sakura! 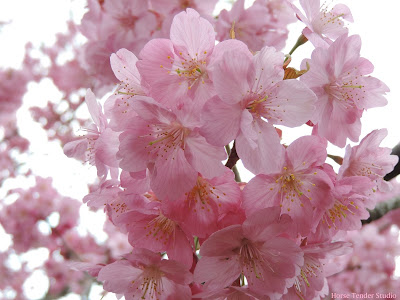 I hope everyone has had a wonderful Easter Sunday!