How To: Chick Roosts

To my regular readers (is anyone left? haha), a brief explanation first.  A couple of weeks ago, we received a "surprise box" that we ordered from Cackle Hatchery.  This is a box full of baby poultry and it sounded like a ton of fun (it is!!).  Jeff and I have talked about having chickens for years now (he grew up with them) and since we now have 5+ acres in a farming area, and winter is finally over, we decided it was time.   I had researched many breeds and was having trouble narrowing it down.  Plus, it seemed they were going to be hard to find locally.  Enter Cackle, which came highly recommended by a great friend.  I looked at their site, saw the surprise boxes, and here we are!

We wanted to provide enrichment for them and so we set out to put together some perches or roosts for the wee chicks.

I should also mention that before the box arrived, but after we had ordered it, we did stumble across some Gold Laced Wyandotte chicks at the local Tractor Supply.  They were a breed on my wishlist and so we grabbed them.  They were the "advance party" before the box got here.  As a first time chicken raiser, I had a bit of a concern about taking on 40-50+ at once for my first time.  Could I keep baby chickens alive?  According to the Wyandottes: Yes, I could.

We got the first group on April 1st and made the first perch, April 3rd.   Shortly after the surprise box arrived, on April 15th, I decided to make another perch for the Wyandottes and make alterations to the original design for the surprise chicks.

Here's how we made them:

* Yardsticks (we got ours at Lowe's, for just under $1 each) (you'll need 3 yardsticks for a one sided roost, 5 for a double sided one)
* 1/2" dowel rods (again found at Lowe's) (I bought the 72" ones and cut them into 4 pieces for 18" perches)
* Wood glue
* Some type of clamps, I even used large binder clips on the second round
* Something to cut the wood with - I used a scroll saw, because it was handy and portable.
* Drill with 1/2" drill bit for wood
* Pencil to mark cuts and holes
* Something to mark angles with is helpful, you'll need to cut a few 45 degree angles.  Without an actual angle tool, you can also use a piece of the yardstick, laid cross ways, to draw a square on the material and then slash through corner to corner.  That will give you a 45 degree line.  (At the center of those slashes is also a center point to drill a hole.)

I hadn't taken step by step pictures, but did take a few along the way.  So I'll try and explain how we put them together.  Hopefully it makes sense!  Feel free to comment down below if you have questions.  At some point, I may try and do some more detailed photos of the process.


For the first one, we started with two pieces 12" long and glued them together at the ends to form a 90 degree angle.  We also made a support for the diagonal piece by cutting a piece as long as the width of the yardstick, plus a 45 degree angle.  That, and the vertical, go on the same side of the bottom piece, as seen in the lower left of this picture: 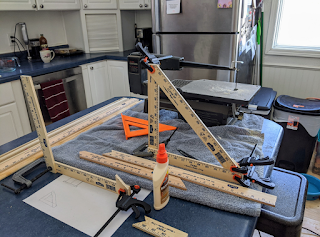 For the diagonal, cut a 45 degree angle to line up the bottom end with the bottom horizontal and the small support piece.  Then cut another 45 degree in the top, lined up with the top of the vertical.  Glue the ends down. 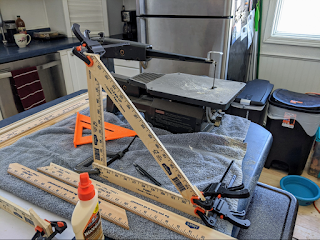 Here's another view of the end.  You'll want to make two of these.  We did them in a mirror image, so the whole thing would be symmetrical, but that's probably not critical. 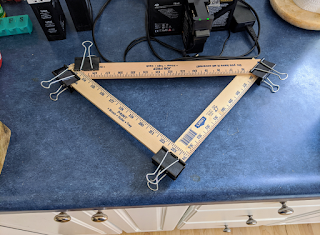 Next, mark the holes for the dowels and drill them out.  I had bought a couple of 72" dowels from Lowe's and cut them to perches of 18", which gave 4 per long dowel.  We did one in each end and an additional one in the middle of the base and the diagonal.   Drill the holes, and glue in the dowels.

Here is the first perch we made, all finished: 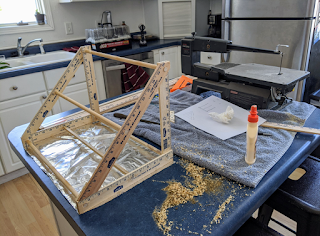 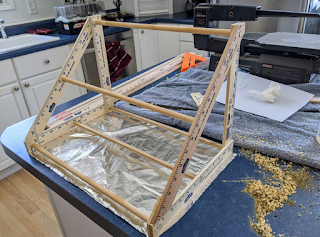 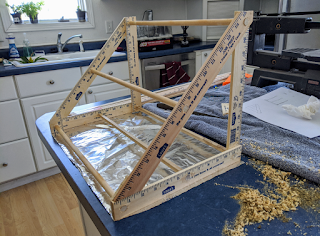 And here's that first perch, in the brooder with the little Wyandottes.  Before they started perching on it, they really liked to sleep under it: 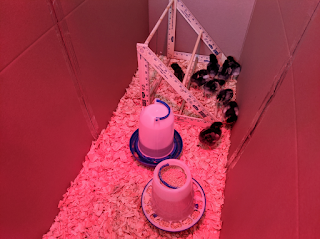 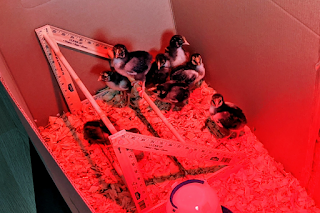 They've got it down here, at two weeks old: 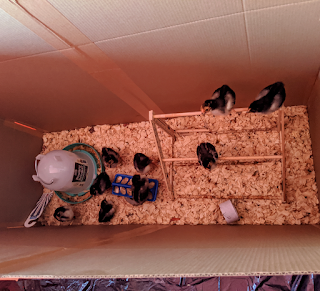 At about three weeks old, I made them another one, since they all wanted to use the one they had and couldn't all fit!  They had also been moved into a bigger brooder so they had more room. 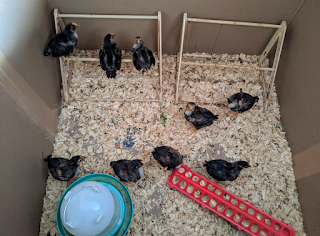 For the surprise box of chicks, I wanted to make a larger, double sided perch.  I started with a 24" horizontal and a 13" vertical, to raise the base an inch off the bedding.  We realized it would have been good to raise it up out of the bedding, to offer them BABY baby perching options.   I also added an inch to the bottom of the little end support pieces.  Then measured and cut the diagonal pieces the same as before, just twice as many 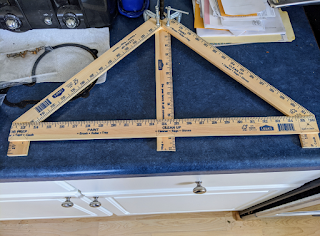 All other steps are the same, marking holes, drilling, and gluing in the dowels - just more of everything.

And here is the double perch in the brooder with the surprise chicks.  They LOVE it and used the baby perches, just off the bedding a ton in the beginning.  They also really like sitting on top of the yardstick side pieces.  I often find them sitting shoulder to shoulder on/in the ends. 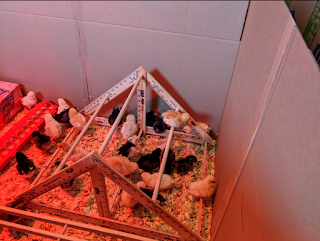 I hope this helps if you are interested in making a baby perch/roost for your chicks!