Wait, what, I'm doing a blog post??  Yes, yes...  I've been really neglecting my blog (and vlog).  I could trot out some excuses: I've been busy, I've been depressed, I've just gotten out of the habit of blogging - that last is the most to blame at this point - and discuss them, but instead I'm going to forge ahead.  Onward and upward!


I've mentioned Yabusame (traditional Japanese horseback archery) on here a few times, including the one time I got to take a lesson at the horse club closest to where we live.  During that lesson, I rode a horse around a bit and tried to practice the Yabusame riding position.  I'd also had a brief bow lesson on the ground.

The closest I'd come to doing Yabusame "for real" was when I paid for a Yabusame experience at one of the competitions: wearing a traditional outfit, shooting the (looong) bow from the ground, and then sitting on a horse in front of a target to take the three shots.

I knew before we'd even completed our move to Japan that I'd like to learn the horseback archery, if I could.  I had no idea what to expect, where I might find it happening and if it would even be possible to be involved.  As it turns out: about 45 minutes away and not only possible, but encouraged!

For a couple of years I've put off getting serious about it - taking lessons, entering competitions - because of the cost.  However, our time here is winding down, which makes me very sad.  It's basically now or, most likely, never.

So, I've joined the riding club, started taking lessons, and...  I'm officially signed up to enter the Fall competition in just under a month!

I've taken about 6 lessons now I think, spread out over the past 4 months or so.  This past Monday I had one and Jeff was able to come along to take pictures and video!

Without further rambling, here are some pictures:

We don't know which horse we are riding until we get there.  My ride for the day was Toby, a sweet palomino gelding. 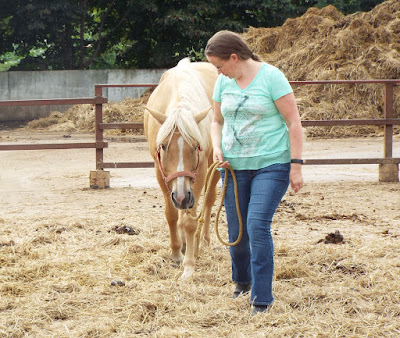 We'd been paired up in one lesson before.  Other horses I've ridden for lessons have been Suzaku and her sister, Opal.

In the barn, getting cleaned up.  His mane is SO thick. 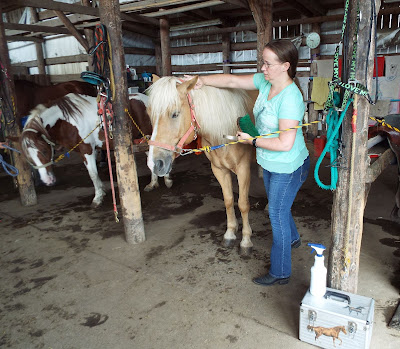 Chatting with Angie, she would be riding Opal.  Angie and I had met 2-1/2 years ago at an outreach event the club was having.  She is also from the U.S. and is here teaching English in some of the local schools. 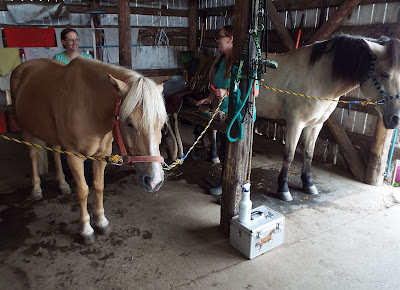 Time to saddle up.  Most of the saddles used for Yabusame are Western.  I've seen one Australian stock saddle and a couple of traditional Japanese saddles at the big competitions. 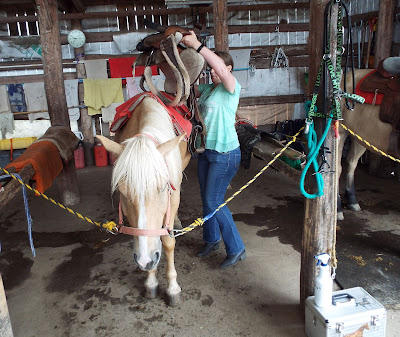 Bridle time.  Toby's bridle had some pretty turquoise accents on it. 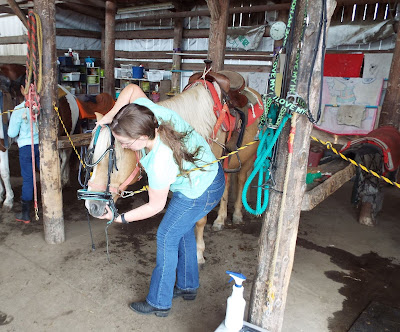 After getting our horses ready, all of the lesson participants mount up and ride to the track, down a dirt road a little ways behind the barns, and past the pastures.  It's a pretty ride.

Once we get to the track, we do several warm up passes, the first at a walk.  I think here I was admiring some clouds in the sky. 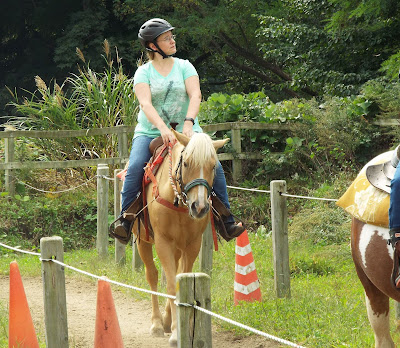 "I'm on a horse!"  Though it's happily become more common than once or twice a YEAR over here, it's still wonderful, every time. 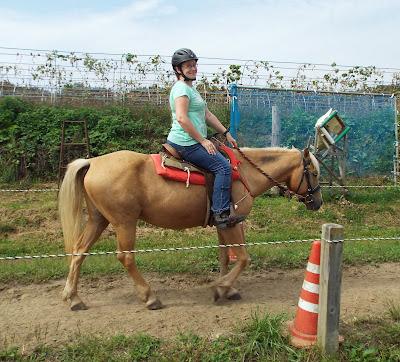 That picture also gives a glimpse of close to the Yabusame riding position.  The stirrups are actually tied forward.  You then lean forward, stick your butt out, arch your back, chest up....  The idea is you are supposed to take the motion of the horse with your legs while your upper body doesn't move.  I'm not there yet!  Some of the people who are really good appear to be floating above their horse.  The top of their head won't move, while their horse races underneath them.

After a pass down at back at the walk, we trot, then canter.  Then we get our bows and the horses know that it's go time.  They will run faster as soon as we have a bow.  I've also noticed that some will run even faster when we hit a target.  They know their job.

This was the first day I shot all three arrows on most of my runs.  So far I'd been shooting only one or two, but I was determined to speed it up a bit and get all three out.

Here I've launched the first arrow and am pulling out the second. 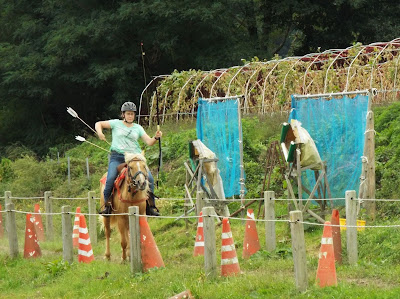 Firing that second arrow.  I have a bad habit of holding the bow at an angle - it's supposed to be straight up and down.  It's a habit from the Plains Indian style archery that I had learned first. 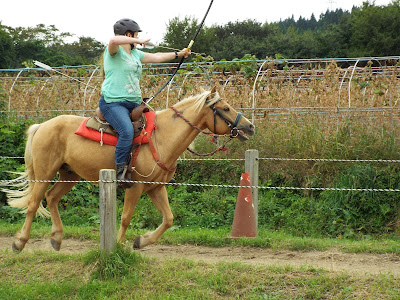 I love this picture, this is the lesson group walking back after one of the runs.  Along the walk back, the instructor hands us our arrows and gives up feedback, tips to work on, or just says "good" with a smile.  Angie is in the lead, then a little girl who is very good - better than all of us I'd say - me, and a woman who I think may have been fairly new? 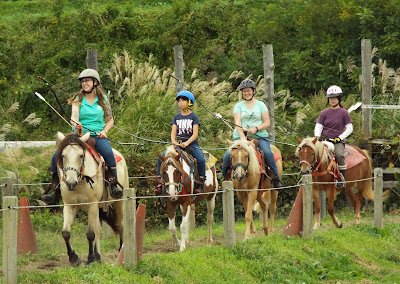 Coming down the track for another round, trying to remember the instructor's words "up, push, pull".  The process of putting an arrow to the bow, drawing, and firing is actually a very precise 10 step process.  There is a lot to remember! 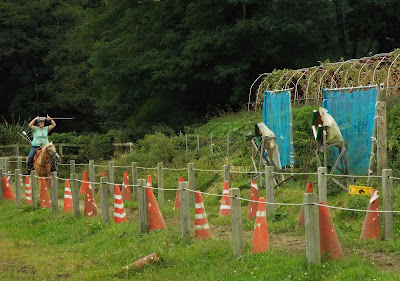 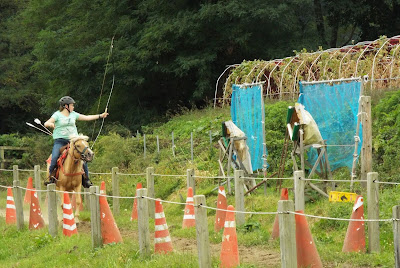 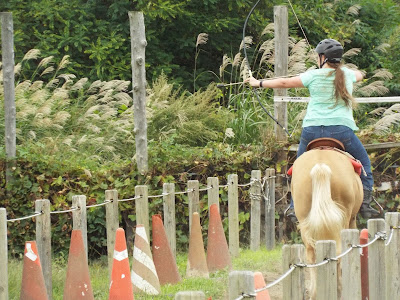 Another "gangsta" sideways bow shot.  I really need to work on that... 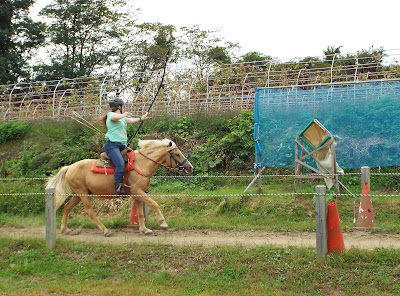 Did I make it?  I made a few in the target that day.  The instructor is at the end of the track. 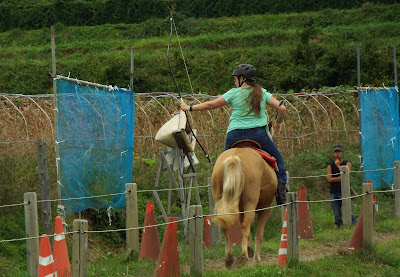 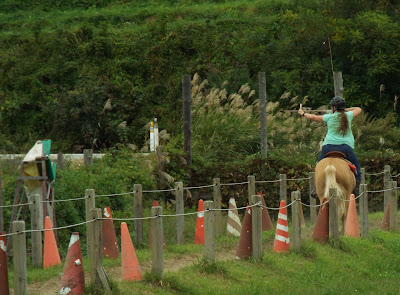 The last picture is from far away, but I thought it was a neat shot.  Toby launching into stride as I prepare for "up, push, pull".  The horses know that once we have a bow and arrows, their job is to run down the track. 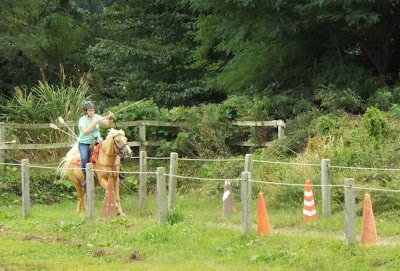 To wrap up, here are a couple of videos that Jeff took!

This last video was my best ever run - so far.  I fired all three arrows, making it into the target with the first and third!!  The instructor and I both were laughing at the end, because Toby slowed down on his own for the end of the run and I took the shot anyway, at a trot, and made it in!


The competition - which is the World Yabusame Championship (no pressure) - is October 20-21.  I'm planning to do as much practice as I can before then, including weekly lessons, at least.  Another friend loaned me one of her bows, since she won't be competing this time due to an injury, and Angie loaned me some arrows.  So I'll be doing some bow practice in the backyard.

Oh!  And I'm having a traditional riding kimono made.  I'm very excited about that!