While things have been relatively quiet here on the blog front, I've been busy making (or finishing) a bunch of things.

Here are a few quick pictures of what I've been up to.

The next batch of saddlepads are now finished with felt backings and signature tags: 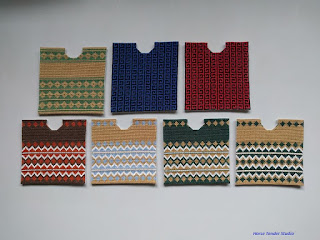 I've also been making a bunch of saddle stands.

Four of them are unfinished wood: 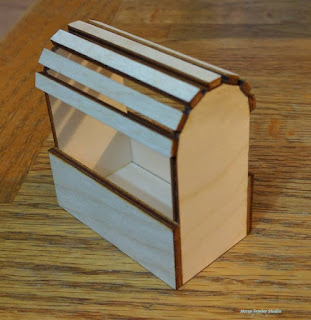 Eight stands are in a variety of colors: slate blue, black, dark pink, red, and green.  I've done two of each color. 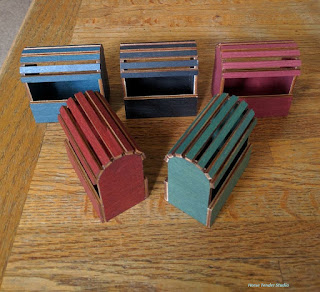 They turned out kinda cool! 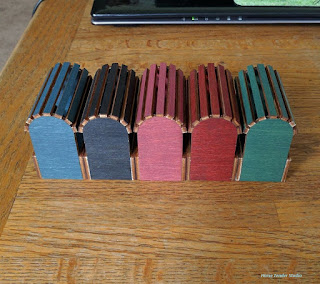 Next up is the daunting task of (properly - or as best I can) photographing each new thing and getting them listed in my shop.  This is not the fun stuff, for me, which - as I've said before - is why I constantly have a backlog of finished pieces that need to be photographed and listed.  Oh, I do enjoy taking pictures, but I'm not that good at it and my product photography often leaves much to be desired, so it's not something I look forward to.  Still really need to work on that...

I'm going to try and buckle down though and get all of these squared away and up for sale.  Be on the lookout for them!  ;)

Posted by Horse Tender at 7:25 AM No comments: 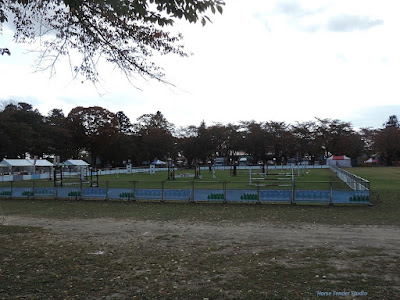 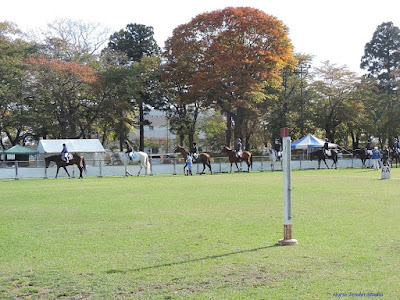 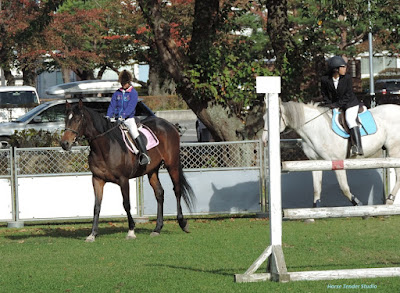 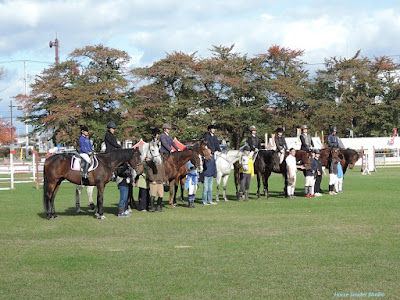 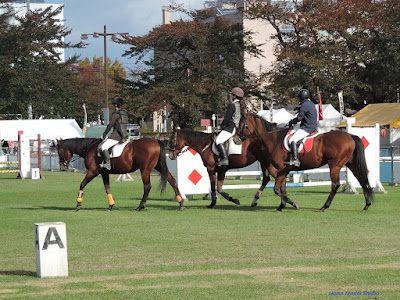 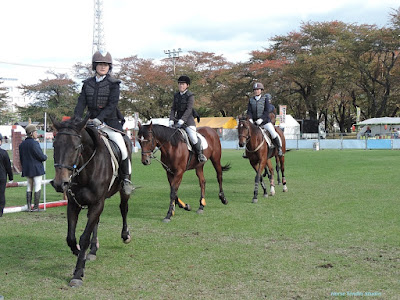 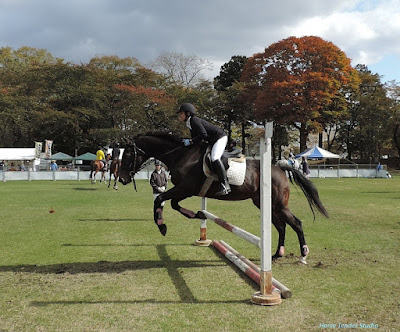 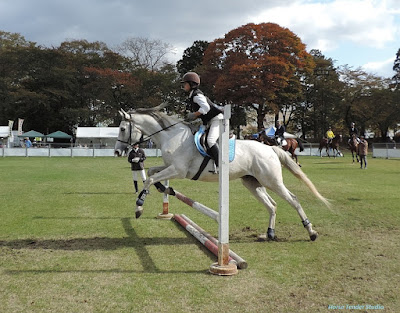 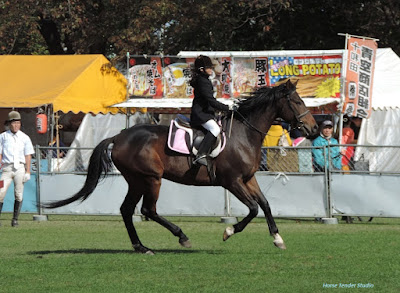 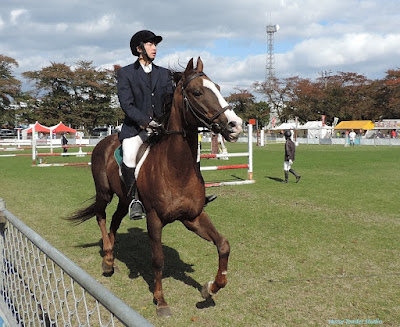 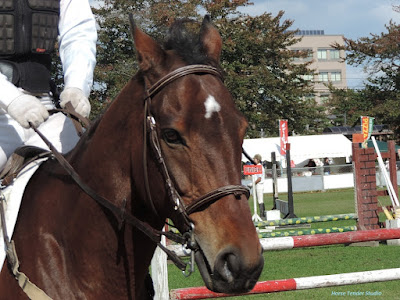 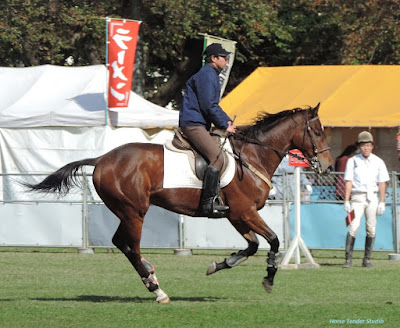 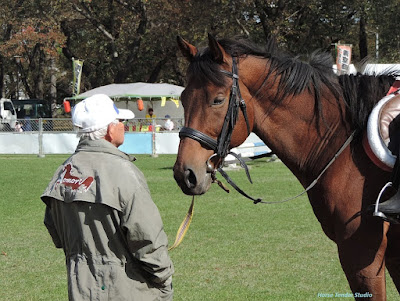 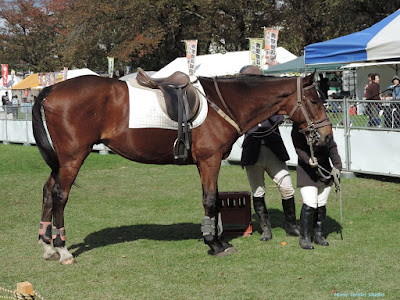 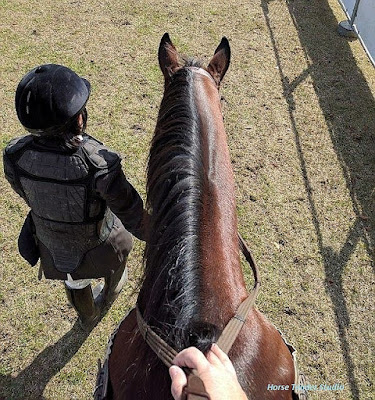 Posted by Horse Tender at 6:14 AM No comments:

One year ago I was randomly able to ride a horse at a big horse festival.  I had thought I would be given a "pony ride" but didn't even care; I had wanted to be on a horse SO badly.  On that day, it turned out I was able to ride all by myself. 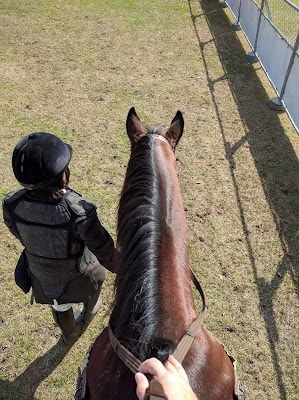 But still, I rode a(nother) horse!

Actually...  I rode two horses today.  More on that, and this year's horse festival - which was actually held over the past TWO weekends, coming soon.

Newest Member of the Herd

A few days ago, a new horse joined the herd here in Japan!  I wanted to wait to announce his arrival until he'd had his first photo shoot at the beach.  Today was the day. 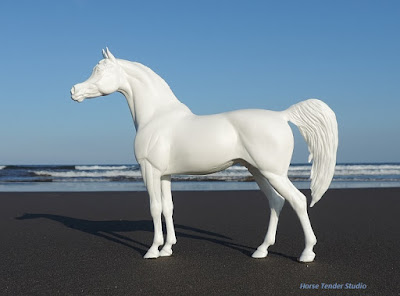 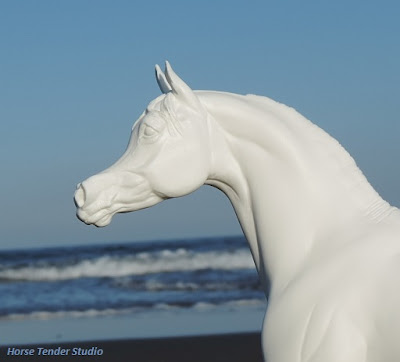 Much like Chewie who arrived before him, I think I already have a color picked out for him.  However, like Chewie, he might stay "nekkid" for a while.  We'll see...

What is that color?  I'm leaning toward black.  I've always had a thing for black Arabians.  Also, one of the biggest reasons I bought him was to be a model for Arabian costumes.  Black would make a lot of colors "pop".

I'd love to take this guy around on tours of Japan, but he's quite a bit less portable than little Chewie.  He's a full Traditional scale, Chewie is a Little Bit.  ;)
Posted by Horse Tender at 6:49 AM No comments:

Today we went to the beach again so Jeff could fly his little fleet of quadcoptors and I could attempt to take more horse pictures - hopefully for photo showing.

The sun was bright today, the opposite of the problem I had last time, when it was dark and stormy.  I haven't decided if the pictures from today are too bright and washed out (I really hope not...) and haven't resized any of them yet to share, save for this one. 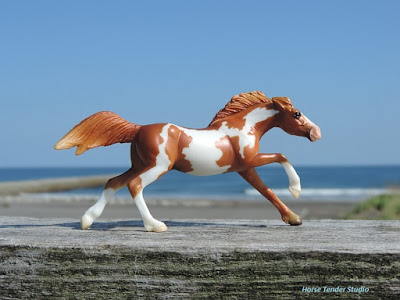 He is Apollo, named for the god of the sun, inspired by his brilliant copper coat.  Can't you almost picture him racing across the sky?

Much like how I thoroughly enjoy creating things, but not so much the process of getting them documented and listed for sale or what have you... I enjoy taking pictures, not so much the formatting and attempting to edit them.

I hope the pictures I took today will be good enough to use.  I'd like to go out and get a BUNCH more this week, of other horses, before sending out my next MEPSA entry/entries.  So far I've been entering the same string of horses/photos in the Mini Specialties, but I have plenty more minis to be able to add a bunch more to my string.  Also would like to start entering some of the other shows too (larger than Mini).

This installment of Motivation Monday is a quick one.  I've gotten wrapped up in some things tonight and waited until I'm one foot in the bed before posting this.  Took a quick glance at my collection of pictures to see if anything jumped out, and thought that this one says a lot, all by itself. 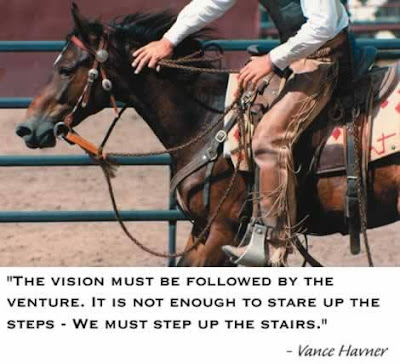 Today's vendor show went very well.  I think I'm running on about 10 hours of sleep over the past two nights and I've been hanging on the ropes since about 3:30 this afternoon.  It's now almost 8pm, that was my goal to stay up until, hoping I'd sleep though the night - not wake up in the middle of the night, wondering what century it is.

Here's a quick picture of my table.  Yes, I had my very own table for crafts at this show, versus cramming a pile of my stuff on the end of our laser table: 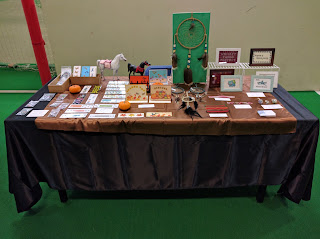 I'm hoping to do more of a post about it later, maybe tomorrow.

For now, I SLEEP.

I apologize for the radio silence this week.  This coming Saturday is our next vendor show and it's supposed to be "The Big One", or so we have heard.  Due to being overseas and the time it can take to ship things (more on that later...), many people stationed here do their shopping at this "Fall Show" for Christmas presents to send home.

So we had been planning, hoping, to be READY for this one (...).  We are actually going to have two tables for the first time, one for each of "our" businesses.  The laser, and my crafty things.

However, lately we have been quite slammed with laser orders - a good problem to have, but still stressful.  On top of that, both of us have been sick much of the past two weeks and not up to doing much.  As a result, this week started with quite a log jam going on, topped off by the "Big" show now barreling down on us. 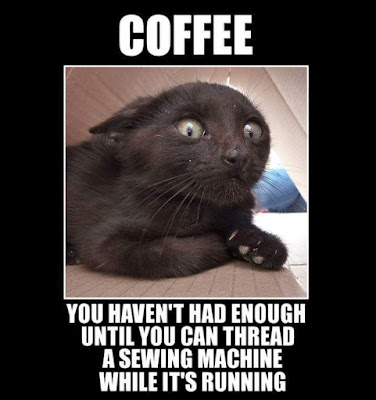 I haven't much time to craft and no time for horse stuff.  :(  The laser is pretty much the equivalent of my day job and, for the moment, business is close to booming.  There's been a lot of overtime going on.


On the Studio front, I've decided that this show will most likely be the "last hurrah" for a lot of the other crafty things I do - at least as far as making them any kind of priority and attempting to market them.  After this week of madness, I'd like to throw myself back into the studio organization with a goal of purging (even more) crafty stuff.  What really brings me joy are the model horses: customizing, sculpting, painting, hairing (!), making tack and props, showing, and so on...  Most of the other crafty things I've started doing over the years were poor substitutes, outlets for creativity when I "wasn't doing the horse thing anymore" (was just punishing myself, really).  Not to say I didn't/don't enjoy them, but I enjoy the horses more.


Unrelated, but I mentioned it up top:

Shipping things:
Five weeks ago, I ordered a book that I have been wanting for... years.  It's been a bit of a saga to find it and get it, but the time was right, it was available, and I pounced.  I have never been SO eagerly awaiting something to get over here, and...  it is taking its sweet time.  I usually don't haunt the tracking information on a package, but after 3 weeks and no show, I started watching this one.  It was shipped the day after I paid for it, was zipping around for a week, and then stopped.  It sat in one spot for an entire month (I was juuust about to report it lost to the seller) before it started moving again, just a couple of days ago.  I don't know what happened, where it is now, or when (if?) I'll see it.  I'm trying to look on the bright side, for this week anyway, and realize that even if it WAS here, I wouldn't have the time to use it.  (It's a how-to book, I'll share all about it when it gets here - optimism...)  At this point I think everyone here who knows me is tired of hearing me go on about the book.

I keep asking around:
How long it can take for things to get here?  I've never seen this before. I've heard horror stories about some things taking months, but so far it hadn't happened (yet).
Has anyone had this happen before?
Should I be concerned?
Should I just keep waiting, or figure it's lost?  (before it started moving again)

Now I've told you all about it too!  Ha!

I haven't posted some in progress saddle pad pictures in a bit, so I thought I'd share a quick picture of the one I've been chipping away at lately. 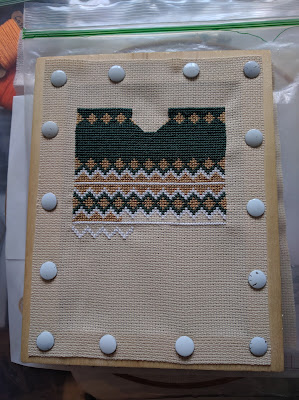 This is actually the third one in this pattern that I've done.  It has taken me quite a while to do this one in particular and I think I might take a break after this one... Though I may always have one in the works, they do make a great portable project, I think I may take a break from "cranking them out".  ;)


Posted by Horse Tender at 7:39 PM No comments: