At Dawn, We Ride!

When I was a teenager, I was a fairly avid cyclist.  I thought nothing of riding 50 miles in a day (and often did).  I spent a fair bit of time hanging out and chatting with a guy in the neighborhood who was pretty hardcore, he regularly did things like Ride the Rockies and Pedal the Peaks.  I had aspirations of doing such things - American Flyer was one of my favorite movies, in addition to the usual roster of horse films.  I pretty much rode the wheels off of every cheap WalMart bike that I got my hands on.

I still remember the first time I was in a real bike shop and saw a Cannondale with the STI shifters.  Basically it's a system that makes your brakes and shifters the same lever.  Pull back to brake, push in to shift.  It seemed like magic, but with an $800 price tag, such a steed was out of my budget as a kid.

Fast forward to last summer.  As it turned out, the BX (on base department store) had a wide range of Cannondale bikes.  Our friends John and Holly bought two new bikes and we went to check out the selection.  I found they had several Cannondale road bikes..  with STI shifters.  :-O

My bicycle at the time was a rusty old WalMart mountain bike that wouldn't shift anymore - even after Jeff worked on it and was just pretty much worn out.

Jeff bought me a Cannondale...  with STI shifters.

I rode the heck out of it for three days, planning to launch back into cycling as a way to get back in shape.  It was going to be awesome!

Then, I did a number on myself, a Grade 3 ankle sprain.  No more cycling for me, not for a while.

My beautiful NEW Cannondale sat parked in the living room, while I sat on the couch, elevating and icing my ankle and feeling sorry for myself.

I got back into riding a bit before winter set in and then the snow sidelined us again.

This spring, I've done a handful of rides.  I'm still far from considering myself a "cyclist" again.

Well...  tomorrow is the "Tour de Ogawara", an annual group ride that circles Lake Ogawara, just north of here.  It's a 53km (roughly 30 mile) loop.  As a teen, during my cycling days, it would have been cake.  Now, I'm not so sure.

Nevertheless, Jeff and I are both signed up and ready (as we can be) to go.  The bike rack is on the car, our tires are topped off, our steeds are waiting in the hallway... 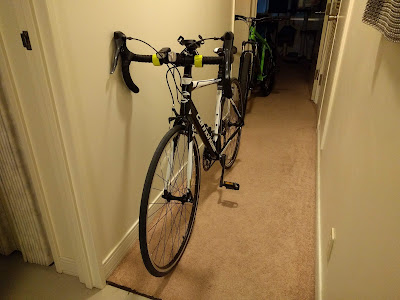 Jeff had bought a new Cannondale too, but he opted for the full mountain bike version.  I call it the Clydesdale.  He's ridden much less than I have and says he'll definitely be earning the miles on his big-tired beast tomorrow. 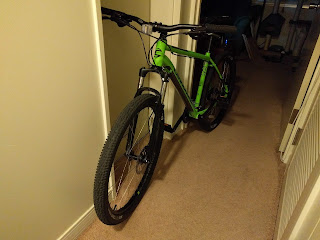 My bike is definitely a Thoroughbred or Akhal-Teke... or gazelle.  She flies.  So I've got that going for me.

Another challenge for us will be the 0800 show time/0900 start time.  Jeff's been on swing shift for a while - generally gets home between 0200-0300 and then we sleep until 0900-1100.  I've been keeping to the same schedule - it makes things easier around here, but makes it very hard to get up in the early mornings!  We are hoping he'll be home a bit early tonight and hoping we can get some sleep before we stagger to the start tomorrow.

A few days ago, he randomly looked at me and asked, "Are we going to die on Saturday?"

To which I replied,