Back Aboard The Coach!

The last time I posted anything about my Epic Stagecoach project was...  Almost 6 years ago.  I have not touched it since then.
Well, that's not entirely true.
Last year, it made its live show debut.  How??  In the awesome Big Dreams class at The Jennifer Show, where it was the biggest dream - by footprint anyhow.  It, and all it's paraphernalia, took up an entire table. 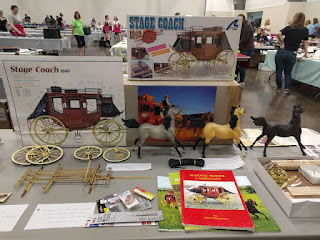 After that, it was all packed away again.

Recently, I've made an effort in my "new" studio room (been in there for over a year, but it still feels new and not moved into) to set up a work station just for the Stagecoach.

Last night, I randomly sat down in the spot, cleared a few things out of the way, and got back to work.
In my last post about the project, I shared how one of the wheels had been shattered.  My plan has always been to use that as an "opportunity" to redo the wheels, having learned MUCH more about actual wheelwrighting since making them.  However, last night I made the decision to repair the broken wheel and move forward... with a footnote.  I will be making sure the wheels are removeable.  That way I can backtrack and do the upgrades at a later date if I want to (and I do).
Before deciding to fix the wheel, I ended up peeling off the "tire", intending to break the rim apart and start the from scratch rebuild.  After deciding to repair the wheel "as is", I decided that this removal was fine to do, it gave me an idea how hard or easy it would be to tear down the wheel later.  It wasn't too hard, but did require some patience. 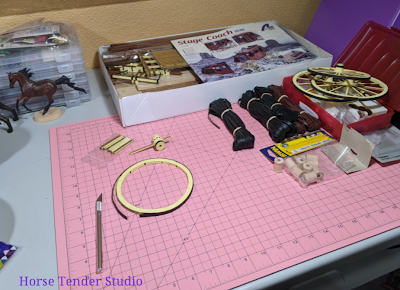 I called it a night last night, after repairing the (long) broken wheel.  Four wheels with spokes again, for the first time in yeeeears. 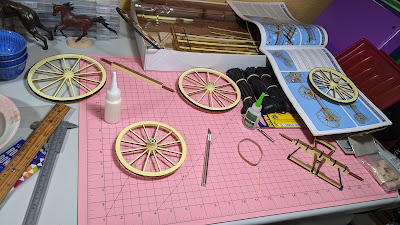 Tonight's task ended up a simple one, but crucial.  It was also something that had had me stuck - bigly.
For such a high end kit, the wheel hubs are quite poorly made.  To the point that the center holes aren't even big enough (or round enough) for the axle shafts to go through!  For years - okay, not constantly, but several times - I'd debated how best to fix this.  Tonight I just did it.
The fix ended up being hand drilling; starting with a bit that would go through - 4.5mm for 3 of them, a tight fit for the 4th - then 4.8mm, then the 5mm that they needed.  I had been hesitant to use power tools on these and was glad that hand drilling worked.  Thanks to Jeff for suggesting the start small and work up gradually technique.

I really wanted to work on the project tonight, to keep up the momentum unexpectedly started last night.  I decided to stop for tonight once I saw this: 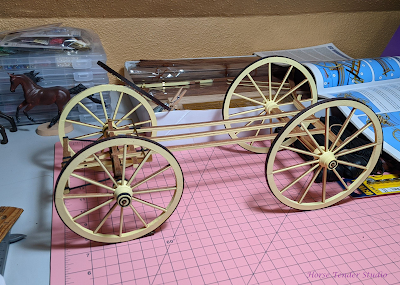 A confession - I'm not *quite* ready to be at this point.  A few other things need to be put on the chassis before the axles are attached.  However, I could not wait any longer to see the "rolling chassis".

I'm taking it slow, I'd like to work on this a bit every day (if possible).  Maybe I'll finally finish it, THIS decade?
Of course there's also the harnesses and horses and...
(crazy laughter fades into the distance)
Posted by Horse Tender at 8:33 PM