Here's a bit of news from the studio for this past week or so.

A few days ago, I wandered through a few stores in town, including an antique mall that I had forgotten about, and my favorite used book store.  In the antique mall, I found a bunch of Breyer and Heartland horses scattered around, and I ended up buying this appaloosa FAM: 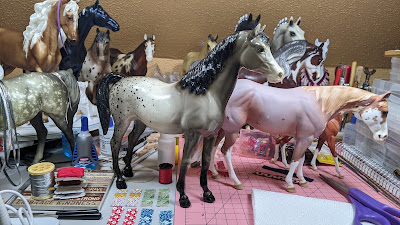 She was in the best shape of the other HSOs (horse-shaped objects) and also the lowest price.  The old Family Arabians bring back nostalgia for me.  They were among some of the, well played with, herd I was given, which started my collection.  Someday, I hope to get Starlight, the Vintage Club Yasmin in that same color.

Other recent new arrivals are Firefly and Hawkeye, standing behind the FAM.  I had fully intended to repaint them, but they are very nice.  It's not like I don't have a ton of other projects right now, so that's far from a priority.

I ended up taking on a commission for a western pleasure saddle pad, using these colors of floss. 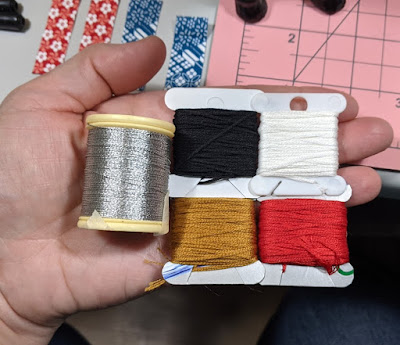 I'm very excited for this project.  The doll that it is being made to match is a favorite of mine, ever since I saw the initial post about her from the doll maker.  After creating the pattern, based on a real pad the owner likes, stitching is well underway. 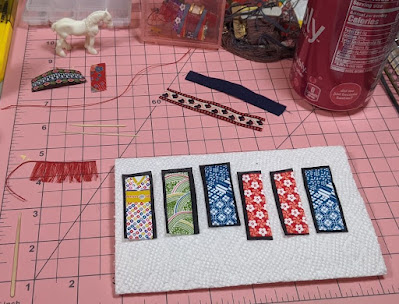 I braided more thread and made more fringe.  Also started cutting out fabric strips.  We chatted on Skype and she liked these colors, red and blue. 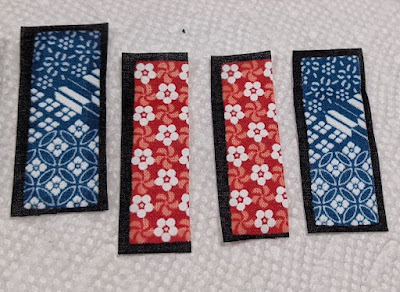 On the left here is the horse this one is being made for.  He is "Robin", sculpted by Horse and Bird Studio.  On the right is the first set I made, in front of the in progress stablemate Arabian regalia set.  Which suddenly looks big here. 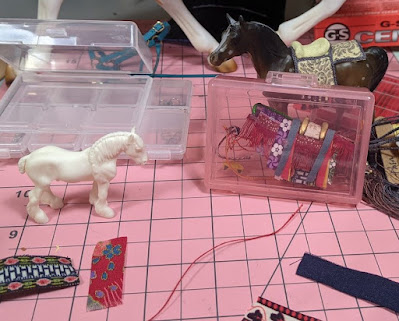 Another bit of news is that I signed up for NaMoPaiMo.  This is the 6th year and I've been in every one.  I actually came close to deciding to skip this one.  I wasn't sure I was up to it.  Though I'm planning to go to BreyerWest at the end of the month and could CERTAINLY use the motivation and an "excuse" to be in the studio right now.

I chose to paint a traditional resin, Yerokayannie - or "Annie", from Hanna Bear of Bear Carousel.  As soon as she had arrived here last year, I decided I wanted to paint her as an appaloosa.  In particular, a varnish roan.  This is a color I've never done before, but I think I have a plan.

First order of business, yesterday, was a bath for her.  Well, the first was actually a bit of prep, mostly some seam sanding.  Then I decided to get some primer on her, before continuing with prep, but she needed a scrub down first. 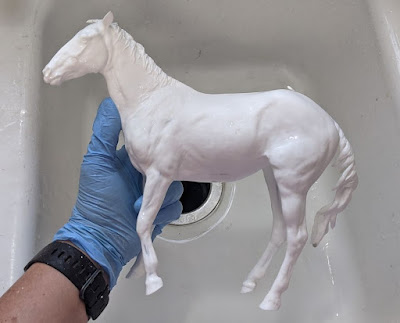 I reeeally didn't feel like doing the selfie this time around.  It's not a requirement, and I really don't like having my picture taken (by me or anyone), AND I'm perpetually tired these days.  In the end I did it anyway.  This was the best attempt, I thought. 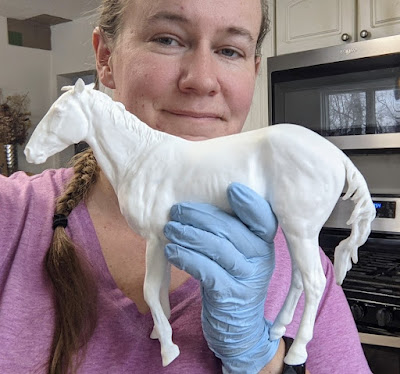 Last night, she was primed.  This picture was after one side had been done. 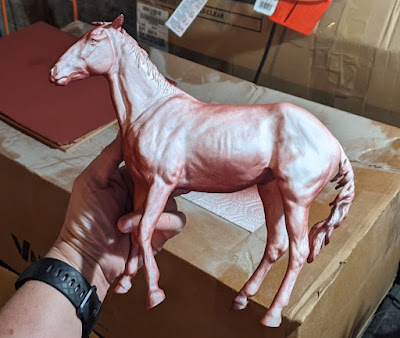 I love the effect that happens when one side is done and the lightest hint of primer spray comes around to the other side.  It's something I often take pictures of.

She's fully primed now and waiting in the studio for prepping to continue.

While I was at it, I decided to wash and prime a pile of medallions... 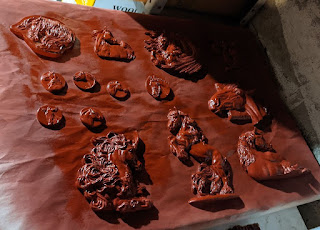 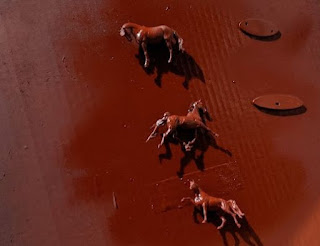 Not the best pictures, I use the dank cellar as a spray booth.  I'm happy to have that option in the winter, the lighting just isn't great for pictures.  I may end up using a few of those as test pieces for Annie.  Most will end up being future sales pieces.

I'm happy it's (finally) February, but that means it's really time to get busy!