A Flood of New Work

I've been working up a storm the last couple of weeks, mainly focusing on dreamcathers.

I've made dreamcatchers ever since I was a teenager. Over the years I have given many away as gifts. My favorite occasions are for a wedding or, in the original tradition of the dreamcatcher, for when a baby is born. I've also sold a few here and there - my "customizeable" dream catchers were a hit at a craft fair years ago. I had let people pick the colors they wanted and I made the dreamcatchers there on the spot. It was sort of a "dreamcatchers made while you shop" idea and it worked out well.

It wasn't until more recently, with the creation of the Studio as an entity, that I decided I'd like to sell them on a larger scale. I realized recently that I didn't have much in the way of an inventory. I had boxes and boxes of supplies, but only a couple of finished pieces. This is due to the fact that the majority of my dreamcatchers have been custom made - either as ordered, or as I made them for those special ocassions.

So, about two weeks ago I pulled out all of my supplies, popped on a movie and went to work. I've now made my way through several movies (and a couple of TV series on DVD) and I have about SIXTY brand new dreamcatchers ready to make their debut!

This is one of my favorites: 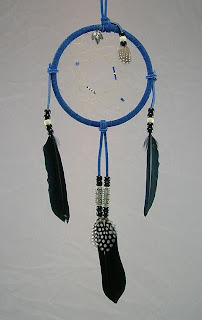 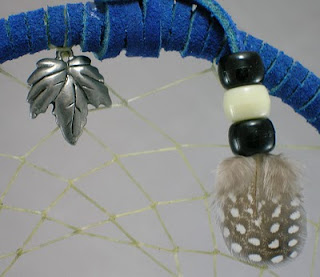 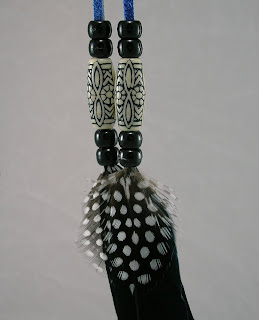 I now have quite a wide variety of dramcatchers, in sizes from two to nine inch rings, made in a rainbow of colors, and many with cool little charm and stone accents on the webbing.

Over the last couple of days I've been working on the time-consuming task of taking pictures and getting those uploaded to the store, the Studio's Facebook page, and the Studio site itself.

I foresee many more hours spent uploading photos, as I still have to repopulate the store and sites with pictures of all of my other items as well!
Posted by Horse Tender at 4:52 PM