Our Pets: Neytiri, or "Kitten"

I thought it might be fun to start a series of blog posts for our menagirie of critters.  Between Jeff and I, we have: 3 dogs, 3 cats, 2 salamanders, 2 rats, 1 horse, and a betta fish (in a pear tree).

I thought I'd start this series with one of the cats.  We often joke that we have 2-1/2 cats, because two of them live inside, while the third is a stray who "adopted" us a few years ago.

The youngest of the group is Neytiri, or as we usually call her, "Kitten".  She has quite a story...

Last year, in late spring, a little of kittens appeared at the barn where I kept my horses.  It wasn't unusual to see kitten there; the resident population of barn cats has babies now and then.  What was unusual is that these kittens were tiny, barely walking, and didn't seem to have a mother.  We starting bringing them some food and water and realized that they didn't really even know how to eat or drink yet.  I found out from the owner of the property that the kitten had been dumped at the barn - they didn't have a mother there.

One of the kittens was a tiny calico, the others were orange tabby colored.  The little calico became my favorite, I used to scoop her up and love on her whenever I was at the barn.  I heard her learn to pur when being held, stop and go at first, then a steady, tiny, rumble.

One of the kittens, a tiny orange tabby, didn't make it.  I found him one night very weak.  I took him home and tried to save him.  I called my vet and he told me to try some maple syrup on the kitten's gums to spike his blood sugar and give him enough energy to eat.  Sadly, he was too far gone and passed away the next morning.  We buried him in the wooded field behind our house.

That night, I went to the barn and heard a kitten crying and crying.  I searched until I found a tiny kitten inside a wood pallet on the floor, crying out.  It was the little calico.  I carefully got her out and was horrified to see that she was as weak as her brother, she was like a little ragdoll and couldn't even hold up her head.  I called Jeff as I was holding her.  I cried as I told him that I had thought I should bring her home too when I took her brother and tried to save him and now I was afraid it was too late.  I didn't know what to do, I didn't want to take another kitten home and watch them die.  I set her back down on some hay and decided I would let nature take its course.  She kept crying though and I picked her up again.  That time, as soon as she was up against my chest she started purring.  I cried even more and told Jeff that I was going to bring her home.  I didn't want to watch another kitten die, but at least she wouldn't die alone.

When I got her home, I opened up an odd can of cat food we had (we don't feed canned food, but we had one around at the time).  We couldn't get her to eat anything, she was just too weak.  I remembered the maple syrup tip my vet had told me about and I went to grab it.  I was trying to figure out how to get the syrup into her teeny tiny mouth when she started licking it off my finger.  There were happy tears as I said, "Oh, you're a little fighter"  I then left her with Jeff and went to our small local store to buy more canned food and some kitten chow.

As I returned home, I was surprised to see the kitten sitting up in Jeff's lap, looking around.  He told me that shortly after I left, she just sat up and seemed fine.  We tried to get her to drink some water from a little syringe, but she didn't want it.  That's when we came up with "meat juice".  We sucked up some gravy from the canned food, and mixed it with water in the syringe.  She didn't like plain water, but the meat-flavored water was a different story!  She was eager to drink that!  We got her to take a couple syringes of meat juice and she ate some tiny pieces of canned food, then she was sleepy.

We let her sleep in my lap for about an hour while we watched a movie.  We were watching Avatar.  I decided then that if she made it, a good name for her would be Neytiri, after the beautiful, fierce (and cat-like!) female character in the movie.

After about an hour we woke her up and I was devestated when she awoke a ragdoll again, her head was floppy, she couldn't sit up or eat or drink.  So we got out the maple syrup again.  She licked it off my finger and then I saw the miracle for myself.  In about a minute, she raised her head, sat up, and seemed fine.  We gave her more meat juice.

I put her to bed in a box with a heating pad on one side.  I got up during the night to check on her ad see if she was weak again, but I found her sitting up in the box looking at me.  After her two doses of maple syrup it appeared she had pulled through!

Here is the itty-bitty kitty soaking up a sunbeam the next morning: 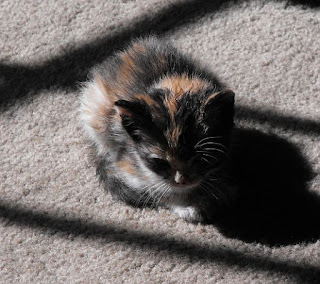 One of our dogs is Max, a 105lb Newfoundland mix who has an oddly strong maternal instinct.  He had raised two other kittens prior to this and he immediately decided that it was his job to mother the kitten. 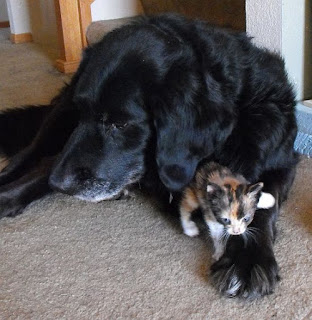 She didn't seem to mind...  except when he got carried away with the licking.  Max knew kittens needed to be licked.  The problem is that his tounge was about as big as she was and Max makes a fair bit of drool at times.  So... he would soak her in his efforts to keep her clean.  When she could escape his tounge, she'd come and find me to dry her off.

Here she is in my lap, in the sun, getting dry and warm. 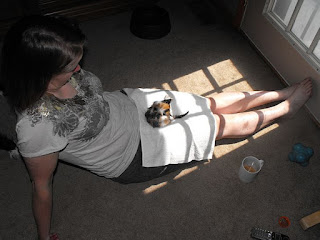 There were a few times right after I'd get her dry that Max would find her again.  Ten minutes later, a soaked, disgruntled kitten would come and find me again. 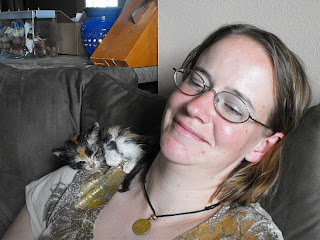 We took her to our vet where we learned she weighed a half a pound and needed to gain a pound!  He guessed her age to be about 4 weeks.  I thanked him for the maple syrup tip and told him that it really did save her life!
Here she is, growing up: 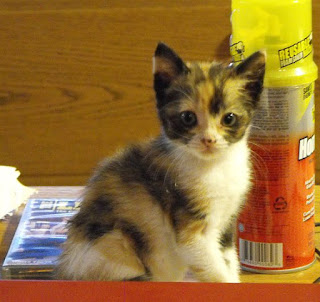 Despite my initial plan to nurse her back to health and return her to the barn, I just couldn't do it.  The life of a barn cat is not always easy or safe and after we, quite literally, brought her back from the brink, I hated the thought of something bad happening to her out there.

Here she is now, picture taken just a few weeks ago, lying in one of her favorite spots, at the foot of the bed on my side. 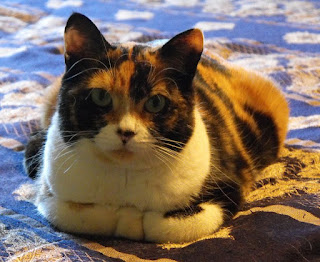 She has gotten quite big and is such a beautiful cat.  Her orange patches are tabby striped and she has a very distinct large black heart on one of her hips.  She is a pretty girl.  Sadly, she is terried of anyone but Jeff and I.  I have tried introducing her to friend of mine more recently, but the last time I tried, she was trembling at being close to another person.  She may always be a kitty who hides from strangers.  I had named her Neytiti, but we most often just call her "Kitten" and she answers to that better than anything.  I think she will always be a "kitten" to me (no matter how big she gets!) and I'll always remember the night we saved a teeny-tiny kitten.

Oh, and Max?  He is still her "mama" and she likes him the most out of the dogs.  She still cuddles with him and even nurses on him from time to time.  Here is Max and his kitten, last summer and a year later: 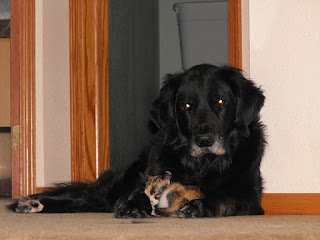 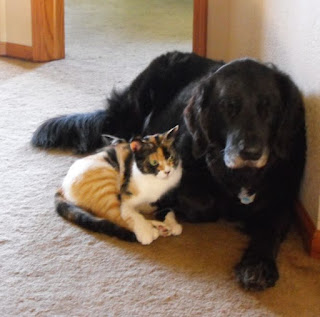