A much belated Happy New Year to my readers!  I hope you all had a great Holiday season and that your 2013 is off to a good start!

The year has been off to a slow start as far as blogging and such (obviously!) but I have been very busy "behind the scenes".  I have several new greeting cards that will be on ArtFire very soon.  I've also gotten back to work on Project Stagecoach, after taking a bit of an intimidated hiatus.  I had to build the wheels and I was very nervous about that.  However, it went MUCH better than I had expected.  In fact, I had so much fun that I've given serious consideration to going into a side business of making miniature wagon wheels!  Yet another iron in the fire I suppose...  First it'd be nice to finish the leviathon stagecoach project.

I will be catching up on Stagecoach posts here soon; I've been continuing to take pictures every step along the way.  In the meantime, here's a bit of a teaser photo - the finished wheels: 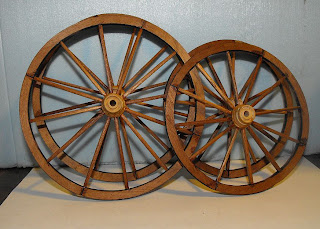 "Finished" is a loose term, because after this they had to be sanded, painted, wheel tread applied, and itty bitty nails put in around the rim.  I'm in the midst of all of that now.  So in that picture, they were finished as far as the rim, spokes, and hub all being in place.  I think they looked pretty sharp as plain wood.  I hope I can get some more wheels made from scratch in the future for different projects or maybe just to try selling on their own.

I've also been tatting away.  I made several bookmarks and gave a few out as Christmas presents.  I also finished my first doily, using a two color thread technique that my Granny explained over the phone.  I'm now working on a pattern Granny sent me that is a wedding dress for a Barbie doll.  She told me that she won a blue ribbon at the county fair with the dress.  I'm hoping to enter one of my own in our fair - in August.  I hope I'll be done with it by then!  So far it's been slow going.

I guess that's it for an update.  There is a lot more to talk about, but I don't suppose anyone would really want to read 20 pages of my ramblings in one stretch!  So, until next time - stay crafty my friends.