Stitching The Days Away

First and foremost, Max is still with us.  He's gone from being given a sudden prognosis of only a couple of days, to still here almost a month later.  He's still happy, still smiling, still likes cheese.  However, we know the tumors are still there, still growing.  We are still very much in limbo, it's a hard place to stay for very long.


I've been seeing a counselor to work though a bunch of things, mainly goal setting and trying to get out of my own way (a never ending battle).  Last week we talked about Max.  I told her I am just exhausted.  I feel like I have nothing left to give.  She talked about "caretaker fatigue" and stressed how important it is to remember self care in these situations.  She described what's going on as hospice care for a family member.  I thought that was a good way to put it.

Much like last summer, the previous time I found myself on "Max watch", I've been primarily filling the hours with cross stitching.

Early last month I posted about a couple of 22 count cross-stitch projects that I had started.  They are both done now, as a result of spending a few more weeks on Max watch.

The first one mentioned was another set of panels for an Arabian costume.

Here they are, all done: 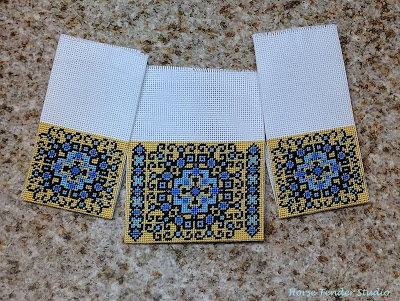 Last time I'd posted about them, I had only started on the first side panel, to re-acclimate my eyes to working in the smaller scale.  This was so that I could move on to the saddle pad down below.  Once that was done, I circled back and finished the rest of the panels.

Next up was my very first 22 count saddle pad.  It was a commission, made to be a miniature version of a real saddle pad.  I felt that 22 count was the best way to capture the details in the full size version.

I think it turned out well: 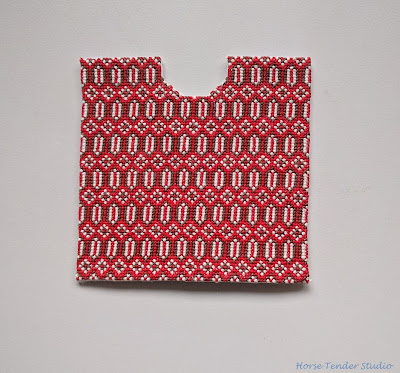 I numbered it as 22 in the Stitched In Japan series.  I think that is actually skipping a few numbers (I believe I had left off in the mid teens...) but I thought it would be appropriate to dub this one "22". 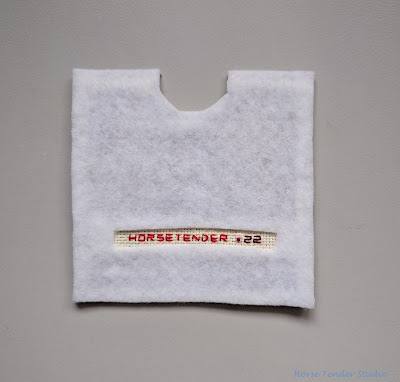 Right before I popped it in the mail, I held up Native Son for a quick modeling session.  It's tradition, after all. 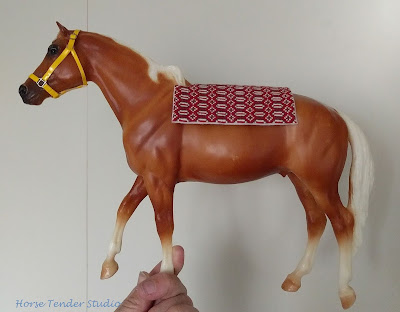 Once I finished up the pad and the costume panels, I decided to press on with another set of costume panels.  Actually, I had drawn up the patterns for a few more sets already.

Two years ago (ugh, really??) I made my first few batches of tassels.  At the time I had NO idea what I'd use them for, but I'd decided to dip some sort of toe into Arabian costume making and thought that's where I'd start.  The colors I'd randomly chosen ended up looking good together and I figured they'd end up in a project...  someday. 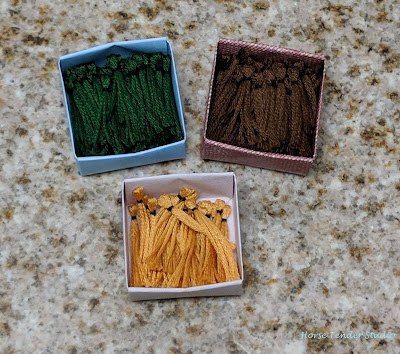 One of the patterns I'd drawn up recently had yellow and brown in it, the other color was red.  I played around with the pattern, added a bit of green, found a red floss in my stash that compliments the other three colors, and away we go! 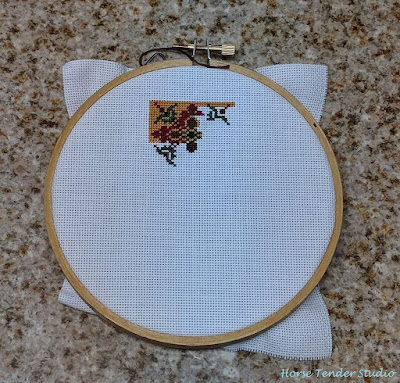 This one is actually going to be Classic scale!  I sized my measurements roughly for the Classic Arab mare.  The base color of the halter, collar, and trim will be the brown (since I have the most of that color on hand).  I haven't decided if I'll make red tassels or just use the red as an accent color somehow.  Oh, I added a tiny bit of black to the pattern as well, since the original tassels are all tied with black.

I have quite a log jam at the panels stage for costuming.  That's what I'm having the most fun with now and so I figure I may as well keep cranking them out.