Today I had my first official Yabusame lesson and it was on horseback.  (yay!)  I hadn't been expecting that.  Last weekend, I had gone out to meet another student and ended up getting a free practice session with her bow - in which I learned about many of the differences between Yabusame and the Plains Indian style horse archery that I was used to.  Today I thought we would be doing more shooting the bow on the ground, like we did last weekend.  However, I'd brought my helmet, just in case.

The entire hour was spent on Mulan, the sweet horse I rode my very first time out there. 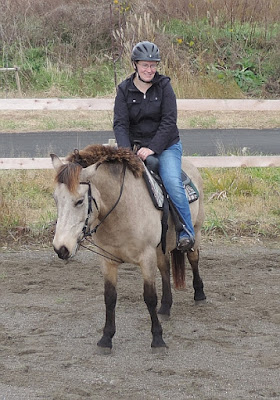 The majority of that time was spent trying to learn the way to ride a horse for Yabusame.

It is VERY different from anything I've done before.

In fact...  I wasn't actually able to do it properly at all.  My body pretty much said, "You want me to do what?  Um, no thank you."  I think part of the problem is that I am sadly more out shape now than usual; I certainly haven't had to do any horse chores for the last year and a half.   But also, the way of riding for this is just so different.  I had no idea.  Picture riding in a squatting position, hovering over the horse - feet far forward, butt up and out, chest up and back.  It was entirely as awkward as it sounds.  I gave it an honest try though, over and over, until my legs were d.e.a.d.

The "reward", as far as I was concerned, was that at the very end I was able to ride Mulan through two passes down the Yabusame track (a long sandy path that the horses run on during the event).  She has a strong, bouncy trot - which I had been trying to ride while failing to squat in the saddle - and I had no idea what to expect from her faster gaits.  I was nervous too, having not gone over a trot in quite some time  (just over a year ago and then only briefly at the canter).  On top of all of that, my legs were done by that point.

With all of that, could I even stay on?  I did and I was very pleasantly surprised to learn that her canter and gallop are smooth - and fun!  I cantered about the last third of the track the first pass, but then got into a gallop on my last pass and galloped about half to two-thirds of the way that time.  It felt like we were flying toward the end on that run - but the instructor assured me she can go even faster.

It was SO much fun!

The homework I've given myself is to do hundreds of squats.  Everyday.