Did You See So Much Videos??

Today I filmed, and uploaded, not one, but TWO videos to my YouTube channel. 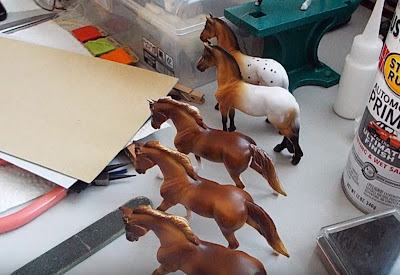 The first was a bit of a tutorial on (part one) of how I prep a Stablemate for painting.

The second was a viewer request from my last vlog, where someone said that a video about the laser business would be neat.  So I threw that together too!

My goals for this year include a lot more videos, blog posts, and in general social media type stuff.  I certainly don't think I'll be able to do two videos a day, everyday (ha!), but I think today was a good start toward that goal.


PS: The title of this post is inspired by a quote from this Kid Snippets clip: Kid Snippets: "Salesman".  "Did you see so much money?!"  is a quote that Jeff and I use, or versions of it, quite a bit.  If you haven't heard of Kid Snippets, you should check out some of their videos.  The premise is: what would happen is kids wrote movies.  Kids act out scenes and then the adults lip sync and act out what they said.  They are hilarious.  Some of our favorites are: "Math Class", "Cooking Show", and "Hunting".
Posted by Horse Tender at 6:17 AM