Bad Performance? All Of It

At The Jennifer Show last year, there was a class called Bad Performance.  Unfortunately, I didn't actually see it, I think I was busy getting my ginormous Stagecoach entry ready for the Big Dreams class.  I've seen some pictures from it and have heard a lot of people talking about how great it was - most recently, the Mares In Black podcast.

Speaking of the podcast: they are having a Spooktacular photo show, which is now being judged.  They had an interesting class list of prompts for class names.  They encouraged people to think outside the box.  For their performance classes, they offered two options: Consistency - the same horse doing all (or most) of the classes, and Specialist - a different horse in each class.

The formation of my ideas could be an entirely separate post, but I'll summarize it for now by saying:  I entered every performance class with a Breyer Smoky.  You might be saying: "How?!" or "Why?!".  Well, the "why" could be its own post as well and maybe it will be.  Actually I think this whole affair may result in several posts, possibly even the resurrection of this blog?

The "how" will be shown here, at least in the final photos I entered.  In my head, I was telling a story of a rambunctious horse who changed hands partway through, but continued to get into trouble and have adventures.  Then had his biggest adventure when he took to the sky!  Though the pictures are out of order in the show albums and I didn't take them in order, I'll put them in story order here.

This Smoky's name is Indy.  He came with the name and that's ANOTHER story.

First up, for the class "Strappy"

Don't forget to check you connector strap, kids!  Don't want that back cinch going TOO far back... 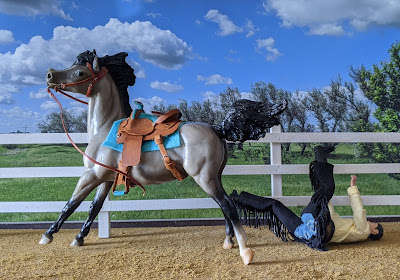 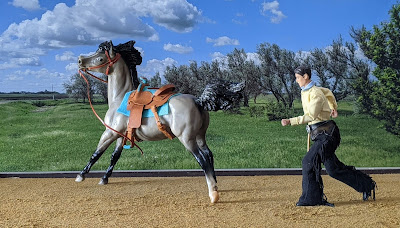 It was a quiet day in the parking lot of the local super market, when...
Hey, where's that cowboy guy who was looking for his horse? 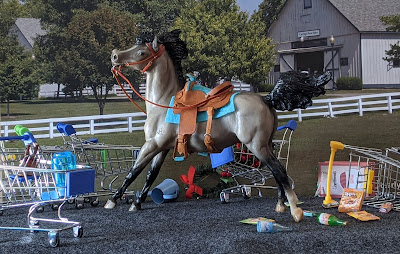 "What Could POSSIBLY Go Wrong?"

Look, a kid's horse for sale.  He looks great!  He and Little Billy could grow up together! 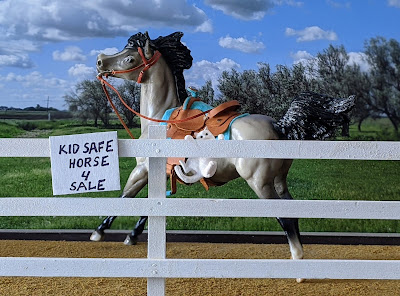 "Drama Llama"
What is that long-eared horse eating devil creature?! 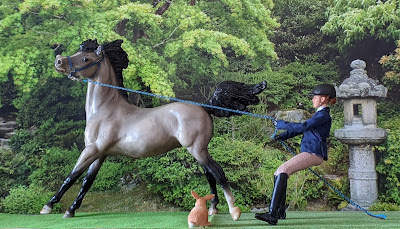 "Just Dance"
Practicing at home for Hunter class, but Indy doesn't want to be a Hunter.  He wants to DANCE! 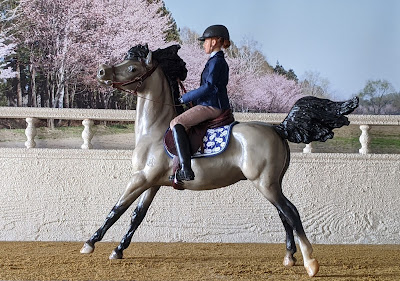 After eating some mushrooms in the pasture, the weirdest thing happened. 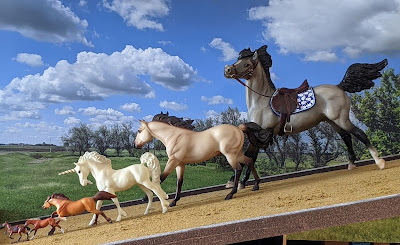 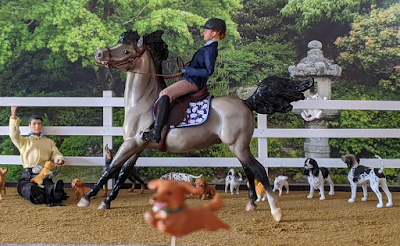 Indy is wearing a fancy new English saddle and bridle, but that's not enough for this forward thinking fashion mogul.  That clothesline over there should do the trick. 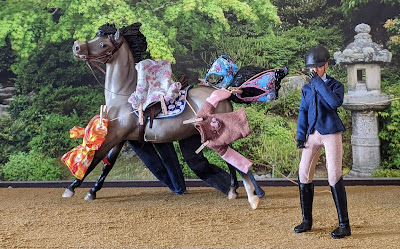 Indy has really done it now.  He ran off, got himself lost, and stuck.  He was found and is now being airlifted to safety. 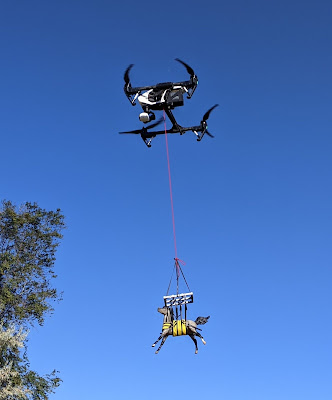 In summary, I see the idea of a Bad Performance class and raise it to an entire division.  Hahaha.

This was SO much fun and many much needed laughs were had.  Starting out, I wasn't sure if it was possible.  Then, when I came up with ideas for a class ("carry him with a drone!" "wrap him in a clothesline full of clothes!"), I wasn't sure I could pull it off.  Each time I did, and looked at the pictures, I couldn't stop smiling and laughing at the whole thing.

I must give thanks to my friend, Jennifer Buxton, for the encouragement along the way.  She entered to show too and we were sharing our creations as we came up with them.  She's always a huge inspiration for me, especially when it comes to taking model horse pictures.

Thanks to my other friend, Susan Bensema Young, for the gift of Indy and the delightful phone call a few photos in.  I had sent her a few pictures of this to share his adventures.  That was before he flew!

I have no idea how I'll do in the judging but, I already feel like a winner.  This was awesome and I want to do more!!

Stay tuned for more on this.  Thinking I could do posts on:

Other ideas and pictures I had come up with in the beginning.
Why Smoky?
Behind the scenes, setting up these pictures.
The story of Smoky's flight.

Which should I do first?