This will be a bit of a catch up post on the Stagecoach.  I've been chipping away at the wheels over the last month or so.  They are mostly finished, with a few more steps to go.

After the rims, where we left off in December, the next step was to cut the spokes and shape them.

The spokes as they started: 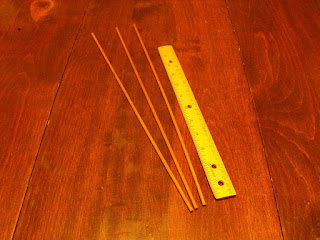 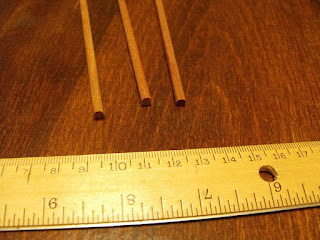 Then, once the spokes were cut (48 in all) two sides of each one had to be sanded flat.  The directions said to sand down the sides of the long pieces before cutting, but I didn't have a way to make sure they stayed even all the way down, so I chose to sand after cutting.  This might have made more work for me, but it turned out okay.

Here is how I flattened the sides - a jeweler's vise and an emery board: 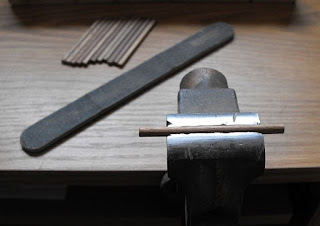 Here are 12 of the spokes, cut and shaped: 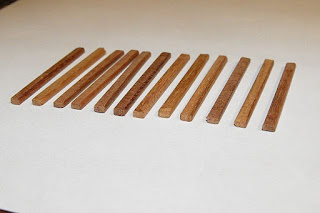 Ah well, there wasn't much that could be done about it after the fact.  However, I ended up having so much fun making these wheels that I'd really like to make more in the future.  I would like to try and make them the way full-size wheels are made.

In the meantime, for this project...

This will be a wheel!: 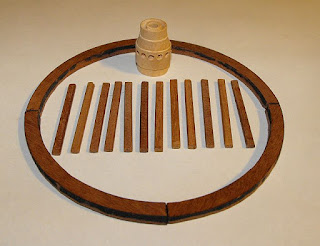 Once again, I broke out my block of foam, T-pins, glue, and set off to work. 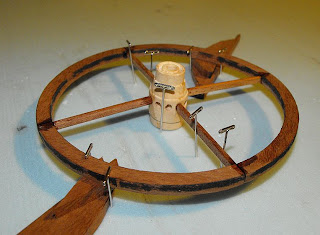 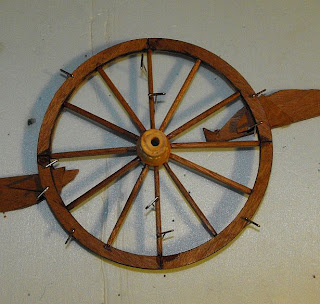 The first finished wheel, a front one, released from the foam.  Wow, this turned out quite a bit better than I had hoped!: 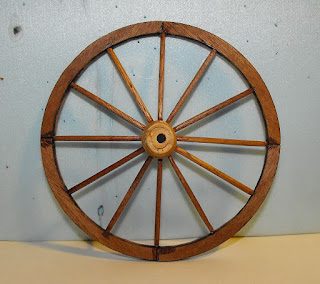 A fun shot to show the size, next to a trusty coffee cup: 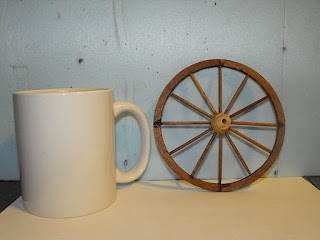 Fast forward a few days and I had all four wheels completed: 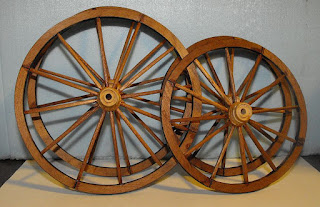 Again, here with a coffee cup: 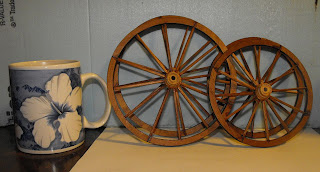 Although Jeff and I both liked the wooden look quite a bit (all the more incentive to build more minature wheels in the future!) the directions call for a paint job.  So I've spent several sessions applying a few coats of paint on the wheels - save for the inside, flat edges of the spokes. 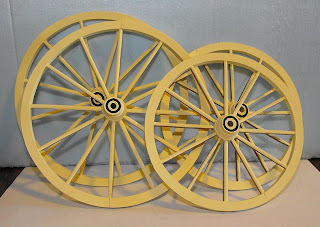 In what seemed to be a departure from the amazing realism of the model kit, the wheel treads are to be made from thin strips of... wood.  We were disappointed at first, why aren't they metal, as a real wheel tread would be?  I have a theory.  I think wood is used to better simulate the texture of the outer metal band after it has seen use.  I can imagine it would be hard to replicate that look with minature strips of actual metal.  That's my theory anyway.

The strips that are to be the treads have to be stained/painted.  The directions call for using a mixture of "shoe polish and solvant".  That was a bit of a mystery to solve, as I'd never heard of such a thing - and neither of those items have found their way into my life in the past! 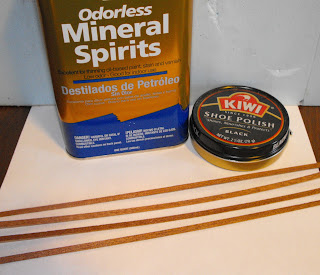 The tread strips with their first application of stain.  I think they are looking good and my theory of using stained wood for the texture seems to work.  To me, they do look like scratched up strips of metal: 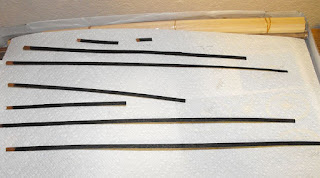 In addition to the tread being needed to fully finish the wheels, I also need to put in some nails...  lots of nails...  Itty bitty nails... 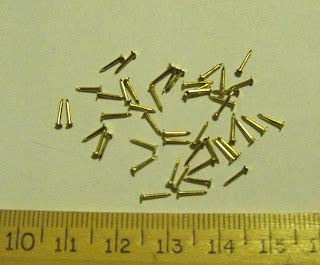 But wait, they aren't small enough.  They will be nailed in on the front AND back of the wheels, which are 5mm wide.  So the directions say to cut the 5mm nails in half.  My first reaction was:  You can't be serious...  Then I realized that they were.  So it was needlenose pliers and cutters to the rescue: 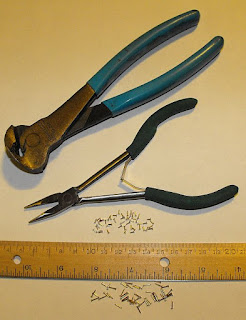 Here are 48 - Five millimeter brass nails, that were cut off to be - approximately - half as long. 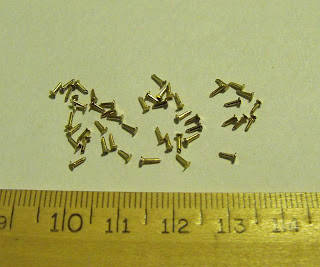 The process turned out to be much easier than I thought, although a little time consuming.


So, there you have it!  We are all caught up on the Project Stagecoach.  (I just finished staining wheel tread and cutting some of the nails a few hours ago - so those pictures are about as fresh as it gets - haha)

All together I'm having a lot of fun, though I am still intimidated by this whole project - it is so full of things I've never done before.  It is a challenge, but that will make it all the more rewarding with this thing is "rolling"!