Last July I finished up my first set of cross stitched panels for an Arabian costume.

Here's how they look now:

I've gotten the edging done and gotten them shaped and ready to put on a saddle - which does not exist yet.  I was really happy with the results of the stitching and knew that I wanted to do more cross stitched panels in the future.

It took me a while to revisit the idea, but a couple of weeks ago I decided to take the next step in the evolution of my saddle pad adventures.  This would be to start on a 22 count saddle pad.

As a warm up, I decided to start on another set of panels first.  Here's what I got done during the first long day of working on one of them: 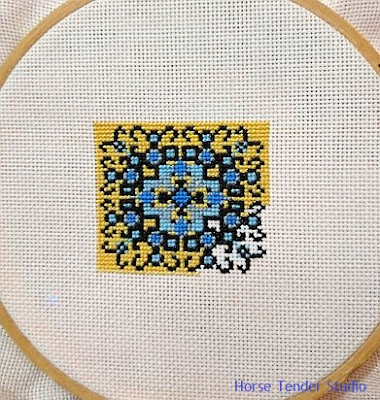 I'm really excited about this pattern!  The first set that I did was adapted straight from a narrow strip of cross stitch pattern that I'd come across.  This next set is modified (heavily modified in the case of the smaller side panels) from part of a larger, beautiful pattern that I'd found.

After getting confirmation on size from the new owner, I started on my first ever 22 count saddle pad.  It is a commission, and is a scaled down version of a real saddle pad.  I'd been thinking about doing my first 22 count pad since this past spring, when I drew up a few patterns for them.  However, it wasn't until this project that I took the plunge.  I decided this was the only way to do justice to the original intricate pattern on the real pad.

Here's where I am so far: 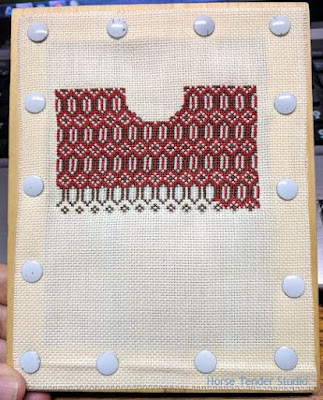 The pattern has six rows of the larger oval shapes on it, so I'm "almost" there...?  Certainly closer to the end than the beginning.  I'm tracking my time on this project and so far I'm at 15.5 hours (and I'm sure I've missed a couple of hours tracking along the way, since I haven't been super diligent about tracking my time - it's a new thing for me).

After this pad is finished, I'll rotate back around to the blue and yellow panels.  Oh and I already have the pattern drawn up for a THIRD set of panels.  I think I enjoy coming up with the patterns as much as actually making the projects.  It's certainly faster to do the patterns than the actual stitching!