A couple of weeks or so ago, I started cranking out bobbins from cereal boxes.  That has been my primary creative task ever since.  Oh, I've been enticed by various other things I want to do and make, but so far I've stayed the course (unusual for me, haha) and here are the results so far.

When I started off, I was putting the bobbins in the box, organized by number. 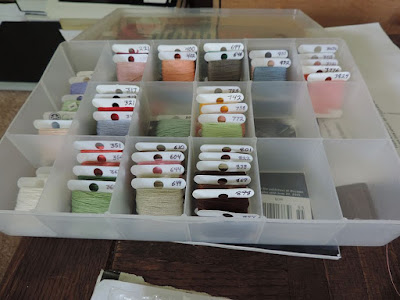 I decided I didn't like this, because: 1) I couldn't see the colors very well and 2) a lot of my floss is "off brand" and might not even have a number code to go with it.

So I changed early on to organizing by color and just making sure I wrote any identifying info (brand and number code or color) on top of each bobbin). 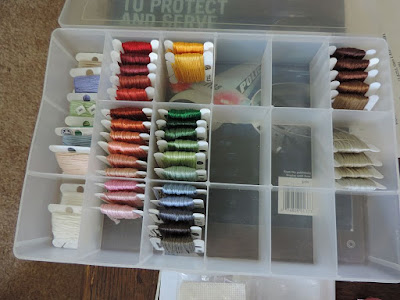 Those were the ones I had wound before we made the big move.  Now, armed with a pile of cereal box bobbins, it was time to get to work.  First, I transformed this: 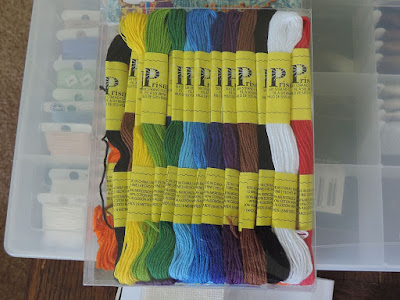 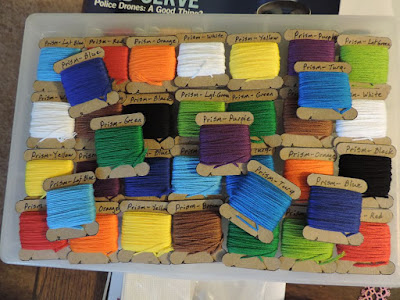 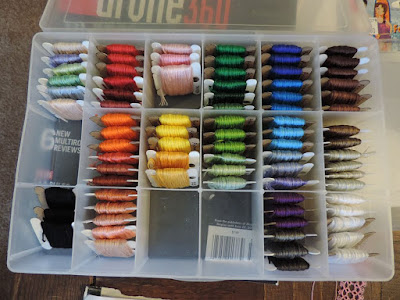 One thing I've done for a while now is buy complete cross-stitch kits at thrift stores, for the supplies inside.  (Back in South Dakota, I had bought several large kits for as little as 50-99 cents each!)  A few of them are kits I might actually make and I keep them intact, but most are dismantled.  The fabric goes with the rest of my fabric, and the floss goes into my ever growing, messy floss stash.  No more!  (on the messy part)

Shortly after we arrived here, I found a large kit at the local thrift shop.

All of the floss that was included there has now been filed away. 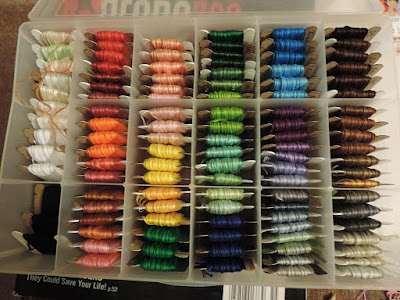 And so it goes.  I now have a second box completely full after taking apart more of my thrift store kits, and I probably enough random floss still kicking around to fill a third box.  I'm finding this to be a good hot weather activity.  I can park myself in the coolest part of the house at any given time, or in front of a fan, and work away.

I think once I get ALL of it wound onto bobbins, I'll probably organize the whole mess by color.  Right now I have sort of a rainbow in each box, but I think it'd be better to have all the reds, all the blues, etc. together in the same box for future use.

My mind has also been working (always) on other things to do with floss, since it turns out I have SO much of it.  At the top of the list, aside from more saddle pads of course, is Arabian tack - something I've always wanted to do.  I've been doing a bit of research on presentation sets, halters, and native costumes.  If I get tired of winding bobbins, I'm thinking I may take a bit of a related break and try to start making some tassels.

Oooo, something shiny!  Sorry, there goes my brain, I'd better go after it.  ;)