I've talked about The Jennifer Show on here in several posts.  The first one was held last September and I was happy to have been a tiny part of it, by rush finishing some custom horses (that's SO me), and sending a small herd to my friend Dayle, who graciously proxy showed them for me.  I bought some raffle tickets, won some books (Equine Tapestry - YAY!), and also donated a couple of engraved saddle stands that ended up being given away as prizes!  After the show, I had also posted here about how incredibly thrilled I was to spot both a horse I had painted and a saddle pad I'd stitched (part of two different entries) in the same picture!

I was very sad that I couldn't go to the show and had to watch all of the fun from afar - really far, as in the other side of the world.  The next Jennifer Show was planned to be held in two years, September of 2018.  I made a public declaration that I would be there, in person, with new and improved horses to show AND that I would take the plunge and show in performance.  Lofty goals to be sure, but I figured that I had two years to get that done.

Well, it's been almost a year already and...  I have done some work towards those big plans, but not much and not near as much as I had wanted to

A few days ago I found out that the next edition of the Jennifer Show will be in September 2019.  The announcement was actually made it June it seems, but it took me a little while to see it.  It's being pushed out another year, because the World Equestrian Games will be held at the planned time in the U.S. in 2018 and that's going to be a conflict for a lot of horse/model horse people.  I totally understand that.

The push out to 2019 at first made me think: Sweet!  Another year to prep and plan!

Then reality sank in.

Most likely, as things look now, that will be right in the middle of the time we are set to move back to the U.S. from Japan.  Which sounds like good timing, BUT it's most likely going to be an incredibly chaotic and stressful time.  Moving is stressful anyway, moving halfway around the world was something else.  It may take even more planning for me to attend now than it would before, believe it or not.  For example, the movers will be packing everything months in advance.  Meaning I have to be ready for that and not let them take anything I'll need for the trip and show - since we won't see anything they take for at least 3 months.

There's still a lot of time to figure things out, but right now it's a good news/bad news feeling.  I'm going to plan as if I'll be able to go;  it can't hurt to throw myself into making more (better) horses and working towards a debut in performance.  Those things will always be good to work on!

Maybe I can even get my Stagecoach and team done.  Ha!  Yeah, I'm funny...  It was a possible goal I'd set for myself during my time over here and I'm halfway through that time already.  So maybe I should get back to work on it.  When my kangaroo lace order arrives, I'll finally have what I needed to proceed with the construction.  That's good.


I don't really have a picture for this post, so here's my supervisor kitteh, lounging in the window of the studio. 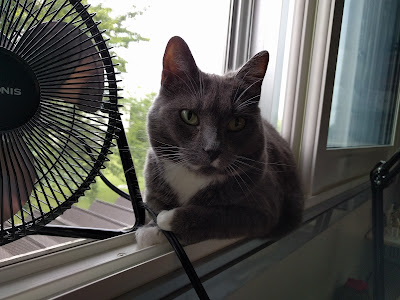 The fan was a fairly recent addition in an attempt to keep the room from being so stifling during the heat of the summer.  It did help quite a bit.  Thankfully, it seems like the worst of the heat and humidity has passed (I hope!). So I should be able to get back to work in there, instead of fleeing to the living room to work next to the portable a/c.