On Friday afternoon, Jeff and I made the trip to Aomori City to see the Nebuta Festival parade.  Nebuta Festival runs from August 2nd-7th every year and the highlight is the parade which happens every night, until the last day.  Then, the parade happens in the afternoon and a 2 hour fireworks display takes place in the evening, ending the festival.  You can read about it here.

We were told in a briefing, back during our first few days in Japan, that the Nebuta Festival was something we absolutely had to experience.  We had missed two of them so far, but made it to this one.

We arrived in Aomori a few hours early and had thought we might do some sight seeing, but upon reaching the street that would be part of the parade route, we saw hundreds (thousands) of people already lining the street, waiting for the parade.  Aborting our sightseeing plans, we found a parking lot several blocks from the parade route and then managed to find our own spot to wait and watch.

After the street was shut down to vehicle traffic, dancers in costume began pouring onto the street. 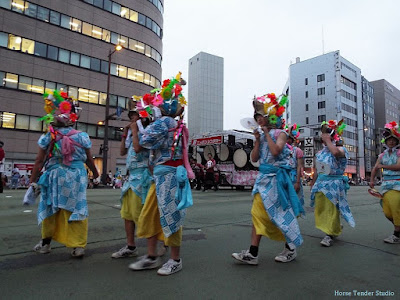 Along with the dancers came HUGE sets of taiko (drums). 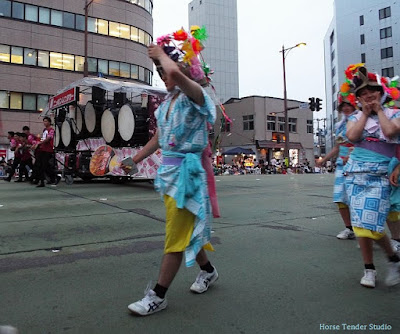 Here came a float!  But it was going the wrong way.  We were positioned much closer to the end of the parade route than the beginning and were a bit confused when they began filling the street in front of us with dancers, taiko, and floats. 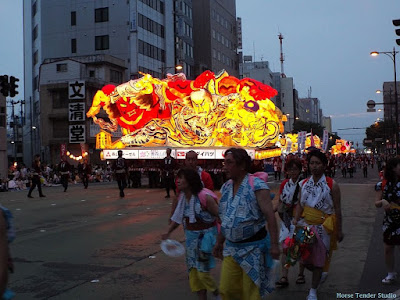 No matter what was going on, Chewie was ready for the parade! 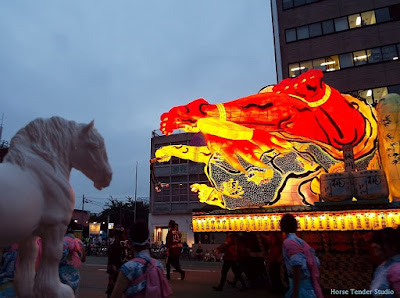 A Nebuta horse!  I had spotted two altogether by the time the night was done. 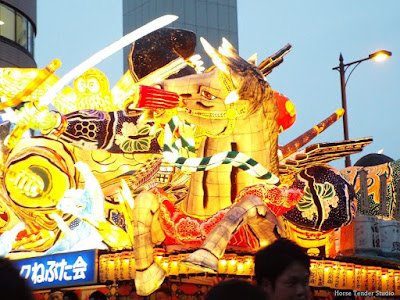 Another big set of taiko was rolled out in front of us, 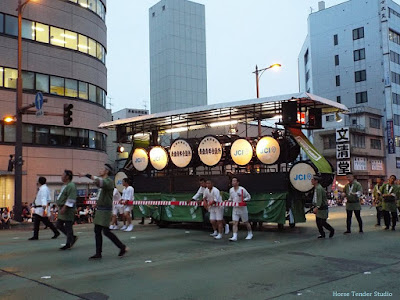 and then turned around.  We figured then that they were staging part of the parade. 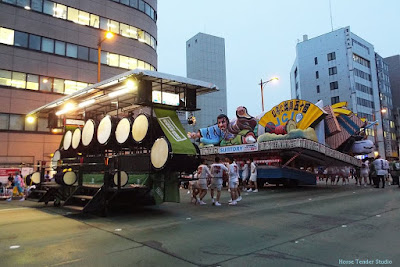 I was SO excited to see the taiko.  In the past I would have never considered myself a big percussion fan.  Sure, I love a good beat in music, but the taiko are...  Something else.  You feel them in your bones.  They have such a commanding, powerful sound.  The very first time I heard them, at a demonstration shortly after we arrived in Japan, I was instantly captivated.  I haven't had the chance to hear a lot of them in different places yet.  So far, my favorite place to hear them had been at the Misawa City Festival, which takes place almost in our front yard.

After the floats, dancers, other instrumentalists, and taiko sets were in place, we heard what sounded like taiko being warmed up further down the street.  A rhythmic drumming that sped up faster and faster and faster and then stopped.  We also heard chants and shouts scattered along the street.  Jeff said it sounded like people were getting pumped up.  There was definitely a sense of something amazing about to happen.

At the taiko and float in front of us, there was activity. 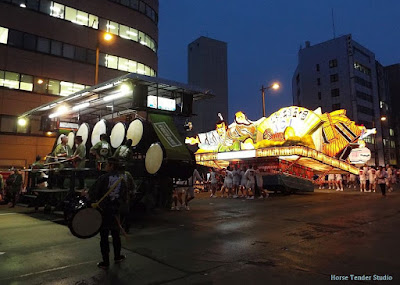 Suddenly there was a loud BOOM! right in front of us that made us jump.  We realized that the man in the center of the taiko set had just hit his drum - once.  I grabbed the camera and started recording.

Then, this happened:  (I recommend good speakers and some bass if you want to feel some of the effect.  Words can't adequately describe what this was like.  The sound was a physical thing, I could feel it reverberating in my bones and the ground seemed to shake...)

I'll let the amazing floats speak for themselves: 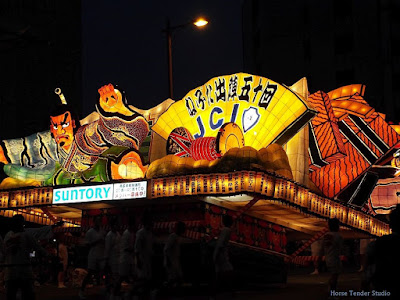 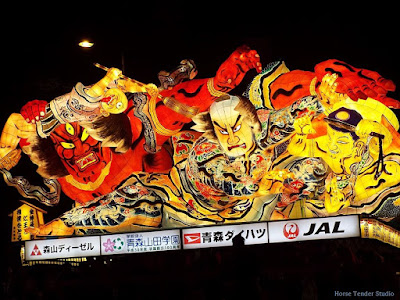 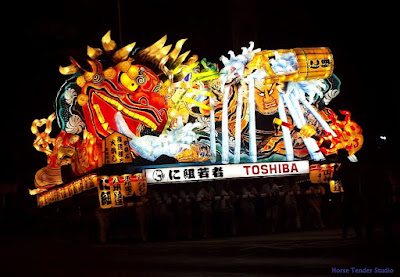 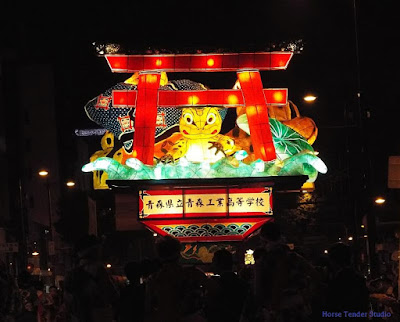 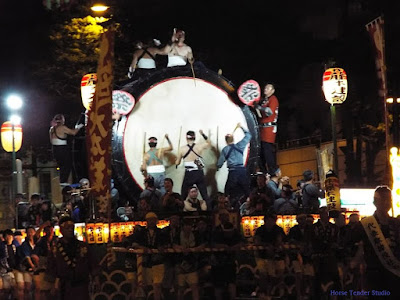 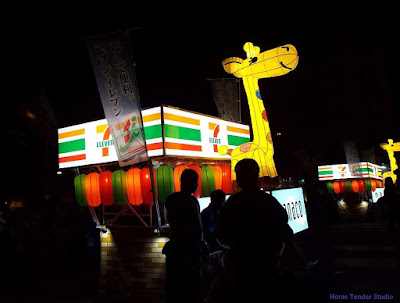 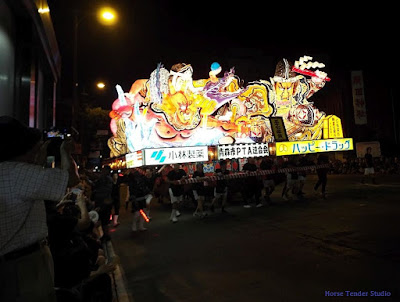 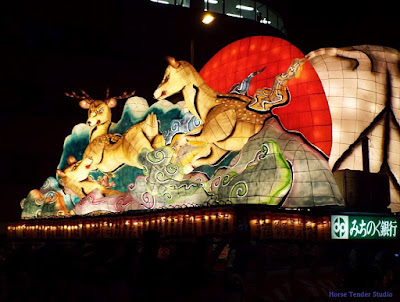 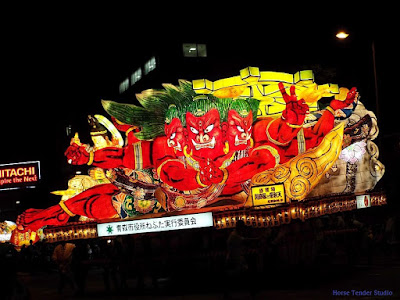 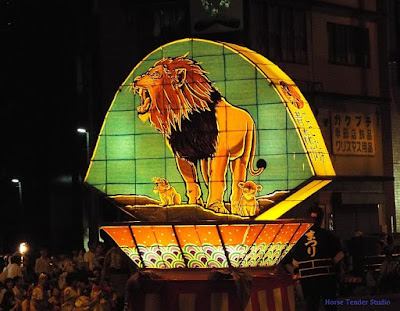 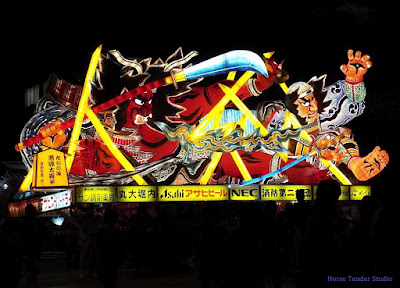 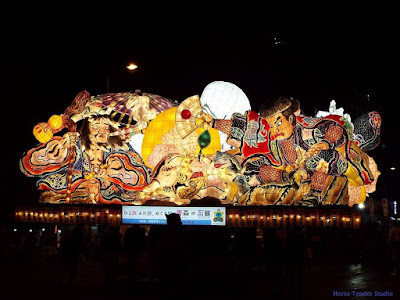 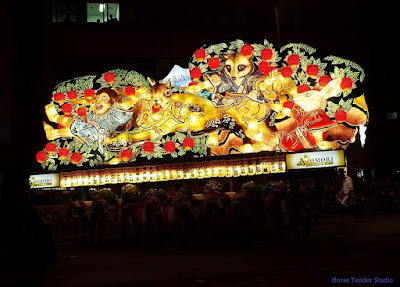 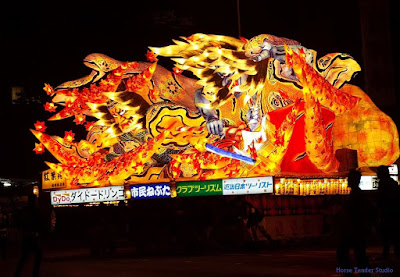 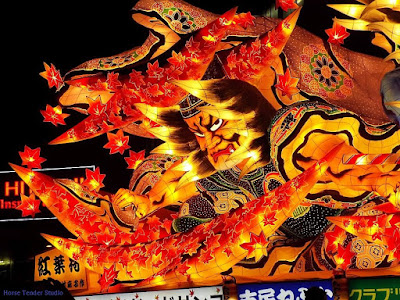 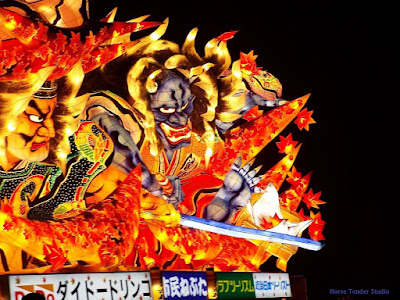 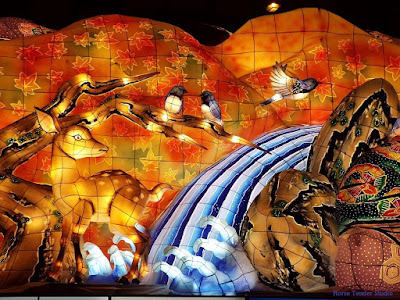 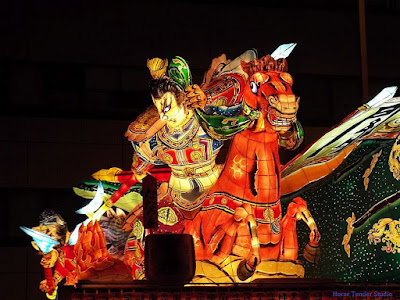 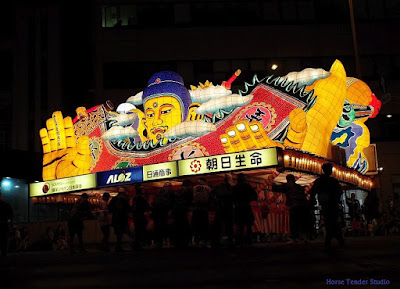 These last two are blurry, but here is the float that started in front of us.  In two hours, it made a complete lap of the route. 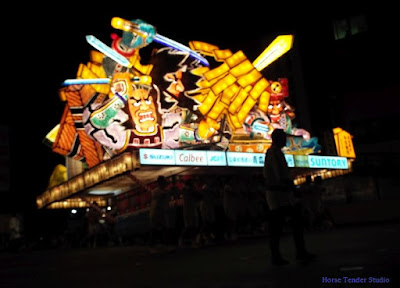 Then there goes the taiko that started in front of us. 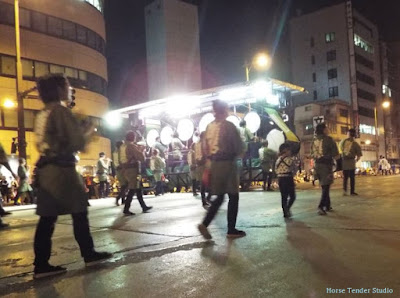 With that, after a few more sets of floats, taiko, singers, and dancers went past, the parade was over.

Next year, I want to be in the parade.  Yes, they encourage anyone to join in!  You have to either buy or rent a costume and then you can sing and dance along with them.

This was a staggering, amazing experience and I'm so happy that we were able to see it, and in the case of the taiko, to FEEL it.