A Report From The Front

It's been almost a month since I declared war on "Resistance".  Shortly after that I decided that the start of the war would be to get everything organized and put away or gotten rid of...  Throughout, not just the studio, but... the entire house.  I've been making a lot of progress, off and on, but I was saving the studio for last, because it just seemed so daunting.  I wouldn't be surprised if that was ol' Resistance, shelling me to keep me out of my creative, happy place.

However, it's only in the past couple of days that I have charged in and made some huge progress in the organizational battles that are taking place within the studio.

Back in early June, the studio was an empty room.  I did a post about it and I mentioned the huge closet and cabinets in particular.  It was my hope that, and I quote: "they won't just end up crammed full of stuff and become a black hole full of supplies that I won't see until we move again..."

Well, that's pretty much what had happened, so far.

However, after two days I'm happy to share this: 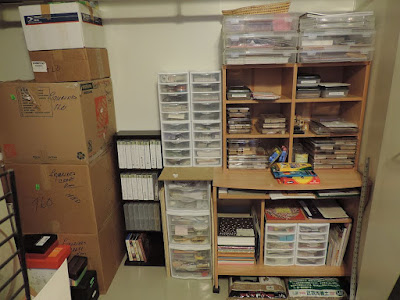 A big chunk of the closet has now been turned into a crafting nook!

When I first starting putting this together yesterday, I planned to just store all of my paper crafting and jewelry making supplies here.  But I realized that I can actually pull out the keyboard tray on the PC cart and make things here if I want to.  Which goes back to one of my early ideas of wanting two work stations - one for horses and one for paper crafts.  Since both require quite a bit of paraphernalia and it can be a challenge to switch from pony mode to paper mode or vice versa.  So now, if I want to, I can build my paper projects right here and save my desk for horses, tack, etc.

The base of it is a PC cart that Jeff decided he didn't want in the latest renovation of his set up in the office.  On top of that is a cool shelf that I just picked up in a thrift store last weekend - for $6.00!!  On top of, alongside, and under everything, are my assortment of plastic drawers and holders.  In this picture, I had put my bags of Bonsai soil underneath the cart, but have since pulled them out and instead put my sea glass, polished rock, and wine cork collection under there.  A lot of my rubber stamps are on the shelf unit, the rest are in the DVD shelf on the left.  Left of the whole setup are the precious "figurines" boxes.  Yep, my model horses.  That's about all that's left boxed up in the closet now, aside from a couple boxes of random stuff "to sort".

The result of moving all of my stamps and drawer units into the closet is...  a LOT of empty shelves! 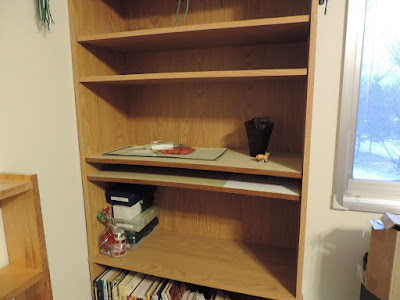 I'm also happy to report that, very recently, I have discovered a material here that is plentiful, cheap, and sturdy.  And the laser cuts it like butter...  I think once the epic cleanup is done, it's about time for me to start building my shelf stalls and.... free the horses!!