I completely missed Day 9 - and my first daily blog post missed this year I think.  Oh no, that's how it starts!  Soon it'll be months in between my posts!  Ha...  Okay, not so much.  (more on that at the bottom of this post)

The Copperfox Challenge for Day 9 was to plan to attend a live show or enter a photo show.

Sadly, there are no live shows here in Japan.  (I've given a bit of thought to making it one of my crazy long term goals - to possibly change that...?  but don't hold your breath for now)  I did not enter a photo show yesterday (or today) either, BUT I will "officially" announce that 2016 is the year I will return to photo showing!  You heard it here first.  ;)

The Challenge for Day 10 is to imagine a story or create characters from your model horses.

I haven't done any of that for a long time, but many of my horses were characters when I was younger.  They had profiles and personalities -  that's something I'd actually like to get back to since it was a lot of fun.

It's interesting that this day's challenge came u, because I have actually been reading over a lot of my old stories the past few days.  I have always enjoyed storytelling.  I don't have a new story, but I'll tell you about an old one.

One story that I made up when I was playing with my horses (yes, I played with them! :O haha) was about a young girl in the Old West.  She and her father had a big horse ranch and they were going to move from Texas to Montana.  Think cattle drive, only with a huge herd of horses.  I would act out scenes in my story and several of my models played as main characters.  The story was not written down, so a lot of the details have been lost, but I remember the overall story, and the horses.

"Rock Steady" was the girl's favorite horse, though he might have had a different name then.  When I got to where I was thinking up show names or registered type names for my horses, I named him Rock Steady...  after a Bryan Adams song.  (he inspired a LOT of my horse names if you haven't already noticed) 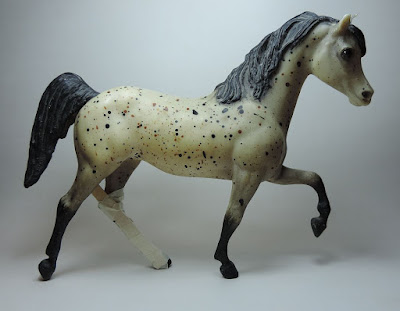 Rock Steady was a good name for him though.  In the story he was beautiful, flashy, but solid as a rock - athletic and fast, but gentle and friendly.  Everyone liked him, people and horses alike.

Sadly he is in the body herd after suffering a leg break at some time.  I don't remember it happening during the play years, oddly enough, but after.  I put a hasty splint on it just now to take that hasty picture above.  He is also fairly beat up in other ways and discolored in spots.  The life of an old west cow pony is rough..  or, since he herded horses, would he be a horse pony?  Ha!

He was one of my favorites at that time; I thought he was so gorgeous.  I don't know what my customizing plans are for him, but I'm thinking he'll still be a flashy Arab/Appaloosa in the end.

In all seriousness, I've found that blogging is something I do enjoy.  Some days it feels like a chore, but I do miss it if I don't do it.  I've never been very good at keeping a diary or journal and so it was with blogging for a long time.  However over the past year or so I've been doing pretty well, aiming for, and doing, daily posts most of the time.  I'm not sure I'll be able to keep that up forever (okay, no, I won't be able to...) but for me, this is fun!  On THAT note, yesterday I did happen to see that I've passed 25,000 views!

I've got a long way to go to hit where Five Paws Studio is now (over 100,000 views!) and I may NEVER reach Braymere's current total (over 3 million views and climbing!),  but I'm excited about my wee milestone.  ;)