Jeff's away and I've been dealing with some depression and probably cabin fever the past week or so.  I finally decided that I needed to get out of the house.  I figured my options were: go to the beach or go find (real) horses again.  I opted for the beach, since I haven't actually done much driving here and I wasn't sure I was up for my first big solo expedition.  However, a solo beach trip wasn't without some apprehension either...

I've mentioned this before, but after spending the vast majority of my life landlocked, I now find myself living about 3 miles from the Pacific - as the crow flies.  It took me a little while to get used to beach walks; the ocean scares me.  Oh, it is without a doubt beautiful and fascinating, but I just hadn't been around it much at all.  Now living in the land of earthquakes, tsunamis, typhoons (oh my!) doesn't really help either.  Jeff and I have walked a particular stretch of beach many times.  It was there that I decided to go.

I also decided it wouldn't be just a stroll along the beach; I went on a mission to take my first ever model horse pictures... by the ocean!

When I first arrived, I studied the shoreline near the parking lot, watching the waves and trying to figure out a good place to setup.  I decided on a slight rise that was mostly out of the water, but did get "flooded" every so often.  I wanted some water pics, but didn't want the horses going into the drink.  ;)  I didn't want to get soaked either.

I took several horses with me, but only photographed a few of them.  It was a cold, windy, snowy day (more on that later).

First up was Lionesse. 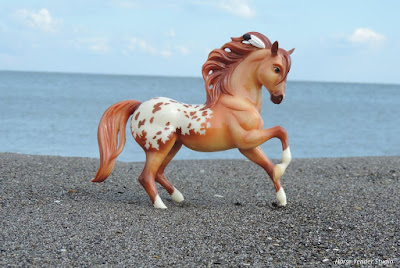 Crashing surf behind her! 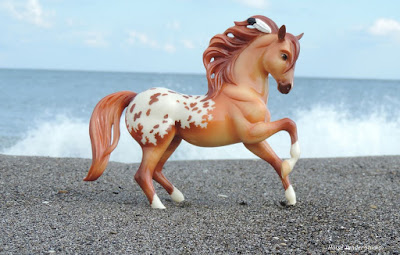 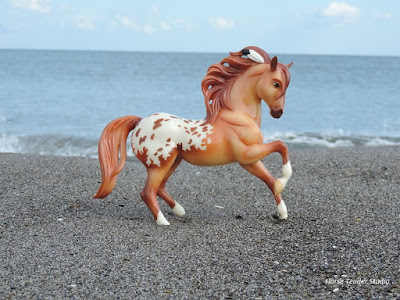 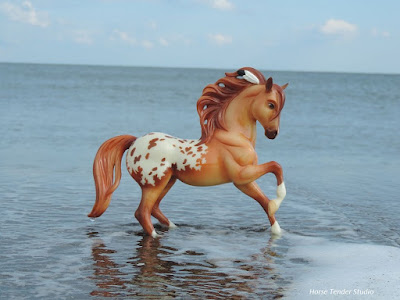 That instantly became my new favorite model horse picture, but I'm fond of this one too.  As the water receded, the reflection on the sand was beautiful. 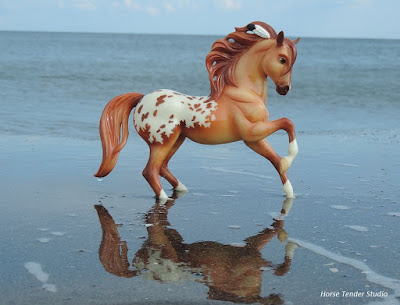 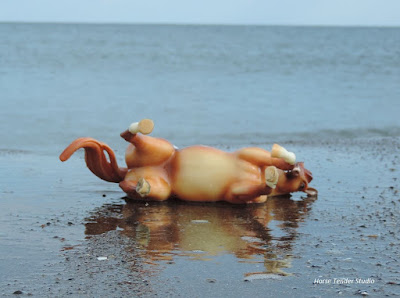 A wind gust made her topple, so I decided that was enough for her photo shoot.

I took her back to the car and brought out this guy. 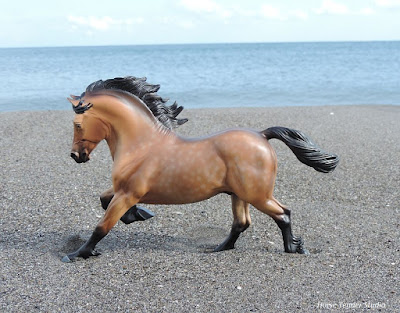 A wave building behind him. 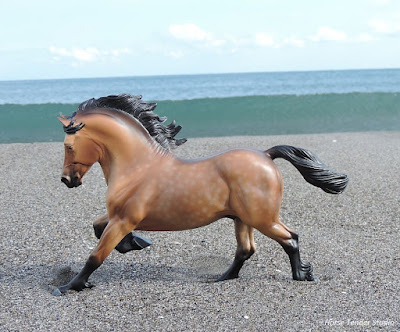 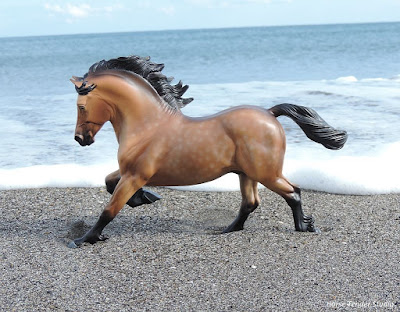 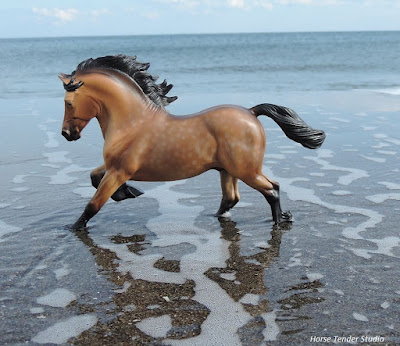 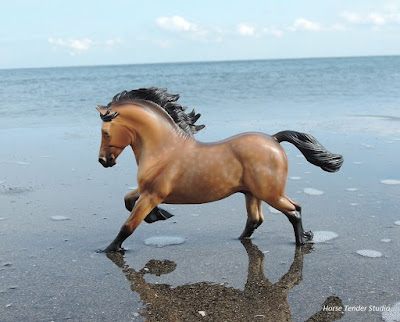 Last one.  I think the angle on this one was the best for him.  I was crouched down, holding the camera just off the sand and sort of "shooting blind". 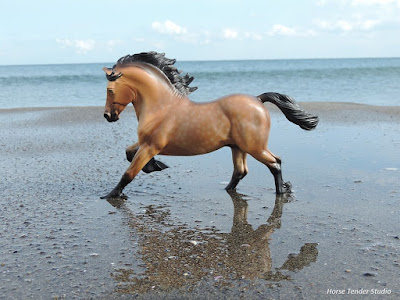 I nestled him on a nearby breaker (far from the water) and moved on to my next experiment. 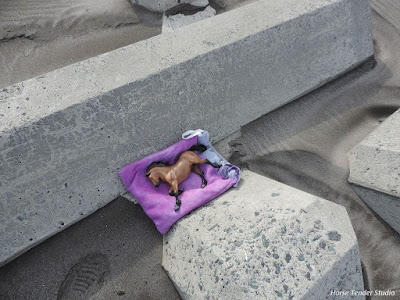 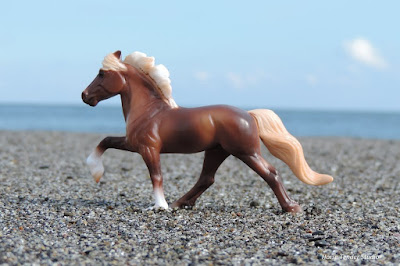 I had high hopes for being able to get some great Stablemate pictures, but I had trouble getting the focus just right and I didn't dare wait for a wave to possibly wash him away.  He was able to stand on top of the sand, versus sinking into it, but I did have to plant him a bit since the wind actually knocked him over a few times. 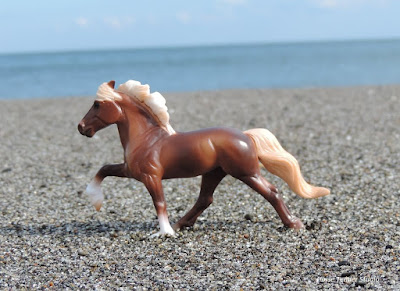 I only took a few pictures of him and then decided to call it a day on that part of the trip.

I wasn't completely alone on the beach, Max was with me.  While I wrangled plastic ponies, he patiently waited.


After the pony pictures, I asked him if he was ready to go for a walk.  He replied with his skeptical face.


I meant it though and after stowing the ponies back in the car, we set off up the beach. 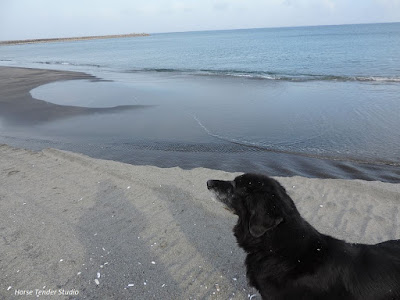 Way out along some breakers I saw ducks.  You can also see the snow in this picture.  It had started snowing just as I finished the photo shoot and by the time we got to our turn around point, it was really coming down. 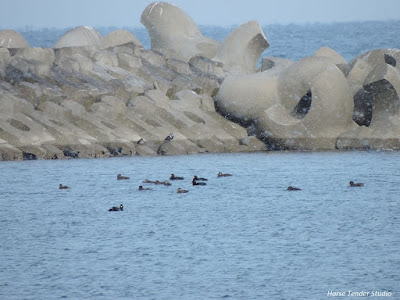 We stopped the walk at a freshwater runoff canal, where Max got a drink. 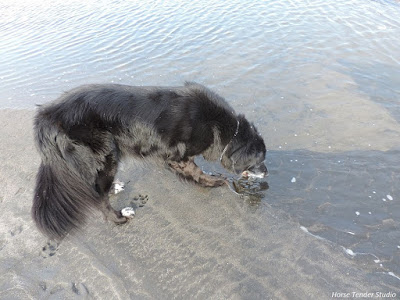 Then it was time to turn around and head back.  Often Jeff and I will cross the canal and keep going, but I didn't want to overdo it today, particularly for Max who's knees aren't what they once were.  :( 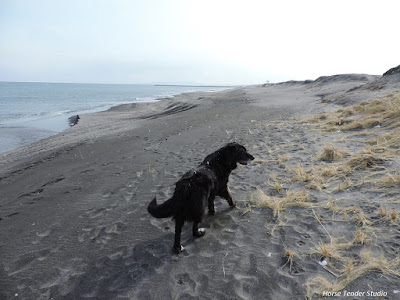 It was snowing for the whole walk, but I don't think either of us minded; Max and I both love snow.  It was the first time I've walked on a beach in a snowstorm.  It was pretty cool.

Along the way, Max found a few sticks and carried each of them for a bit, but none of them were worth keeping he said.  He has found several sticks and a couple of other random things on the beach.  If he really likes them, he'll carry them all the way back to the car and leave them in it.  The back seat of Jeff's car usually has a few of Max's beach treasures on it. 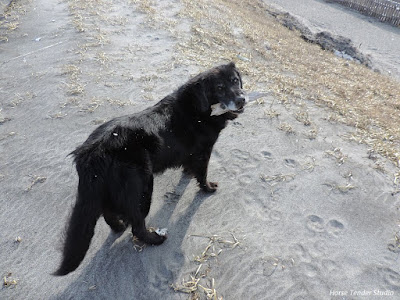 One last picture as I contemplate that I "survived" another walk by the ocean - and I wasn't even nervous about it. 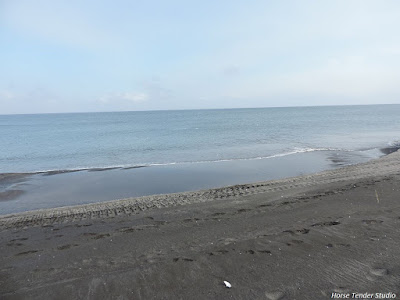