Yesterday I went out to the Misawa Horse Park again.  My new friend, Tsukako-san, told me she would be going out to take a lesson.  I didn't feel up to taking an actual Yabusame lesson; I told her I was embarrassed that I haven't been doing the "hundreds of squats" that I'd declared I needed to do after my first attempt to ride Yabusame style.  I did want to ride though and thought maybe I could pay for a "free ride session" and just cruise around for a bit while she had her lesson.

I ended up taking a lesson with Tsukako-san, we both rode together and Banri-san (the instructor) gave us a basic riding lesson.  My mount was Mulan, the horse that I've ridden each time out there.  Turns out she is the boss of the herd and she is also much faster than Orphee, Tsukako-san's mount.  We started with me following, but Mulan was a horrible tailgater, being much faster in her gaits, and I had a hard time keeping her from being up Orphee's rump.  So we switched and I was our front leading the laps, but then I had to listen for changes from walk to trot, and also when Banri-san called out for circles and change of direction.  It went fairly well, Mulan was much happier to be out on the lead.

After we trotted around and around for what seemed like forever (I was made aware that I'm not in tip-top riding shape anymore!), we took turns having laps at the canter.  Mulan and I went first and did a bunch of laps at the canter.  It was SO much fun and certainly a much needed ride.

As Tsukako-san took her turn at the canter laps, Mulan and I hung out in the center.  I fished out my phone and snapped a picture to remember the ride. 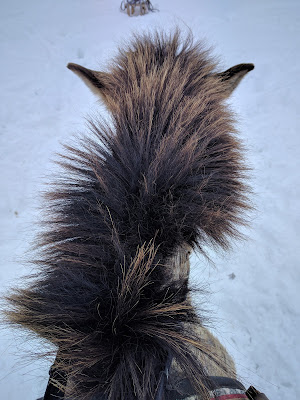 We walked a few more laps, then rode back to the barn.  Before I hopped down, I asked Banri-san if she would get some pictures with my phone. 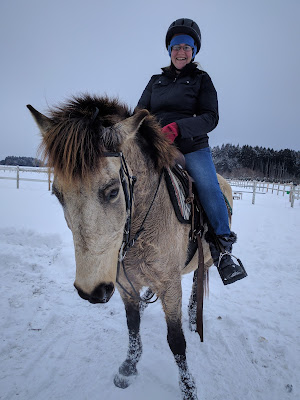 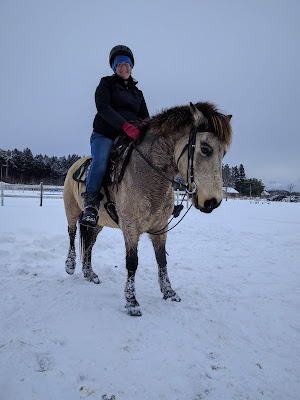 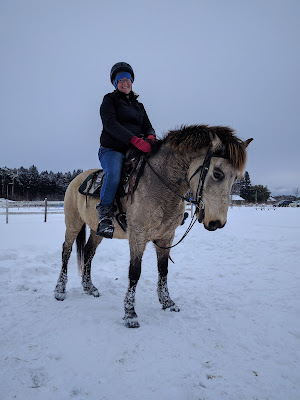 Another thing of note: you might notice the snow on Mulan's legs.  We did the entire lesson in almost knee-deep snow!  It was also quite cold, but riding kept us warm.

After the lesson, I was invited to stay and have lunch.  They were having a get together and cooking what seemed to be the Japanese version of gumbo - all sorts of things thrown into a pot - cooked over a log on end with a fire in the middle.  It was very good and I tried some crazy stuff - fish parts that I won't mention.  Thankfully, I'm not a very picky eater and was brave enough to try all of the "scary food" (as someone joked).  Then we went and hung out for a little bit in their office type building, with a kerosene heater running, had coffee and tea, and a good chat about learning Nihongo (Japanese language) and English.  I made new friends and had a wonderful time.

It was the best day.