We didn't have any plans for New Year's Eve this time around.  Last year we'd made the 5 hour drive south to Sendai city for their "Pageant of Starlight".  It was stunning - every tree along a wide downtown street is completely covered in lights.  We did the trip down and back in one (long) day, making it back to Hachinohe city (not far from where we live) right before midnight.  We'd heard that at all of the Shinto shrines and Buddhist temples have celebrations to bring in the new year.  We managed to find a small shrine (and more importantly find parking!) just in time last year.

This year, we decided not to make the trek to Sendai, but instead decided to go and try to see the celebration at one of the Shinto shrines in Hachinohe.

At the last minute, I decided to take Chewie with me, snapping a quick picture of him in the car.  I wasn't sure if I'd be able to get any pictures of him at the shrine in the dark. 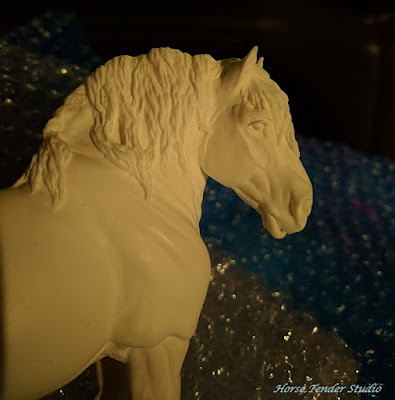 We got there around 10:30pm and it was not dark at the shrine!  In fact, the area was very well lit.  So I snapped a quick picture with the Torii gate to enter the shrine in the background. 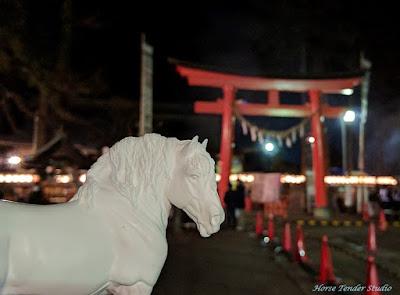 Lighting in the area was done with a lot of lamp posts and such, but also many beautiful lanterns... 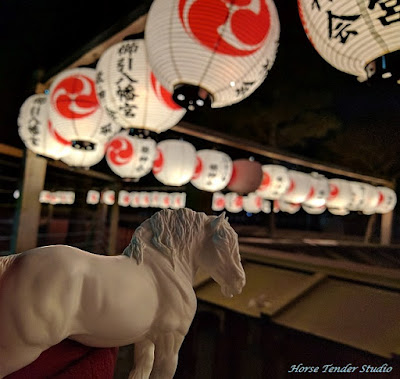 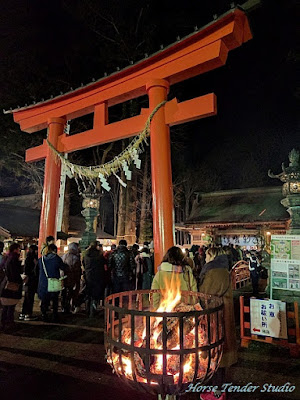 There were two braziers of fire, right outside the main Torii gate and each one had a crowd gathered around for most of the time we were there.  It was very cold and the warmth of the fire was very nice.

The picture above was taken just before midnight.  The line of people that you see are a tiny part of a massive line that led into the shrine and up to the spot where people pray.

We stayed until just after midnight, when a cheer spread through the crowd and the line began moving to the prayer spot, and then we headed home.


Today (New Year's) we thought we'd go on a drive, maybe do a bit of shopping if any of the stores were open.

I happened to see a message on Facebook about a big sale on yarn going on at one of the malls.  I told my friend Holly, who has a crochet business, and she set out to see if she could score some yarn (boy, did she!).

She called after a while to warn us that if we were headed down there, that the roads were packed, she barely found parking, and the mall was a sea of people.  'What was going on?', I had wondered.

It seems that New Year's Day is the equivalent of Black Friday.  Huge sales, everyone (or so it seemed) heads to the mall to shop.

We finally managed to find a parking spot out in the boonies and made our way into the crowd.  The mall recently reopened after a massive remodeling project and I'd been eager to see how the craft store (one of my favorite places to shop here) was looking now.  I was also curious what other sales, in addition to the yarn, that they might have.

It turns out that in addition to the yarn sale - which was: all of the yarn you could stack and then dump into a basket for 1,000 yen (basically $10) - they had another deal where they had a large bin of scrap leather and anything you could fit into a ziplock bag, was 1,000 yen as well.

Here's my bag (pencil for scale): 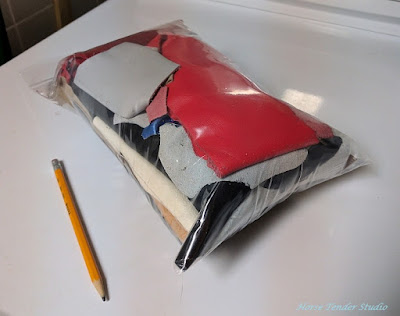 I'm happy to report that I was able to get every piece that I wanted (barely) to fit into the bag - AND close it.  Before I took my turn, there was a woman CRAMMING leather into her bag and trying to get it to close, so I wasn't the only one trying to make the most of it, haha.

The first thing I'd seen were some of the colors: reds, blues, metallics.  All small pieces, perfect for model horse projects, and about everything I got seems to be good stuff: small grain, smooth, most of it already thin.  There are even several pieces of very thin, super soft suede!

I had to dump everything out and get a quick picture. 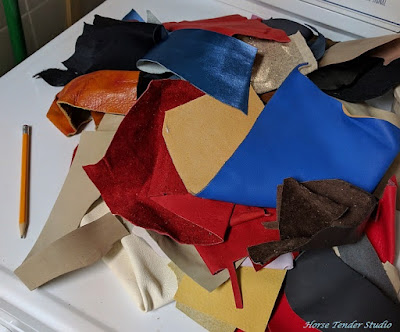 I think my favorites are the metallic light blue pieces, one on top here. 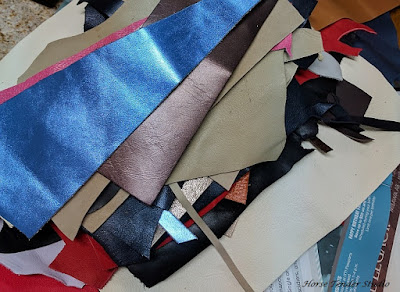 After the craft store, we wandered around in the crowd a bit, poking our head into a couple of other stores, and then slowly made our way back out of the mall.  It was a experience, that's for sure!

In the end, I'm glad that we braved what appeared to be the Japanese version of Black Friday and I'm really excited about the scrap leather find!!

I'd say this year is off to a great start!