I've been enjoying looking at people's pictures of their loot from Breyerfest.  (Even if it makes me wish even more that I'd been there!)  It is fascinating to see what kind of things might be available there and makes me all the more sure that I HAVE to go, one of these years.  I'm hoping maybe the first year we are back in the States (or maybe the year after, since we might be moving in summer or fall), not sure yet.

Part of me doesn't want to think about it at all, because - as I've said before - I LOVE Japan and don't want to leave.  An event like Breyerfest though is something to look forward to when I am uprooted again.

Seeing all of the loot pictures and blog posts reminds me that I had wanted to share the new additions to my herd made at BreyerWEST, and on my Epic U.S. trip in general.

So, without further ado... 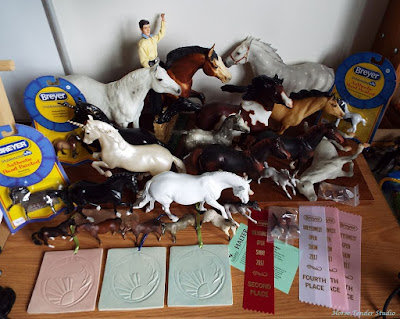 In summary: I bought a few OFs, to stay OF, and a lot of bodies.  I won a few tiles at A Good Vintage and won a few ribbons (plus one NAN card) at the BreyerWest Open Show.

The most unique (to my current collection) thing that I bought is this dude (the rider): 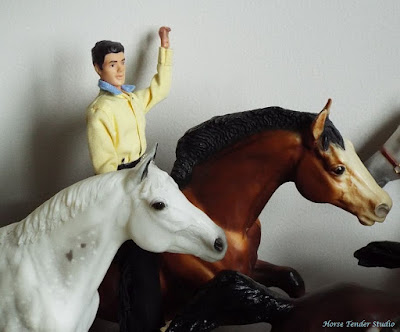 He is my first ever actual doll for Breyers.  When I was a kid, I used Barbie dolls or, most often, no people at all.


I could go into detail about all of the new additions and a few of them might make their way into having their own Model Horse Profile feature someday.

Right now though, I wanted to highlight a couple of horses that joined the herd from other parts of the trip.


I haven't seen a new Breyer that I was really excited about and *had* to have in quite some time.  Don't get me wrong, there are a lot of beautiful Breyers out there, especially nowadays, but I don't consider myself much of an OF collector anymore and while I can appreciate a pretty new mold or color, it's been a while since I saw a new OF and thought "I've got to have that!" 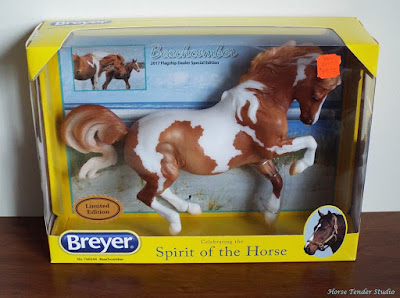 For now, I'll say that she is extra special to me, because...  I bought her at a Breyer dealer ON Chinoteague Island!!


Next up in the acquired post-BW department is this dapper fellow.  His name is Marshmallow and he was given to me by my friend, Susan! 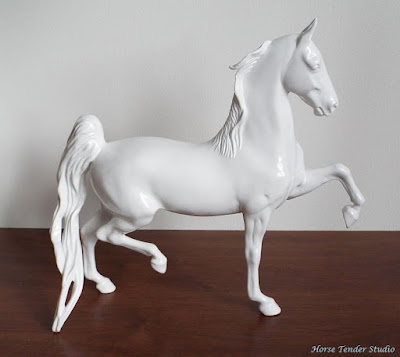 He will be getting his own exciting posts, because he is the latest to join the traveling herd and, much like Chewie, is already having his own adventures in Japan!