I pretty much can't stand "Black Friday"...  I think it's sad how people are willing to trample each other to buy more STUFF in a world where so many people have too much stuff already!  All that, a day after we are supposed to be tankful for what we have.  It just makes no sense to me.  But, of course to each his own.

There was only ONE sale I was interested in this year amidst the bombardment of ads, banners, sales flyers, commercials, e-mails...  That would be the sale at Tandy Leather.

For many, many years I've had an interest in leatherworking, but have never really done anything about it.  My interest in it, no surprise, comes along in tow with my interest in all things horses.  While I think it would be awesome to make REAL horse tack (and someday I hope to give it a whirl), my main interest has been on the smaller scale - model horse tack.

A while after I had started making the cross-stitch pads, I thought it would be neat to have a saddle to advertise them under.  Naturally, I wanted to make the saddle myself and the widely accepted way to start with that is the Western Saddle Kit from Rio Rondo, which I picked up a few months or so ago: 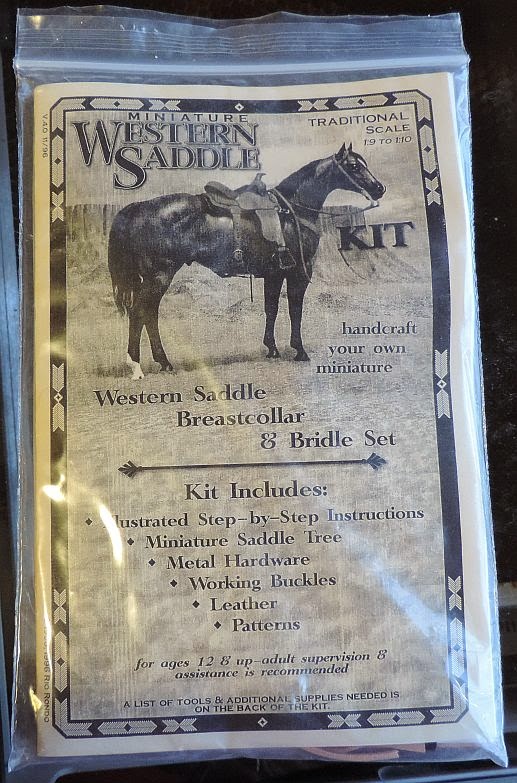 I haven't started on it yet, one reason is because... well... I was afraid I'd mess up the piece of leather that came with it.  That's not a concern anymore: We slept in some this morning, then got up and went to town to Tandy for their Black Friday sale.  We bought several things, the highlight - and the reason we went - was for tooling leather sides that were only $39.99 (regular price $152.99).  We bought two of them.  That was the limit per customer, otherwise we might have bought more!  They are pretty huge (rolled up in the picture) and seem to be the perfect thickness for my model horse tack making dreams.

I also got two bags of lining remnants (on sale, half price), a skiver (on sale, 30% off), and two leather stamps (also half off).  Jeff got some leather pieces to work with on the laser and some rivets and hardware for other projects.  Altogether we spent less than what one of the tooling sides would have cost at regular price.  Yay for sales!  Though if we would have had to sleep in a tent in front of the store and/or be there at 3-4am, it wouldn't have happened.  Thankfully they opened at 9am and it was a pretty laid-back experience.  The store was more crowed than usual, but not insane, and they had coffee and doughnuts for everyone.

Just in time for finally taking the plunge and getting some leather and tools, I came across some tutorials online about doing miniature leather carving.  I'm excited to finally get going with some model horse tack!

(and yes...  I now have  MORE supplies when I'm needing to get rid of things...  but I see it as refocusing my efforts towards what I REALLY want to be doing, versus just odd random creative projects here and there - those are the ones that will be going away)