What Have I Gotten Myself Into? - Again

This seems to be a question I've asked myself a lot lately.  Most recently when I hurled myself in a college Japanese language class.  That turned out well, so maybe this latest crazy adventure will too...?  Oh boy...

I have always loved to sing.  I grew up in a musical family.  My Granddad sang, played guitar, and harmonica.  My uncle does all of that, fronts a couple of bands, and has a recording studio in his house.  My mom has one heck of a set of "pipes".  She was the lead singer in several bands when I was young and even recorded a demo tape at one point.  She also won singing contests at the professional level.  I grew up surrounded by music and I was singing from an early age.  I've never had any formal training, I just sing what I hear.

At some point in my young adult life, I discovered karaoke.  The first song I ever sang did not go well at all.  I was extremely nervous and didn't actually know the song as well as I thought.  But I practiced, tried again, and ended up loving karaoke.  I've done it off and on over the years ever since.
Along the way I've entered a few singing contests, but have never won anything.  I get the same feedback - after a regular karaoke song or contest...  "Your voice is great, but you need to move around!"  I have such awful stage fright that I stand in one spot, deer in the headlights, or eyes closed, often with my knees shaking.  Despite all of that, I can belt out a song.  To quote Genesis: "I can't dance".

A couple months or so ago I went out with a couple of friends to a local club to celebrate one of their birthdays.  It happened to be karaoke night and I decided to sing.  My new friends here had never heard me sing.  After they had, they - and the two hostesses of the karaoke night - all started pushing me to enter "Misawa Stars" - a singing competition that was being advertised here. 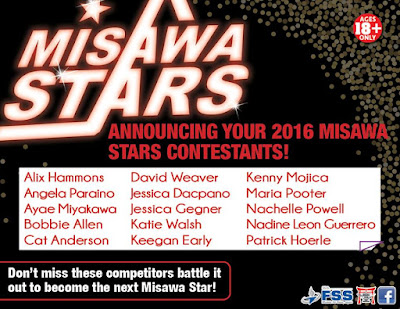 I'm not sure what I was thinking, but one day I signed up, a week later I did my audition, and...  made it in.  *shocked face*

My audition went the way of all my past performances - or maybe even worse.  I think I was more nervous than I had ever been.  (thankfully it was a closed audition!)  The judges loved my voice, and I guess that alone was enough to get me into the show, but they all told me I'd have to: "own the stage" - "wow the crowd" - "get the audience on my side"... and so on.

I have a little less than two weeks to figure out how to do that.

The whole thing is going to be run like American Idol: including several performances, judges, crowd input, eliminations...