I certainly hope this won't be a regular feature on the blog!  However, I couldn't pass up the chance to use some alliteration...  This took place early Tuesday morning, Japan time.

Jeff is usually up and out the door for work before 6am.  I am generally NOT an early morning, bright-eyed and bushy-tailed type at that hour (unless horses are involved...).  So I often start my day by lying in bed for a bit after he leaves, surfing around on my phone, and waiting for all of my systems to come back online.

This morning, I thought I felt the bed shaking.  I couldn't be sure, thought it could have been our dog, Max, scratching or otherwise moving around and bumping into the bed.  As the shaking went on and got a bit more insistent, I knew it was an earthquake.  I figured there was probably no better place to ride one out than lying in bed, so I stayed put.  Though the shaker seemed to last for a little bit, I wasn't concerned at all and kept reading blog posts.

Right after the quake, this popped up on my phone. 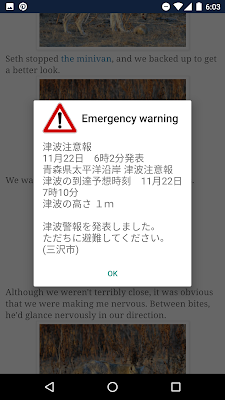 At the same exact moment, emergency sirens in town started going off.  THAT'S a first.  Uh-oh.

The spoken message playing with the sirens was in Japanese, same as the phone alert.  I'm learning more and more of the language, but was nowhere near able to understand what was going on.

Thanks to the Google Translate app, here's what the phone alert said: 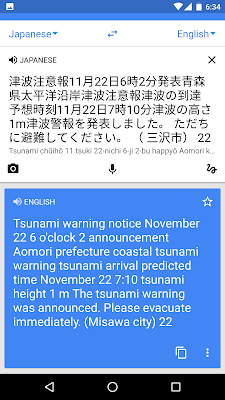 The "evacuate immediately" was concerning, but I took it to mean coastal areas.  We are about 3 miles in from the coast and high enough that we should be just fine with a rise of 1 meter.  And we were.

Once again, like recent quakes that have made International news, and even the "big one" 5 years ago, all the action happened to the south of us, about 200 miles away in this case. 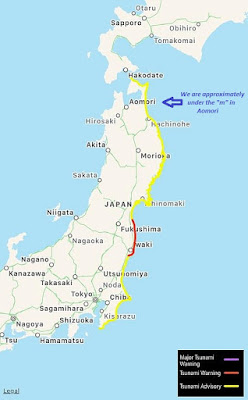 Though I felt certain we would be fine, I was worried about the people to the south.  This earthquake happened off the same part of the coast where the horrible earthquake and tsunami happened in 2011 and the people are still struggling to recover in many areas there.

Someone on one of the local Facebook groups posted a link to watch live Japanese news broadcast, being translated to English as it happened, and I had that running for a little while this morning.  So far it sounds like only a few minor injuries have been reported.  I hope it stays that way.  As a bit of a comparison: it sounds like, at it's worst, the earthquake today produced a tsunami of 4 feet, compared to 180 feet in 2011.  That's all I've heard so far.

Quite a way to start a day!