and a little pumpkin...

I've often admired the holiday-themed model horse pictures that others share and have always wanted to do my own.  This morning I randomly grabbed a couple of "props" - a small decorative pumpkin left over from Halloween time, and my favorite Bonsai tree, currently wearing its pretty fall foliage.

Next, I had to decide on some horses.  Who should I use?  I ended up grabbing several of my SM customs, favorites and/or ones who are currently doing well in MEPSA showing.  I'm particularly thankful for that, so I figured it was appropriate.

Without further ado, I present my first "official" holiday photo: 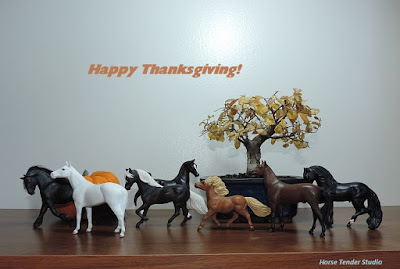 It's not the greatest; I still (always) need to work on my photography skills and I'd like to start gathering/making a bunch of scale props so I can do more fun photo setups in the future, but..  it's a start, I suppose.


Because each horse was specifically chosen, I thought I'd do a quick introduction of them.  Several of them already appeared in a post about some of my old custom horses, but in the interest of making this Thanksgiving-related, I wanted to mention their more recent photo show success.

From left to right: 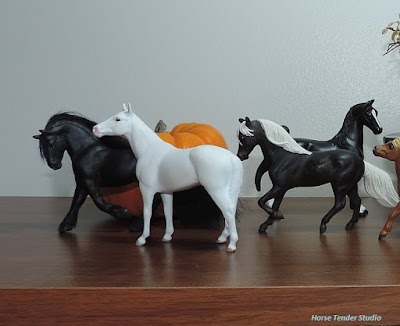 Hawke Nevarre - Friesian stallion, my very first drastic custom Stablemate.  He was an unbeaten live show horse in the few years after his creation. Fun fact: he was haired during lunch break at his first show, rushed to the judging table in the nick of time... and won the class.  So it began.  He's not really competitive anymore, but is still qualified for the MEPSA Championship in Liberty class.  For a while now I've had the idea to make a Hawke 2.0...

Days In Avalon - Thoroughbred mare, an early repaint, she is currently NAN-qualified from my last couple of live shows and she is qualified for the next MEPSA Championship in the Thoroughbred class too.

(front) Wild Honey - Rocky Mountain Horse mare, another early repaint, fixed up since then.  She had her own post about her MEPSA wins.

(back) Not Today - American Saddlebred mare, slightly more recent, but still approaching 10 years old now.  She has qualified or the Championship in the Black color class at every MEPSA Mini Specialty so far.  I guess she's my best black horse; I've painted a lot of them over the years, because I love the color on real horses. Backflip - Shetland Pony stallion... What can I say about him..?  He has never been one of my favorites, I wasn't happy with how he turned out, even back then (he's about 15 years old) and..  I don't know.  I had tried to sell him, no one wanted him.  He's been the "ugly duckling" of my herd for quite some time.  Then I entered him in my last live show before our move, just because, and..  he won the custom pony class.  When I expressed my surprise (shock) at the blue ribbon and NAN card, the judge exclaimed that he was a "great Shetland Pony stallion!"...  This year, he's qualified for the Championship at every MEPSA Mini Specialty he's been to, in either Pony Type Stallion or British Ponies...  What do I know?

Maskav - Akhal Teke stallion, another old classic favorite of mine.  He was made around the same time as Hawke Nevarre, but much less work.  I think he'd held his own in live showing back in the day, not so much these days.  However, he's qualified for MEPSA in Other Pure Light Breed and placed 4th of 40 in Simple CM Workmanship and that made me really happy.

Nightbird - Andalusian stallion, he was painted around the same time as Not Today, about 10 years ago.  He doesn't have near the show success of the others, but he did get one MEPSA qualification in the Black color class.  He's in this group, because... well...  I think he's pretty.

The other star of the picture is my beloved little variegated Chinese Elm. 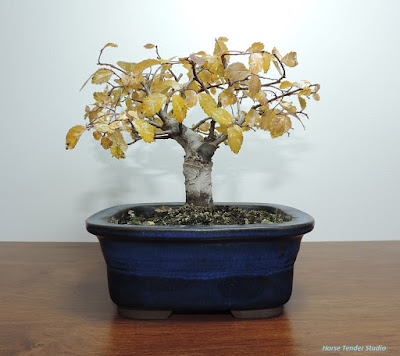 She (I have a friend who refers to plants, trees in particular, with a gender and just now I thought: why not) was my very first Bonsai.  She's changed quite a bit in the time we've been together, from a scraggly, overgrown, bushy little thing, to an "acacia" look, losing all her leaves mid-summer (surviving my mistakes), growing them back with lots of variegation, to the current rounded 'do.  Last year, I regretted not taking the time to take a picture of the fall colors - and actually I think they may be past their prime here.  I was watching closely for the change this year and even asked my class instructor if everything was okay.  The trees outside had long since changed and started dropping leaves, but my little Elm was still green (and white).  He assured me that everything was fine.  Overnight, it seemed, all the leaves turned yellow, prompting me again to be concerned, but she seems to be okay and is just marching along with the changing seasons.  I'm thankful that she is a survivor!

To wrap things up, and get back on track...

I'm thankful I can have a little herd of horses that I love, even kooky little Backflip, and that are doing well in my return to photo showing.  I'm also very thankful that my little Elm tree has, thus far, survived my bumbling attempts to have, and care for, Bonsai trees.

I hope everyone has a great Thanksgiving!