A while ago (wow, almost two years) I came up with the idea to do a bat foal.  Well, time really does fly, but today the lil' terror was finally started!

First thing's first..  as I had said before: I've got some bad news, bat. 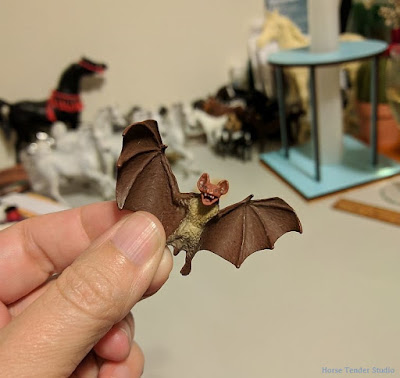 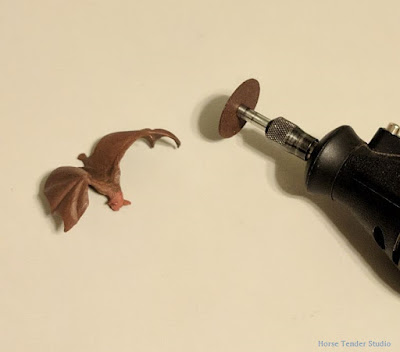 I'll spare you the gory details, but then there were little bat wings. 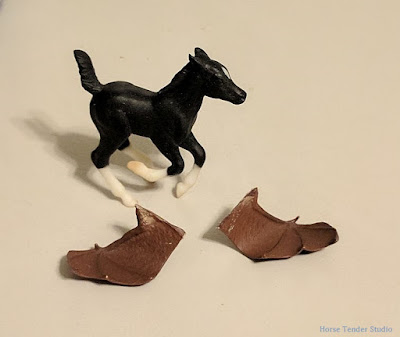 I started by using the fine engraving bit on my Dremel (one of my all time favorite bits) to start hollowing out holes at the tops of the shoulders. 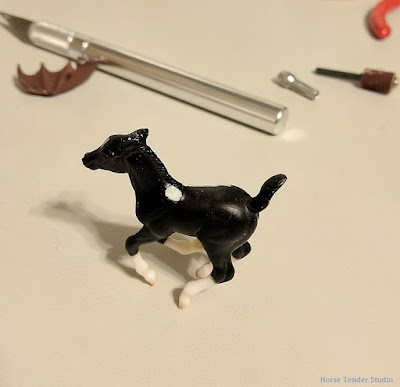 I had used my exacto to scratch some tiny lines to show where the wings would start and end.  Then I used the engraving bit to make a channel for each wing to sit in. 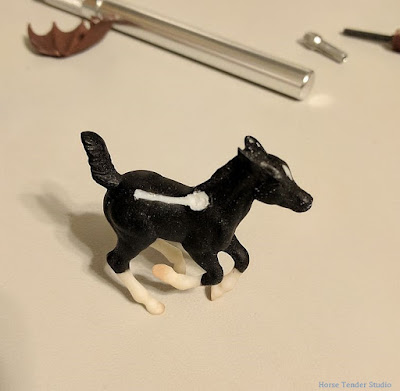 Time to get out some wire, this is what I used. 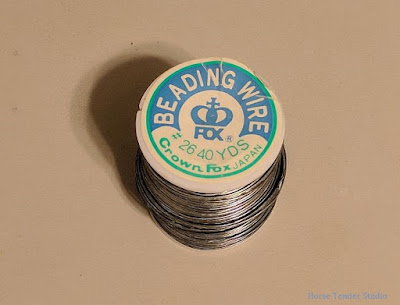 I cut a couple pieces off, folded them in half and twisted them tightly to make pins. 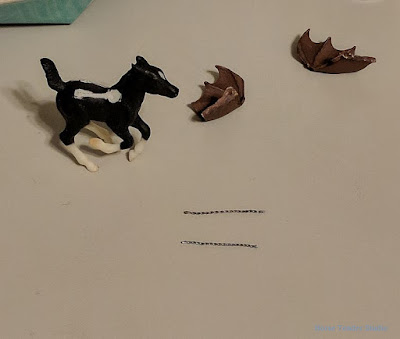 Then I got out some thread, red happened to be handy, but any color works. 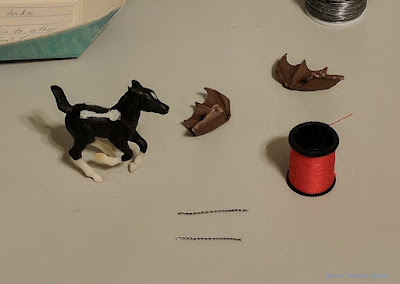 Using tacky glue, I wound the thread around the twisted wire pins until the wire was covered, except for the very tips.  This is the same way I make tail bones for haired horses, the wire makes the tailbone poseable, the thread gives the glue something to grip when inserting the tailbone and gluing the hair on. 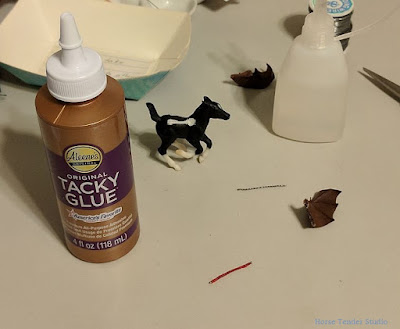 The label fell off the bottle, but this is thick CA glue.  I had used my engraving bit to make some tiny holes in the thickest part of the wings, where the bone would be and where they will connect to the shoulder.  I then put a little dab of the CA glue on/in the hole and stuck in one of the thread covered wire pins. 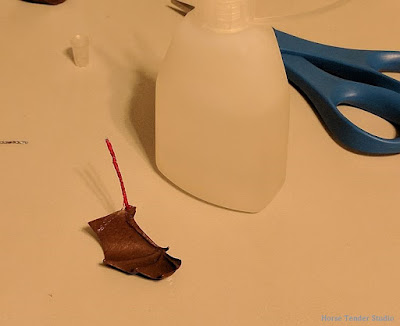 After both wings had pins, I used the engraving bit to make two holes in the middle of the shoulder depressions.  Then I started trimming the pins down until they were a good, tight fit. 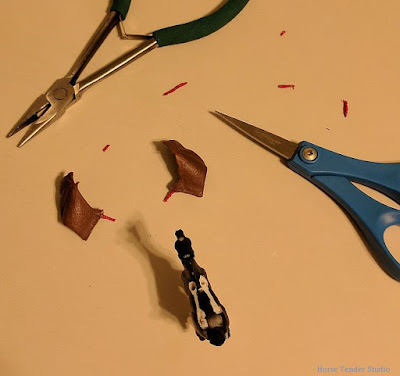 I stuck the wings in to test placement and suddenly: bat foal!! 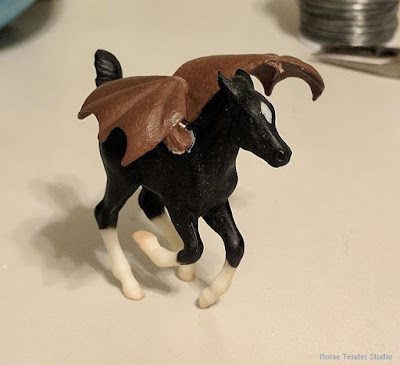 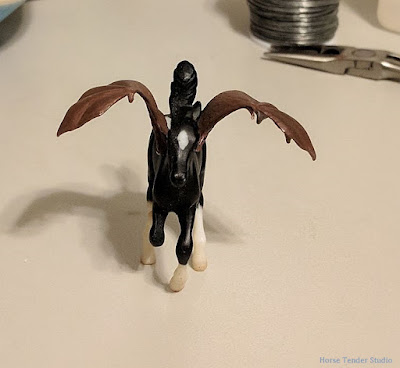 "Though he be little, he is fierce" (paraphrasing there) 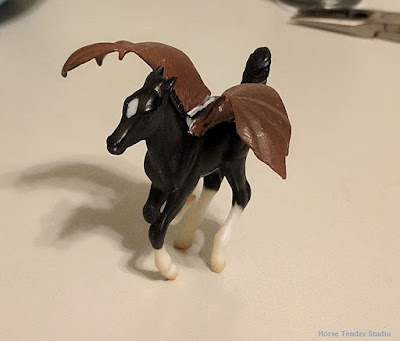 I intended to take the wings back out before the final attachment, but the one had some extra CA glue that was already grabbing the model, so I left that one in place.  My first plan was to mix up some apoxy, use a couple of small noodles (one under each wing) to squish them down into, then do a bit of the initial sculpting around the connection. 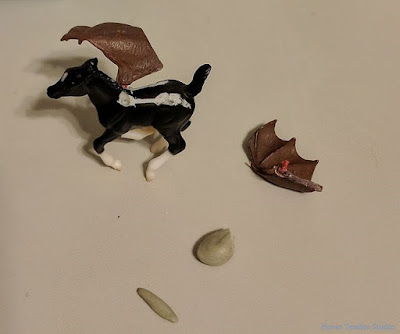 However, I had doubts about the strength of such an attachment for the length of the wing base.  So instead, I did a thick bead of the CA glue along the channel I'd carved out and set the wings down in place. 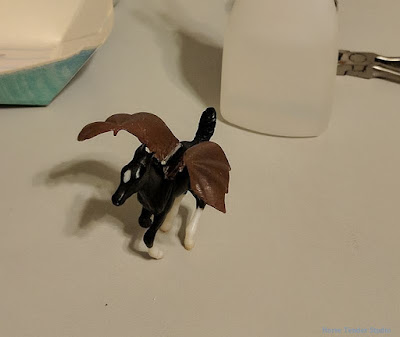 They should be on there for good once this glue dries! 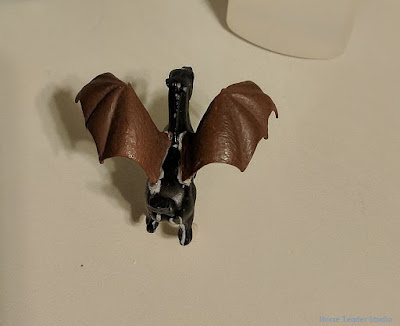 Then, much like Antar, this little guy was safely tucked into a temporary "earthquake stall" to hang out while his wings dry. 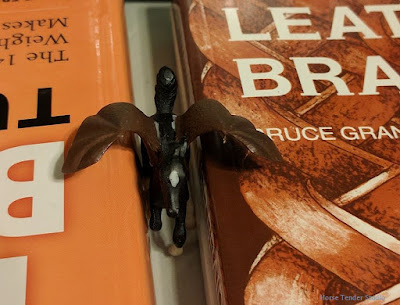 All done for now.

But, wait, I had mixed up some apoxy, what should I do with it?

I chose this guy for an apoxy dump - obviously he has a long way to go! 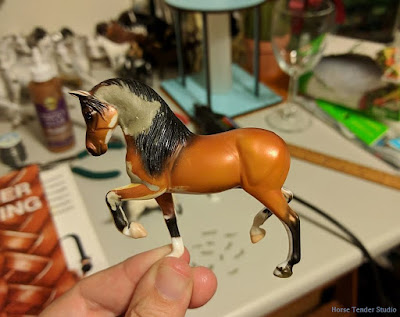 With the rest, I spontaneously made my first ever batch of (tiny) ears!  :-O  One of the Stablemates on my short list to be customized is one that I'd like to put new ears on.  It may be that none of these will work and I'm not sure there's even a good matched pair in the batch, but it's a start. 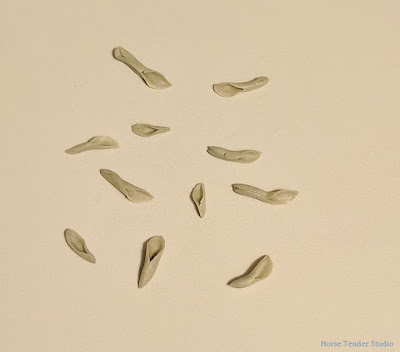 Stay tuned for progress on the bat foal; tomorrow I plan to do his sculpting and then hopefully get some primer on him.