I suppose this could be another "State of the Studio" type post.  There have been a lot of things happening here that I've wanted to talk about and wasn't sure how to do it.  So I'm just going to do it.  (haha)


It's been...  interesting here lately.  I've talked a bit about the latest typhoon to pass through our area, coupled with the latest round of vendor show madness.  Also, we've had the North Korea missile launches you may have heard about.  There have been two mornings (so far) where we were awakened early by sirens and alarms going off, telling us that missiles had been launched and to take cover.  Both of them passed over Hokkaido, the northern island, and landed out in the Pacific ocean.

That was definitely something new to add to the list of life experiences.

The first time I was concerned, but realized there was nothing I could do about it, so I just waited for news.  The second time was a feeling of: "this again?  ugh."  I was worried about it all at first, but then decided that I don't have time to worry, I've got stuff to do!  Worrying won't stop whatever is going to happen from happening.  That's something that it took me moving halfway around the world to figure out.  At least I think I've got it figured out.  In an odd way, moving here to the land of earthquakes, typhoons, tsunamis, and.. missiles... has actually helped me with my anxiety I think.  It might not make any sense, but I feel like it's forcing me to be at least somewhat mindful.  Any of these "crazy" things could happen at any minute - without much, if any, warning (except the typhoons I suppose) - and I can't sit around worrying about them.  I have to live my life and deal with them if (when) they happen, in that moment.

Big talk, sounds great, but I do have concerns about what the next two years holds for us here.  Worst case, I'll have to evacuate back to the U.S.  Well, I suppose that's not the *worst case*, but it sure would be a complicated pain in the butt, loaded with uncertainty, that I'd rather not have to deal with.  However, of course, I will deal with it if I have to.

Jeff's schedule at work has changed drastically, not in response to the silliness of our "neighbors", but just because.  After being on day shifts for many years, he went to swing shift.  Then right around the time we were (sort of) getting used to that, he went to a 12 hour graveyard shift.  We are both sleep deprived and have no idea what day it is probably 95% of the time.

On top of it all - and really of least concern, more an annoyance - my laptop is on its last legs.  Truthfully, it's been on edge for a while now, but after Jeff had to bring it back from the dead again last week, he decided it's time has come.  I've had it for 6 years, so it's "ancient" in technology terms I suppose?  Jeff has done several upgrades to it, and has now managed to bring it back from the dead a few times, but he has decided that I need a new one altogether.  I've been using my laptop as my primary computer for a while, pretty much only using my desktop to run the laser.  Which means I've been using the laptop to manage my photos and - this blog.  This is yet another reason my plan of daily posts for the month hasn't quite worked out - though I'm doing better this month than I had all spring/summer!  ;)

Thankfully, during its latest round of death throes, Jeff was again able to recover the files that I had on it.  I've been backing up everything to our server and to the storage drive that's not affected on here, but I hadn't done a backup in a bit and had stuff I really didn't want to lose.  He was able to get it all back for me, he's a handy guy to have around.

I suppose that's it for the news report on how "interesting" life has been lately.

Oh!  My coffee pot died.  Haha.  Jeff was able to bring it back too.  Crisis adverted.  I would have probably just bought another one, but the only one available here (that we know of - on base) is a flimsy little thing that neither of us wanted to get.  I had one of them for an "in between" option during the move here and it worked, but barely.  I don't use a full size coffee pot, but one of the small 4 cup ones.  So Jeff worked his magic and made my trusty little old coffee pot work again.

In more on topic Studio news, I've been at work on two cross stitch projects: a commission saddle pad and my next cross stitched Arabian costume.  I'm putting the finishing touches on a couple of commission Stablemate blankets and am also finishing several more to add to the inventory here.  Last, but certainly not least, a few new horses have joined the herd and I need to do a mass photo shoot of all of the new faces!  After going for quite a while without adding any members to the herd, I've been doing some shopping (and trading) lately.


I didn't really have a picture for this post, so here's Tealight, helping my with my latest round of organization in the studio (cat pictures are always good for illustration, right?): 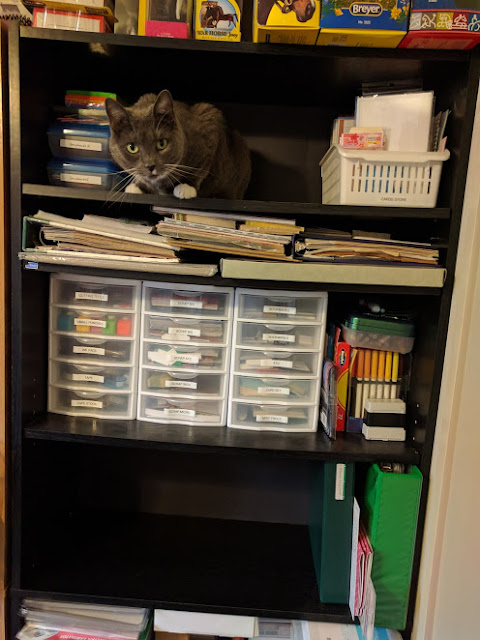