I meant to type all of this up yesterday, but I was just too exhausted.  We did end up going for a motorcycle ride in the Hills - it was supposed to be our last "unseasonably warm" day.  So even though Jeff and I were both tired, we decided to go for it.  I have never come so close to falling asleep on the back of a motorcycle, but it was a good ride and a good time in spite of me being more tired than I can ever remember being!

But that's not what you're here for, right?  On to the show report!

Here is our table after it was all set up:


We had all of the laser stuff to sell on one side:


In the middle of the table was my small herd of small custom horses.  Most are my old ones, having been created ranging from 12-18 years ago!  Only a few newer works were in the mix:


(The big grey Arabian mare on the right ride of the picture is the only custom horse I own that I did not do.  I bought her many years ago, I had seen her somewhere and always thought she was SO pretty.  When she came up for sale, I jumped at the chance to have her.  She is signed as having been created in 1986.)

Lastly, on the other end were my herd of OF (original finish) models:


Most all of my original finish horses are old.  As I was unwrapping them all, I started to feel like I was out of my element and feeling like I didn't belong there.  I was looking around at other people who had the biggest, best, newest, rarest, most expensive horses available and there I was with what mostly amounted to my childhood/teenage years collection.  "What I am I doing here??" I was asking myself...

The day did start out nicely though, in the very first class, one of my old favorites took 2nd in his class, qualifying him for the Nationals.  He is a SM G1 Arabian stallion special run from 1996 or 1997 that I had named "Solo": 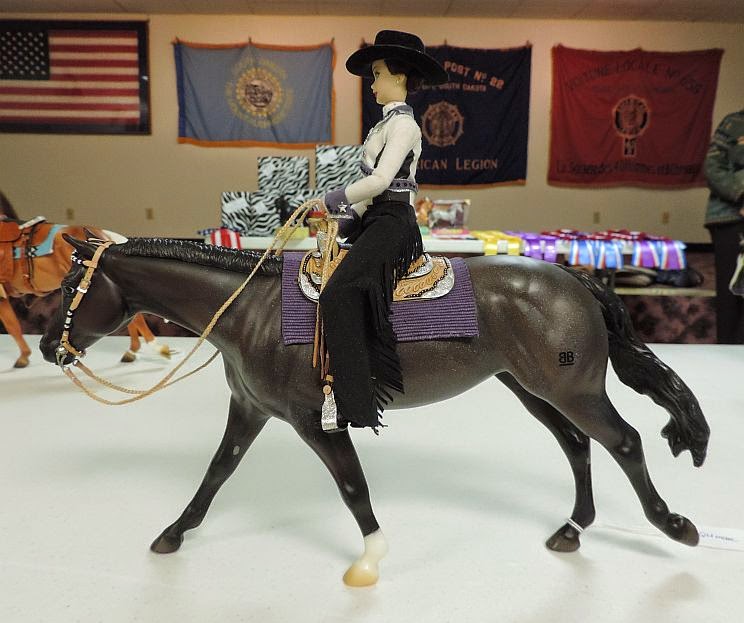 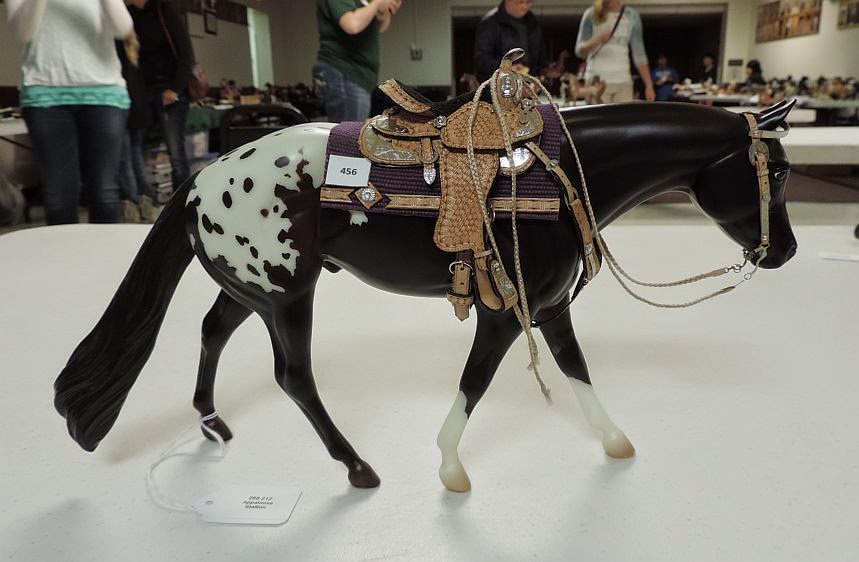 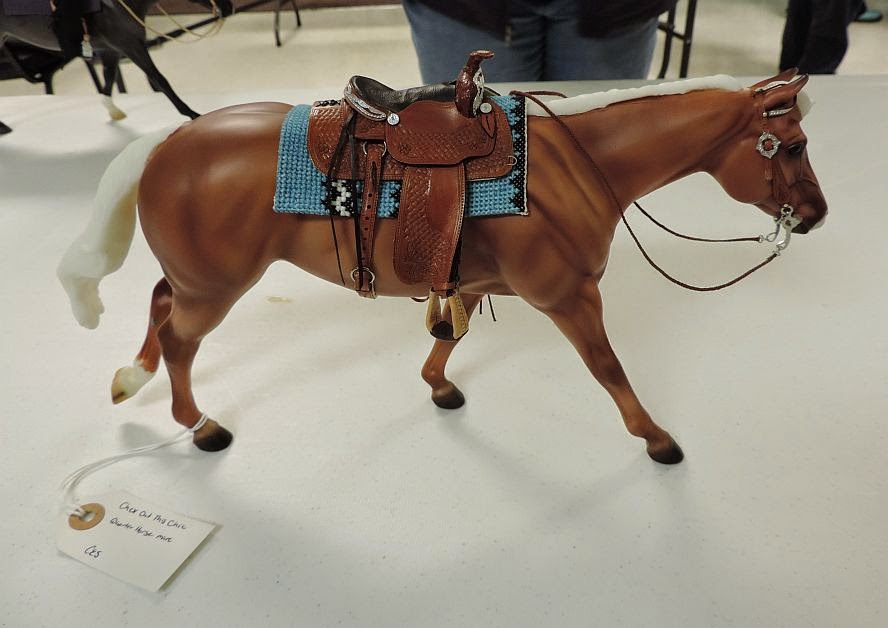 I was particularly interested in that last one because it was sporting a cross-stitch saddle pad!


I had brought my stack of cross-stitch pad creations and I ended up talking to the performance showers that were sitting next to us.  They seemed to like my pads and they gave me some ideas for marketing them.  It sounds like not many people are making them for the hobby anymore.  I was encouraged after our chat to keep stitching and start trying to get my little saddle pad creations out in the world!

After the OF Mini classes were coming to a end, here's what that end of our table was looking like:


A quick picture of the callbacks for the Champion and Reserve Champion OF Mini Breyer.  Half of the horses on the table were mine!  What can I say, I have a ton of the minis and I brought some for every class:

When the Champ and Reserve were announced..  I had the Reserve!  I was so excited - and shocked.  I almost didn't bring this little guy, but I was so excited to show after so long that I took minis for every single class.


When we first arrived, we were given nametags to fill out and wear.  Jeff said, "My name is Inigo Montoya"..  So I wrote it on his nametag that he wore all day.  Surprisingly, no one seemed to catch it. 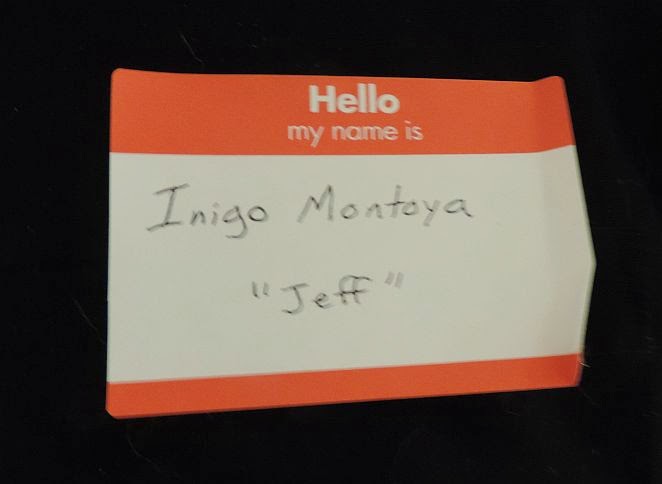 After the OF Minis, came the larger OF horses.  I had a sprinkling of winners there, one of my most shocking was my little Classic Black Stallion.  He was another I almost didn't bring - "he's too old", I had thought.  But he looked like he was in decent shape and I wanted to have my limit of 3 in the Arabian Stallion class, so he got to go.  He won the Arabian Stallion class and the judge overheard my excited, "Oh my goodness!!" when I saw him standing proud with his blue ribbon.  She told me that, for her, age came before newness; she considers the age of the model, and condition, not just if they are the newest one.  I was overjoyed with his win in the class and I put him back on our table with the others and hurried back to the judging table with my entries for the next class.

At some point, I noticed that the costume class was going on at the performance judging table and I went over to take pictures of some absolutely stunning Arabian costumes!:


A brief side note here...  Last year, Breyer started a Live Show Benefit program where they offer an exclusive model to certain approved live shows, to be given away to one of the entrants.  You can read about the program and see this year's horse here.  I knew they were going to give away a Lionesse at the show, but I hadn't thought anything of it...

Until I was taking pictures of the Arabian costumes and heard the announcement: "Bobbie has won the Lionesse!"

I was in absolute shock!  I've never won anything like this.  I've always joked about having the worst luck, I never win any type of drawing.  But it was true!  They handed me Lionesse and took my picture, then I carefully carried her back to our table, beaming, to show Jeff.


On the way back to our table with her, the OF judge stopped me and said "You have my 1st place Arabian stallion".  I looked at her judging table and all of the 1st and 2nd Light Breeds were there for the Champion class.  Oh!!  I grabbed my little Black Stallion and the only spot left for him was right in the middle of the table.  Most of the other horses were Traditionals - the largest size, while he is a Classic - medium-sized.  He was sort of lost in the larger crowd.  I said aloud, "Good luck little guy" and left him there.

I grabbed the camera again and went back to taking pictures of the Arabian costumes, trying to capture how beautiful they were: 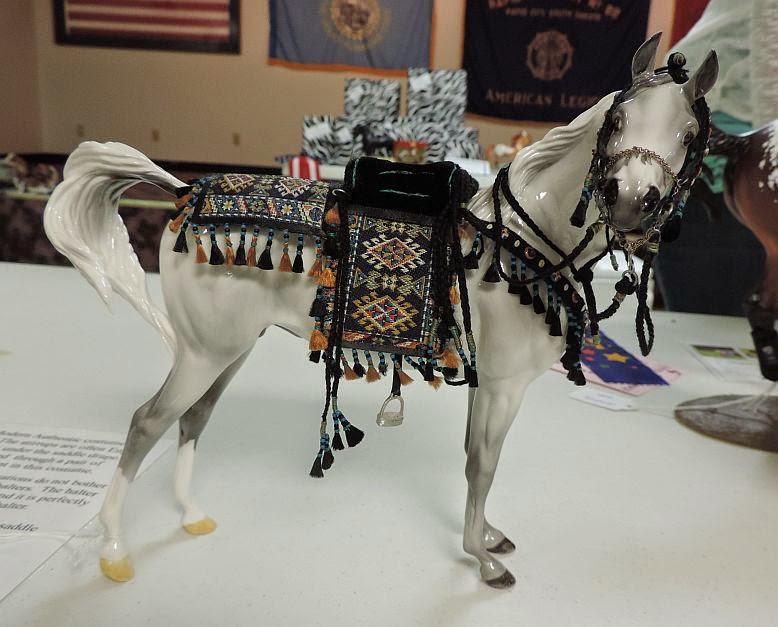 I heard some conversation behind me and heard a young girl say "Oh, the Black Stallion!"  I didn't think anything of it, I thought she had just recognized which model my guy was on the show table behind me.  Then the judge called out the Reserve Champion and for Champion she said "Darkness Falls"!  I turned around in complete shock, for the 2nd time in a 5 or 10 minute span to see my little guy, in the middle of the table, surrounded by big, gorgeous horses..  with his Champion rosette:


The judge told me that he has so much presence on the table, she said he's just standing there like, "Yeah, I'm hot".  I was over the moon, I never, ever would have expected this!


Finally, where the performance judging had been, it was time for Custom horses.  I was so nervous, I felt sick!  This was the real reason I had come, to get my little painted ponies back out in the show world and see how they did.  One that I was most excited about was the results of this class.  There was a mix up in judging and the Gaited breeds classes had been skipped.  I was concerned, because I had brought 4 gaited horses (2 and 2) for the two Gaited classes.  The judge ended up telling me to enter them in Other Sport.  I ended up having to drop one of my entries, because I could only have 3 in a class.  Here were the results, my little "Crown Royale" ended up winning the class!  She is one of my older customs, but one I have always liked:


The custom division ended up giving me quite a workout.  There weren't many customs being shown, I think only 3 of us had entries.  So the classes were moving fast and I had entries in almost every one.  I was rushing back and forth with horses, ribbons, cards.  And in the midst of it all, the OF judge called for all Champion and Reserve OF Breyers to return to the table for the Overall Grand and Reserve class.  I scooped up Darkness Falls and his ribbons and rushed him to the table.  The table had filled up quickly and again I had to squeeze him in somewhere.  I said to myself, "He has NO chance", as I looked at the stunning horses he was up against - all Champions already, having beaten lots of other horses in their divisions.

I went back to ferrying my little custom horses back and forth and was taking a quick break at our table when I heard a little girl say, "The Black Stallion, of course" ...  I thought, what..??  The judge called out the Reserve Overall and then she said: "Overall Champion is Darkness Falls".   I could NOT believe it, but there he was, pile of ribbons, and his "mystery prize".  (all Overall Champions were awarded mystery prizes, wrapped in zebra print paper)


Shortly after this was the Custom Championship class, I was so stressed about getting them all in - I had to make 3 trips to carry them since I'd ended up with most of the custom entries - that I didn't get any pictures of the class.  I didn't end up with any Championships for my customs, but I was overjoyed that so many of them qualified for the Nationals and I was OVER THE MOON with the rest of the events of the day.

Oh!  As if everything wasn't enough, I also won a raffle prize!  The grey horse in the box behind my OF Pacer:


Here are a few quick pictures I took at the end of the day.  I packed away everyone else, except for all of the Nationals qualifiers to get pictures of them all together.


For the laser, we did sell a few ornaments and also took our first custom order for the product line we are focusing on now (the wooden tributes and ornaments).  We talked to several people about the laser and what we do throughout the day and handed out business cards.  I think it was a good little first outing for the laser business as well.

At the very end, we went out to dinner with the show host and a couple of other people who attended.  It was a GREAT day and I am still over the moon!

I have just two days to recover and pack up, then I'm hitting the road to go to another show!  I'm not sure it could ever top this one, but I am excited to have the chance to go to another one already.  Unfortunately I'm probably not going to have time to finish many more customs (if any) before I go.  However, I am going to be there a couple of days early and am hoping to have some time at the hotel to maybe put the finishing touches on some that are close to being done.  I'm going to pack up my supplies to take along, just in case.